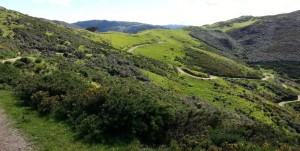 A varied group of people we were. From unemployed I.T. Geeks to people who had to attend work phone meetings even on the Saturday! Yes – one of us had to be in on a phone meeting for at least the first few kilometers. Personally, I would like a job like that – going for a trek and getting paid at the same time!

Someone in the group must have prayed well to the weather gods. The sun shone and we filled up the Karori bus with 7 trampers near the Tararua hall shortly after 9am.

The walking track starts about half a kilometer from where the bus leaves in Karori. Gentle ascents and descents all through. If you trust the technology, during the entire trip, we climbed up 666 meter up and came down 659 meters. Most of the time, we were walking on treks that could accommodate 2-3 people side by side. So, it is a good ‘chatting’ trek – if you are not busy taking photos and then running to catch-up with the group.

Be aware that the trek runs through a few farming properties. So if you do not like cows, or 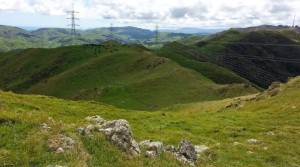 Although cow ‘traces’ could be seen on most of the track, the track was not smelly. There was enough wind to move the smell towards our neighboring country! The dots towards the center of the picture, are not dots. They are cows. No cows were harmed in taking of the picture above.

It was such a clear day that we could see the South Island’s snow covered peaks. The mountains looked so close that we debated if they moved the South Island a bit closer overnight.

Above, you see some beautiful trampers… and of course, beautiful views from Mt Kaukau. Sure those trampers look tired and hungry – it was lunch time after all. 12:56:28 to be precisely precise. So, it took us 3 hours and 2 minutes and not sure how many seconds (ah – I am slipping!) from the bus to the top of Mt Kaukau.

Once we got up to Mt Kaukau, the group had 2 choices. Go down to Johnsonville and

catch the bus from there. Or, go down to Khandallah, grab a beer at the pub and then catch the bus. The choice was easy. They did not even want to wait for the official photographer! Evidence above.

Experienced trampers should add “a scooter” to the most meticulously prepared “What to bring for the walk”. Yes – one tramper did bring a scooter along!

The technology says that the entire trip was 13.21 Kms long from where the bus dropped us till the pub at Khandallah. It took us AROUND 4 hours 21 minutes and 51 second approximately. Spent about 2717 calories – you just have to trust that.