When Gareth asked me for the sixth time “have you committed to the Jumbo-Holdsworth?” I weighed up the pros and cons for the sixth time. Pros – no time left to do any training, have run the route before and enjoyed it, unlikely to be snow this time. Cons – have not done any training, unlikely to be snow this time, have run it before so no excuse for getting lost. “Ok I’m in” I replied.

With Gareth in charge I knew things would run with military precision, it would just be a question of which military. We left the railway station precisely 30 minutes behind schedule. We arrived in the Wairarapa to discover that Eddie’s running shorts were in Wellington.  No matter, it being David’s first ever trail running event he had brought along two of everything.  One pair of running shorts was duly transferred from David to Eddie.   David takes the two of everything principle very seriously. After his kebab he went in search of fish and trips. Gareth was so impressed he let him eat them in his car.

The Jumbo-Holdsworth starts at 8am so if you aren’t local it makes sense to drive over the night before and camp. We arrived at the Holdsworth camping ground as it was filling up with tents, caravans, dogs and bonfires. Dmitry and I both had standard tunnel tents, the kind that a couple of people and take a couple of minutes to pitch. You may be familiar with them. People take them tramping.  After we’d pitched our tents I thought Dmitry would busy himself adding smoke to the existing fires but we were both distracted by events unfurling in front of us.

With a moderate degree of fanfare David unveiled a borrowed tent big enough to house the entire WTMC membership. Working alone he was able to erect it in under 2 hours. Eddie had a similar model in a different colour.  Erection time = 1.5hours. Eddie had obviously done this before. “Lucky this camping ground is enormous” I remarked to Dmitry as we munched chocolate chip biscuits while watching, Gareth as he grappled with his monstrosity complete with a king size flax mat that took pride of place outside his backdoor. We thought it prudent not to attempt to time his erection.

Gareth woke us at 6am so we would have time to eat our breakfast before race registration.  Breakfast passed without incident if you don’t count the grass fire that started when the cooker tipped over.  Some quick thinking by David meant that the Rural Fire Service got a lie in.

The waiting round before a race starts is often the most stressful time. Eddie retreated into his tent. Dmitry paced. Gareth sunbathed on his flax mat. David asked for advice. Gareth’s response cut to the heart of the matter. “Whatever you do don 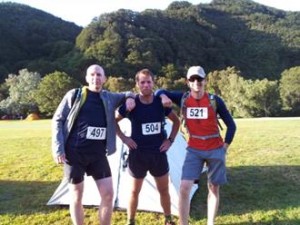 ’t come last”. Dmitry stopped pacing and smiled as the rest of us watched the colour drain from David’s face.

8am and we’re off. Bit of a false beginning as there is a swing bridge close to the start which means queuing to get across, only after that does the race begin in earnest. This year we had the choice of doing the race clockwise or anti-clockwise. We, along with the vast majority of competitors elected to run the race clockwise. The first section is an easy amble along the mostly flat Atiwhakatu track then you head up the Rain Guage track to Jumbo Hut (1105m). The Rain Guage is steep but not particularly long. The trick is not to try and run up but to tramp as quickly as you can checking your altimeter from time to time for motivation while staying on the route. Some competitors found the last bit tricky.

From Jumbo Hut we were in sunshine but fortunately there was a bit of a breeze making running conditions ideal. We headed across the tops to the summit of Jumbo (1405m), then south to the Mt Holdsworth trig (1470m). As the Tararuas were experiencing their first summer in living memory conditions were unusually dry. Even the bits that are effectively a bog were not very wet if you picked your line with care, ( I didn’t). The views were special – coast in both directions and wave after hilly wave of tanned tussocks shimmering in the breeze. There was plenty of action to keep your mind off your physical outlay as you simultaneously greeted and jumped out of the way of the runners coming in the other direction.

From the trig I carefully descended to Powell Hut (1160m). Jet plane lollies were on offer here but I elected to push on thinking I’d make up some time. This turned out to be a false economy as I promptly fell over.  From Powell it is all downhill which makes for a reasonably pleasant finish. I enjoyed the descent as we were back in the shade of the bush and having not gone too fast in the beginning I had plenty of energy left. I caught up to another bloke and we took turns pacing each other in an effort to lift our spirits and speed.

I hadn’t seen the rest of the team since the swing bridge so I was pleased to see them at the finish line happy, healthy, personal bests all round and seemingly keen to do other events. Runner’s highs all round. We stuck around for the race barbecue lunch and prize giving. The race was won by a young English lad over here on holiday in an impressive time of 2.22.45. Talking to him afterwards he said he’d enjoyed the experience although his mates had been dispatched on a mercy mission into town in search of beer. He had won quite a bit of wine but preferred beer. Eddie has far more luck picking up a six pack of boutique beer as a spot prize. Dmitry won a sponsors t-shirt and I went home with a drink bottle which I couldn’t give away. 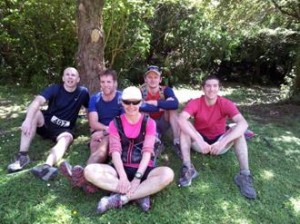 This family friendly community event is chilled out and fun. There are loads of spot prizes and plenty for spectators and supporters to do while waiting for the race to finish. If we’d had any supporters with us we would definitely have put them to work striking the larger tents. As the main run is only 24kms it only takes up a morning leaving you with time to explore other aspects of life in the Wairarapa if you want.  I’d recommend it as a great day out for any aspiring trail runner. What did I learn from the experience? Doing the race clockwise is easier than anti-clockwise, it is uncool and surprisingly painful to fall over outside Powell Hut and most importantly, tent size matters.