After a slightly bleary-eyed 7.30am meet on the Saturday morning, a club minibus jam-pac 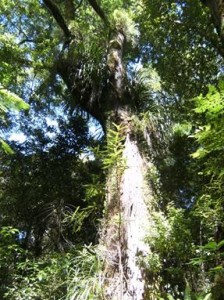 ked with sleepy trampers left for the Tararuas in hot pursuit after Illona’s car. As a tramping-virgin, I had been warned about the mysteriously misty, murky and muddy Tararuas and had sat through various club presentations picturing drizzly-looking forest and decidedly damp-looking trampers. But as we neared the drop-off point, I began to suspect foul play as surely these beautiful ranges with luscious vegetation, cloudless blue skies and balmy breezes couldn’t be those same Tararuas?

After a scenic drive punctuated by tramper’s snores there was a scramble for packs, second breakfasts and suntan cream. Then the mediums were off and the easy-mediums received their briefing from the nature guide Illona. Armed with identification sheets and our incredibly knowledgeable guide, we set off into the wild to learn about the Tararua flora and fauna.

Yes the sun really was shining 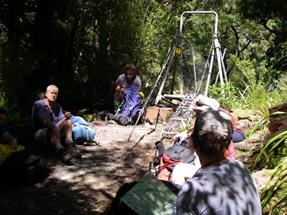 through the canopy (left) whilst team tramp re-fuelled (right). Can you identify the flora and fauna in these pictures? If not, maybe you need to go on a flora and fauna tramp…

Illona introduced the flora and fauna by clever word-plays and tactile investigation. We discovered that Rimu fronds are distinctly stroke-able but that some are more stroke-able than others and if the fronds are too high to stroke, that Rimu can be distinguished by the contour-like patterns of its bark. We learnt that Rata is a hugga, starting life as a s 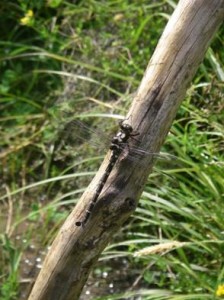 eed deposited in the crux of a lofty branch and letting down exploratory Rapunzel-like roots to the forest floor, giving the Rata trunk its distinctly twisted shape. We now know that Mānuka is mean, with spiky leaves and honey-pie-shaped pods, whilst Kānuka is kind with stroke-able leaves (although not as stroke-able as Rimu). We were told that some ferns wear skirts, some have silver linings and others fuel the whole chicken-and-egg debate. We debated whether the kidney fern really does look like a kidney (no one was prepared to use a knife to find out) and decided that the pepper tree did indeed taste peppery.

So much for the green stuff – the fauna was much more elusive and in being able to run/fly/swim away was more challenging to gain an introduction too. But we learnt to identify the song of the grey warbler and had two juvenile male tomtits join us for a snack break (just to clarify we were eating scroggin, not the tomtits). The fan tails and silvereyes needed no cryptic word-plays to stick in the memory. We also saw some very funky 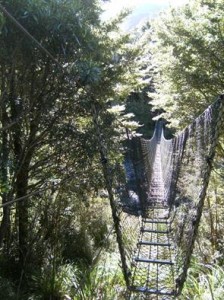 The Saturday tramp was fairly leisurely with plenty of snack breaks and pauses for pearls of flora and fauna wisdom. Once we made it to Roaring Stag Lodge (or hut, as would be a more appropriate name) we baggsied bunks and put up flies.  Someone put the billy on and we all had hot drinks whilst contemplating the next move. A quartet of brave explorers went swimming in the slightly-too-cold-to-be-refreshing stream and proceeded to conduct a scientific study on the feeding preferences of local biting bugs. The official results from this study are pending but preliminary investigations indicate said bugs prefer Brits to Kiwis and within the Brit category preferentially feed on brunettes over blondes. Who said blondes had all the fun? Following the feeding experiment the majority of the party set off to explore for more flora and fauna just over the stream from the hut. Whilst negotiating the swing bridge I gained a twisted knee to add to my insect bites but continued regardless in search of flora and fauna. 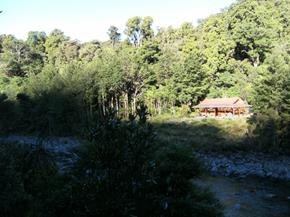 As the shadows claimed the forest around the hut and closed in on the hut clearing, team tramp co-ordinated to create the gourmet three-course group meal. Starter: a selection of local cheeses with rice crackers. Mains: quinoa with feta, chick peas, eggplant, courgette, peppers, nuts, garlic and onions. Dessert: yummy short bread biscuits. Dinner entertainment: studying the calls of forest birds via Illona’s ipod. Once the washing up was done, we set off for a night-time expedition in search of the nocturnal forest and stream fauna armed with head torches and binoculars. Intrepid Illona found crayfish and an unidentified spotted river fish and team tramp searched for eye-shine using their head torches and binoculars. The most common finds were spiders, including some freaky scorpion-imitating s 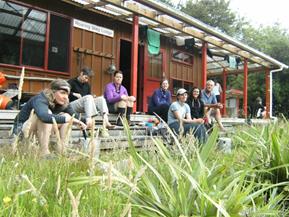 piders although I reckon I won the eye-shine competition with the big red eyes of a possum lurking near the long drop. Said possum then proceeded to serenade Illona in the wee-hours as she cursed illegal Australian immigrants under her fly.

Following a sleep punctuated by light snoring, a civilised lay in and leisurely breakfast, the next morning saw a shift in team tramp dynamics. 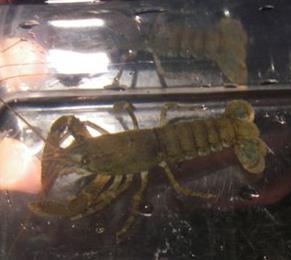 completely take away the pain of my twisted knee. So my very generous team mates took on various items from my pack to lighten my load and Illona made me a sock stick to help me negotiate the trail home. Feeling a bit like Gandalf, but slightly less sprightly, I set off on an unexpectedly slow journey home. It soon became clear my load needed further lightening so I took Marie’s pack (very light) and Marie took mine (not so light). I also gained another stick so I could feel less like Gandalf and more like a cross country skier, but significantly less sprightly. At lunch stop, Marie’s pack was confiscated by Illona the heroine, who carried both packs on her back as lightly as if they were match boxes, whilst I scrambled pack-less down the track. As the majority of team tramp marched on, the rear was brought up by Marie, Illona and I, whilst I entertained my chaperones with strange morphine-fuelled tales. With the aid of my trusty sticks and some very elegant bum-shuffling on the steep bits, I made it back to the club va 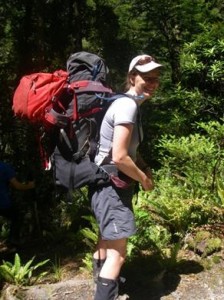 n. The packs and people were loaded and Illona chauffeured me home with the odd stop to collect frozen peas.

So, as my virgin-tramp, it really was an adventure! Not only did I learn about NZ flora and fauna (which being a Brit I previously knew nothing about) but I also learnt one of the most important tramping lessons – teamwork. Without the help of team tramp I would have been stuck at Roaring Stag being bitten alive by bugs for a 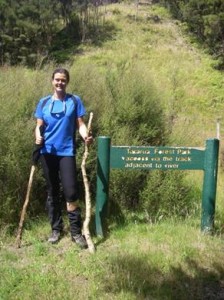 very long time…. So thanks team for helping me home. I would strongly recommend an Illona-guided flora and fauna tramp to really appreciate the lush forest that so many just stomp on by. When my knee has finished its current hissy-fit, I will be throwing the sticks aside and taking up my pack again, so watch out for the limping, bug-bitten brunette Brit! I’ll be back…