Having attended the obligatory two club tramps before becoming a member, and a trip leading session, it was appropriate to contribute in a small way by volunteering to lead a trip.  Encouraged by my brother in-law Mike and the fact that a number of other trips were planned around Nelson at the same time, this looked like a good place to start.

In the end two Nelson trips went ahead: this one, and a tubing trip down the Pelorus River.  Mike and I were the only confirmed MTB starters until the late entry of one of Mike’s work colleagues, Julie, and partner Thomas for the final day of riding.  Although the trip involved some complicated logistics and Christmas delays, with a little bit of guidance from other club members, leading was not at all daunting.

After meeting at the railway station and wrestling bikes onto the van we join the queue for a smooth Cook Strait crossing.  It’s after 11pm when we arrive at Pelorus and put phase one of our plan into action.  Maungatapu road is hard left after the bridge and we find a likely spot after about 2.5km to hide our stash bags, containing food and camping gear for Saturday night, in a place we fondly hope will not be visible in daylight.

WTMC members Hans Wiskerke and Mika Verheul have very kindly opened their brand-new home in The Brook (Nelson) to us.  We start b 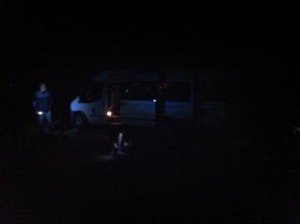 y sadly abusing their hospitality; arriving at midnight there’s time for a quick round of hellos and we let them go to bed while we take the tubers to the Hacket Stream road end.  It’s a fair hike and we leave them in the dark pitching tents; they can take their story up from there.  A bit after 2am we let ourselves quietly into H&Ms house and crawl into our sleeping bags.

Saturday morning starts cool with a high overcast; a good day for biking.  The Maungatapu Saddle is a well-known route with some history, it features in the Kiwi Brevet, and there are plenty of blogs that mention it.

We pick up the trail at Sharland Hill on Brook St a bit after 10am.  Old Codgers Track and a gravel road take us up to Tantragee Saddle (190m) before a brief plummet into Maitai Valley.  Almost immediately we hit a road closed sign and are diverted about 70m up a steep track to follow the city water main for about 3km as it sidles up the valley.  The road is apparently being sequentially ripped up to lay a new main in the valley floor.

A left at the next intersection takes us up a steepish hill to the Maitai Reservoir caretaker’s house (240m).  At the top the Maungatapu Road is easily identified by various road closed signs (internet information was quite clear the road was closed only for 4WDs).  On the topo map this is the point where you depart from the marked gravel roads.

We drop to the Maitai Reservoir then traverse up and down above the east side on a 4WD track that gets gradually rougher.  Leaving the reservoir behind there’s a short rocky climb through a gorge to a bridge over Maitai River North Branch (240m again). We stop for a bite and to fill water bottles.  The overcast has cleared and the day is hot.

Looking at the map with trampers eyes, the contours are quite a way apart so it should be an easy climb on a flat spur between two streams.  Wrong.  Steep on foot is a lot steeper on a bike and you can’t use your hands.  The climb steepens and the periods where we have to push become more frequent until there is far more pushing than riding.

The beech canopy is open letting the sun pour down but provides few view spots until about 560m where a pylon clearing opens a window across Tasman Bay.  Nelson is hidden below us, and above are the bare slopes of Mt Dun (1129m) and the steep bushed Little Twin (1143m) looking down on the Maitai catchment.  The wind has picked up and we linger to enjoy the view, cool down and avoid pushing bikes up hot hills for a few more minutes. 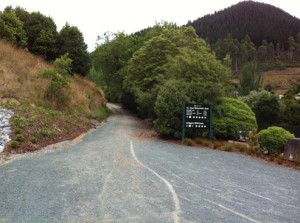 n the west and across ranks of hills towards Picton in the east.  The views are good and rata is flowering spectacularly but still, it is not a pretty place.  Pylons march through and vehicle tracks and erosion have left a bit of a wasteland in the saddle.  We take a few record shots before turning to what we have been anticipating: the descent.

The down side is anything but.  It is all ride-able and as fast as you like.  A little rocky at the top, it is still a better surface then the Nelson side. Pausing occasionally to regroup we hang on down the first steep, rocky sections then cruise at a good pace the rest of the way as it sidles down the Heringa Stream catchment.

Shortly before the exit onto Maungatapu Road, the Pelorus River comes briefly into view.  It is an improbable light blue/green, looking for all the world to be glacially fed (which it ain’t).

The ride feels like it is over but there is a small matter of 12 or 15 km to go; mostly gravel road climbing and dropping around the tributaries of the Pelorus.  However, it is good riding and shortly after hitting the seal we spot the paddock where our stash hopefully lies unmolested.  Mike has chosen well; the packs are indeed invisible from the road.  We fish them out and ride the last few kilometres arriving around 6 hours after leaving.

Cold drinks and ice creams are the first order of the day.  The café has a good selection of food and excellent sized ice creams.  Somehow dehy doesn’t appeal and it’s lasagne and chips for an early tea (the café shuts at 5.30).

I’ve stopped many times at Pelorus and occasionally visited the café but was completely unaware of the delightful camping site a couple of hundred meters away.  We pay our $12 each and follow the driveway which breaks abruptly from the trees onto a manicured lawn.  Hemmed around by forest it positively nestles next to the river which has, very conveniently, cut a rocky channel in front of the dining room.  The building is dwarfed by a stand of rimu which merge into the deck.

The facilities are new and clean and the showers are hot.  We bask in the evening sun to the sound of cicadas and a lone warbler before turning in early, to make up for last night.  We don’t wait up to see if we can spot the long tail bats for which the area is known.  The population seems to have survived due to roosting spots in the tall rimus, above easy predator access, with the local street lights attracting a smorgasbord of insects.

In the morning we drop our packs at the office to pick up on Monday and a little before 9am start to retrace our steps.

We keep company for much of the return trip with a Californian towing a trailer.  It would have weighed 30Kgs at least, yet he rides and pushes it to the top in the heat.  And he had dragged the thing through the Queen Charlotte track over the past two days. 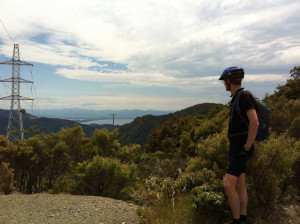 We leave the Pelorus River, which is a darker green today, and start the climb.  There is less bush cover this side so it can be brutally hot on a sunny day; the few shady stream gullies are very welcome.  It is ride-able to Murderers Rock (4.3km from the top) where it becomes steeper and rockier.  If you are strong and bloody minded enough it is ride-able to the top (more so than the Nelson side).

Murderers’ Rock bears a mention; in 1866 the Burgess gang killed and robbed a lone prospector, then a party of four the next day.  They were picked up in Nelson within a week, whilst spending their gains.  With the help of one turning Queen’s evidence, the other three were hanged for their efforts.  The rock is easily missed; on a bend 4.3Km from the top, just before a short drop to cross Kohuru Creek.  It is marked with a vandalised plaque on a white post (left side of track going up).

We are at the top by 12 but some of us have already demolished their water.  Fortunately we know that the lunch stream from yesterday will be less than 20 minutes downhill from the top.

The decent is steep, loose and exciting.  The technique is to carry as much speed as you are comfortable with, and make sure the front and back wheels progress in the right order.  If you start getting in trouble; speed up.

At the lunch spot we sit in the shade to wait for the Californian.  He arrives, after having to walk down some of the steep bits, to discover that what had been a delightfully gurgling stream with clear fresh pools has disappeared completely overnight.  We promise that there definitely is water a little further on and set off down what proves to be, although short, the most hairy section yet.

At the bottom we resist the urge to swim in Nelson’s water supply and sweat over the lumps, di 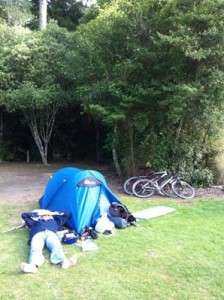 ps and the final rise to the caretaker’s house for a rest under a tree looking up at the Bryant Range.

For the final ride into Nelson we follow the single track on the true left of the Maitai river.  This is a very pleasant meander passing deep swimming holes full of hot Nelsonians.

Back in Nelson before 3pm, the bikes dangle from the verandah while we cool down and have a bite at the Sprig and Fern.

That afternoon it is Hans & Mika’s housewarming.  When we turn up, festivities are in full swing, as friends, neighbours, and a sprinkling of WTMCers are chatting and enjoying the sun.  Lindsay Fletcher, and Steve & Jenny have come down for the event.  The promised Dutch hospitality lives up to its reputation with plenty of food including Han’s excellent Gember Kruidkoek spice cake, and good conversation.  The trampers are of course the last to leave.