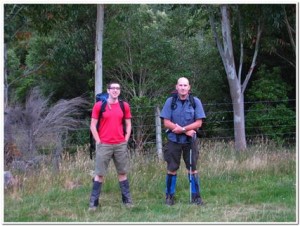 As we were doing a crossing we had a few transport logistics issues.  We left Wellington Station on the 5:30pm train bound for Masterton, a lovely scenic ride, with the goal getting a pickup from the MF Blackwater-Makaretu group on the Sunday afternoon.  We arrived in Masterton a bit hungry and in no real hurry, so had a sit-down feed at a great little Chinese restaurant, a bit of a luxury for a pre-tramp Friday night dinner.

We caught a taxi in to Pines, which cost us about $60 (not too bad split three ways) and walked in to Mitre Flats arriving to a half-full hut at about 12:00am.

We made a fairly quick getaway the next morning, and headed straight up Mitre.  Sadly the winds started picking up from near the bushline at about 900m, and we were getting blown off our feet more or less constantly at the ridgeline at about 1100m, so after a quick team talk we made the difficult decision to turn around.  Sometimes in situations like these the decision will make itself, but unfortunately this wasn’t one of them.  The open tops weren’t completely impassable, and if we desperately had to get to Tarn Ridge Hut for some reason or other then we could have probably made it, but it would have been a miserable day’s crawl over the tops to Arete or Te Matawai.  As we turned around we couldn’t shake the feeling that we had technically just piked out.  Sad to have the Tararua weather get the best of us yet again.

As we didn’t really have anywhere to go — and didn’t have any transport either way — we decided to head for Kaitoke, and after a relaxed lunch back at Mitre Flats Hut we made Totara Flats on the Saturday night in 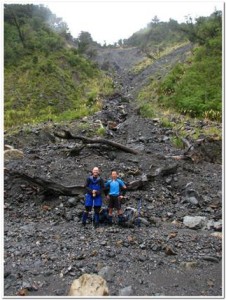 about 13h.  We passed a busload of people doing the Holdsworth -> Jumbo -> Atiwhakatu loop and they were all looking pretty sad and miserable, and they only would have been exposed to the wind on the tops for an hour or two, so that reinforced for us that bailing out was probably the right call.

After a chicken satay noodle dinner we had an early night, and a relaxed start on the Sunday.  But all three of us were struggling a bit on the uphills, so at the turnoff for Cone Ridge we instead decided to pop out to Waiohine carpark.  We had a feed, and were about to start walking towards Carterton when we got offered a ride, and then after another feed offered a return to Wellington, so everything worked out well in the end.  We even managed to get a call in to the MF group cancelling our ride home, after keeping them waiting for us for only an hour or so over a coffee, so a good result all around.

Was a good weekend, and we all agreed we should bump the Northern Crossing trip up the spring trip schedule so we can have another shot at it.