Being an Irishman I am accustomed to inclement weather letting an occasion down and was hoping that this wouldn’t be the case over Labour weekend. Luckily enough the weather Gods took pity on this group of mostly beginner kayakers and offered pleasant sunshine and reasonably calm waters for three days and 68 km of kayaking (slightly less for those who sailed into the Nydia beach campsite).

The ride over to Picton on the ferry wasn’t so calm and there were a few green faces aboard. However the groups showed resolve that boded well for the trip and were left unscathed by three meter swells in the Cook Strait. A quick van ride to Sea Kayaking Adventures in Linkwater and we were ready to hit the hay on the concrete floor of the Sea Kayaking Adventures premises.

After an early start we packed our double sea kayaks and received a safety briefing. Once we hit the water at Ohingaroa Bay, any nerves that the safety briefing had generated were alleviated when we felt the sturdiness of our kayaks. Jenny, Mike and Kevin offered stroke advice and ironed out any technical kayak issues early and soon we were in our rhythm and already clocking up the kilometers on Richard’s GPS. 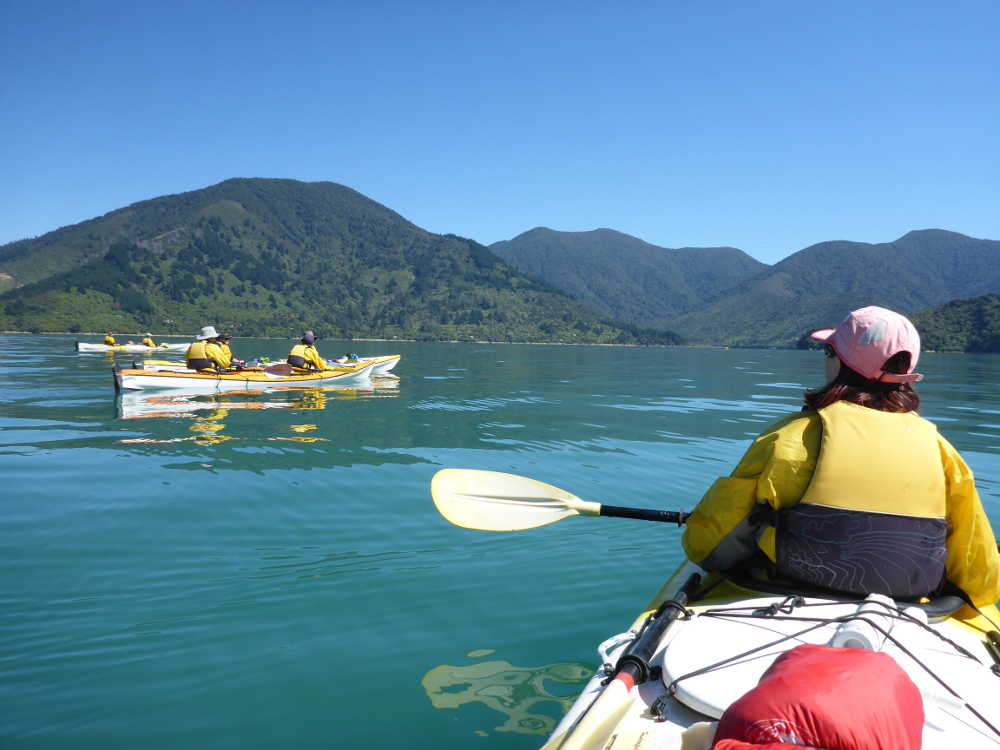 The sandflies struck early while we ate lunch at Pipi Beach, which encouraged us to keep on the move and soon we were on our way to the Nydia Bay campsite situated off the Pelorus Sound.  As the wind tended to pick up in the afternoon, things were a bit choppier as we crossed Nydia Bay to Penguin Bay and this gave us a taste of what a bit of chop and wind felt like. The wind also inspired Kevin to perform his best impression of Captain Cook, roping together a raft and crew made out of a fly, 4 kayaks and 8 volunteers. The going was slow but the sailing was effective while the rest of us made our way at our leisure to the cozy Nydia Bay campsite. We arrived just shy of 5pm having covered 22 km on our first day. 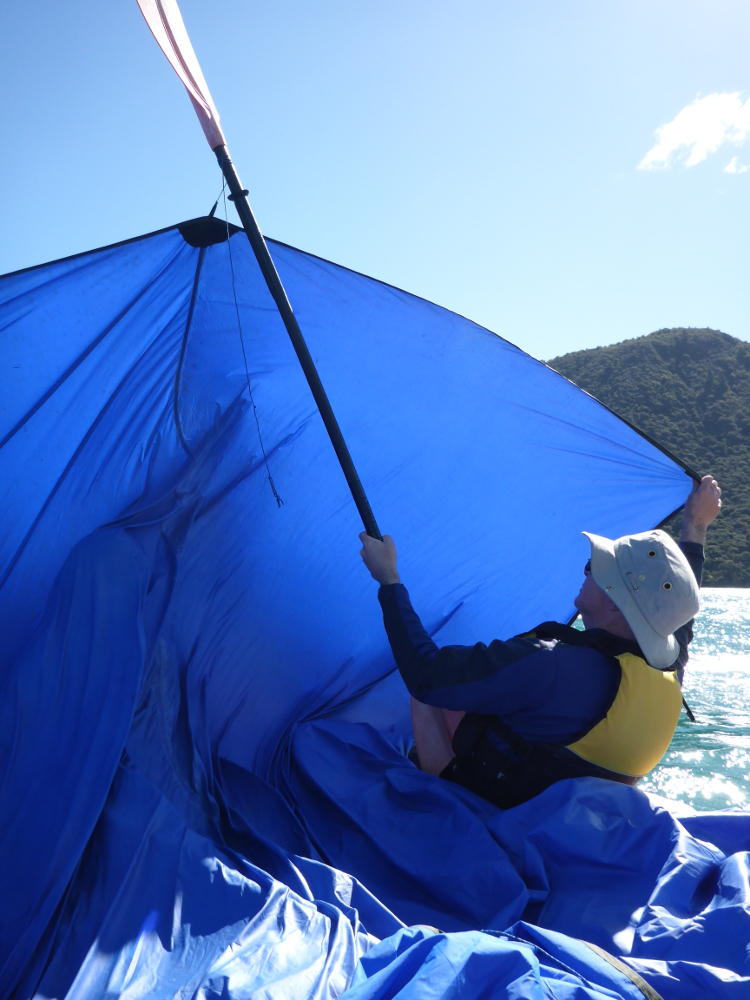 After being woken up by an unbelievable chorus of birds, day two saw us depart for Ferndale Scenic Reserve. This involved making our way back up the bay and into the Pelorus Sound before heading south to Kenepuru Sound where our campsite awaited. This was our biggest day, covering 28.5 kilometers and counting many jellyfish. One casualty of the toll on the body was Bart who managed to briefly fall asleep on his kayak before regaining his composure, while it became apparent that Jim and Richard had plenty of energy in the tank if anyone needed a tow. Our arrival at the Ferndale campsite saw many members of the team jump in the water for a quick dip to cool off before quickly retreating to their tent. We later gathered for some delicious risotto and fruit salad. 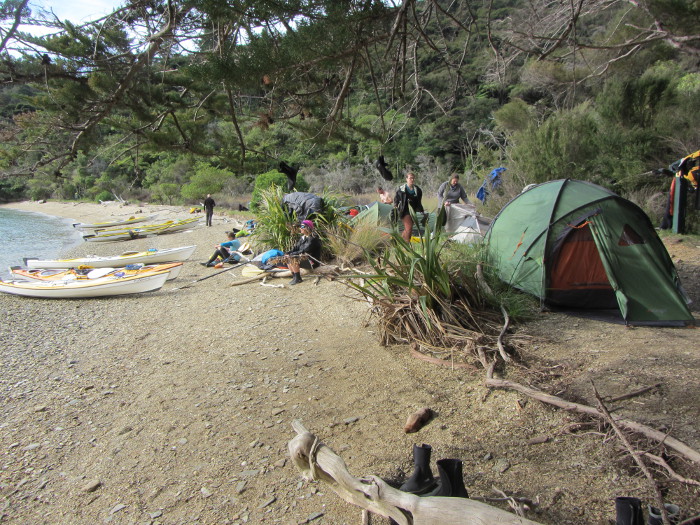 Day three was about taking it easy and exploring the shoreline as we made the 18km trip back to Ohingaroa Bay. Along the way we explored the rusty old shipwreck the Amokura. The shipwreck has a decorated past, built in Scotland before serving in the Congo and making its way as far as the Sub Antarctic. It is now slowly being reclaimed to the sea by an army of mussels and oysters in St Omer Bay. 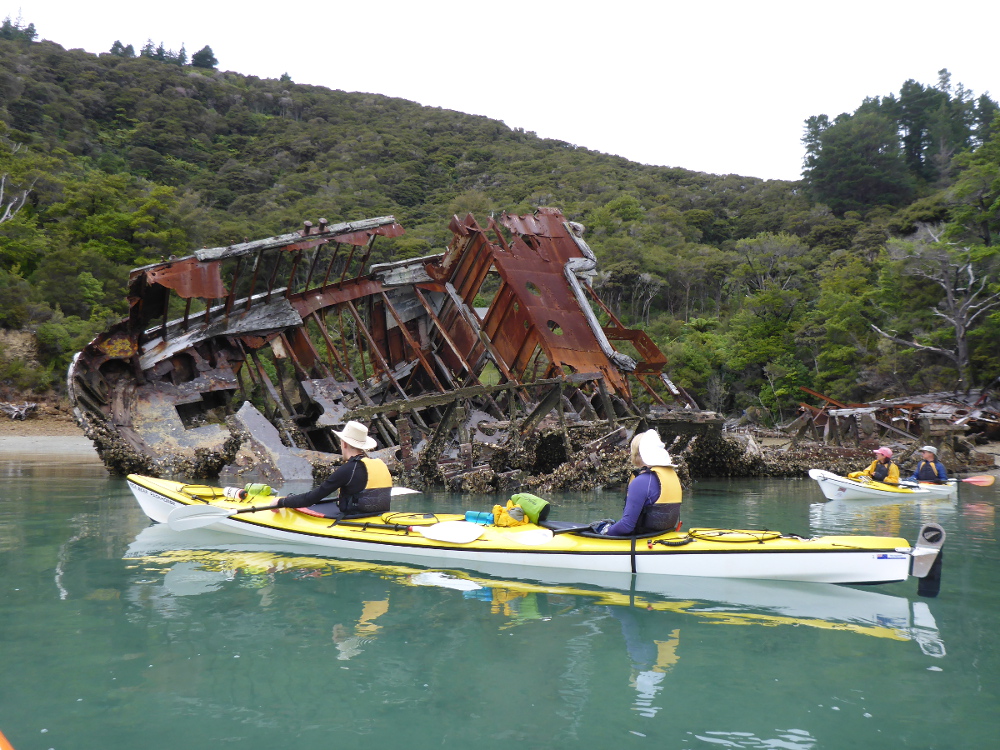 Our relaxed pace was interrupted only to line up our kayaks for a race start between some mussel lines with Bart and Rosanne taking home the victory. 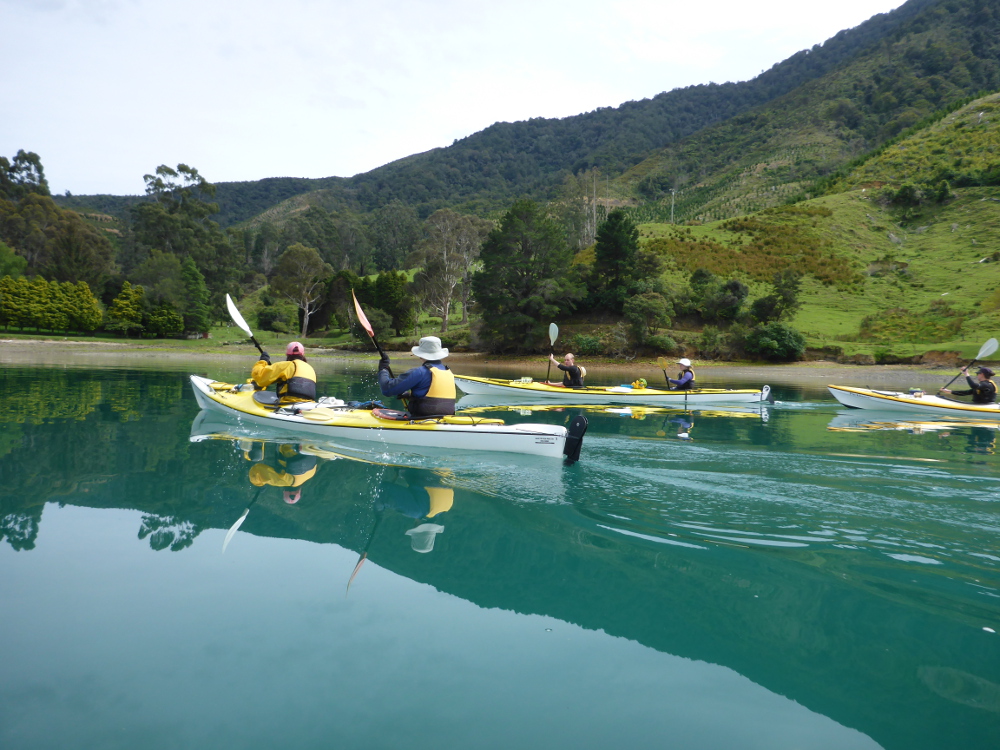 Later we arrived back into Ohingaroa Bay at 2pm, to beach our kayaks one last time before being picked up by the expert and friendly service of Sea Kayaking Adventures.

Overall this was an amazing trip especially for someone who hasn’t experienced the sounds before. The sun held out for us, so thanks to Kevin for picking the right weekend and for organizing the trip. A big thank you must also go to Jenny and Mike for keeping a watchful eye on us and offering coaching for anyone that wanted it. It was hard to believe we covered 68km but everyone felt comfortable and no one was pushed beyond his or her limits, which made for a happy group that really enjoyed a memorable Labour weekend.