Gripping tightly to the pack straps of the people next to me in the line, we took our first steps into the Orongorongo River with the roaring water buffeting us around. “Brrrrrr its freezing” I thought as the liquid snow soaked through my shoes.

“Brrrrrr its freezing” I thought as I stepped out of the car. Had I had known how cold the river would be later in the day, I might not have got out of the car. But as it was, I couldn’t wait to get going. I looked up at the snow capped mountains thinking “I can’t wait to get up to the snow”. After all the goodbyes and some more talking we set off. 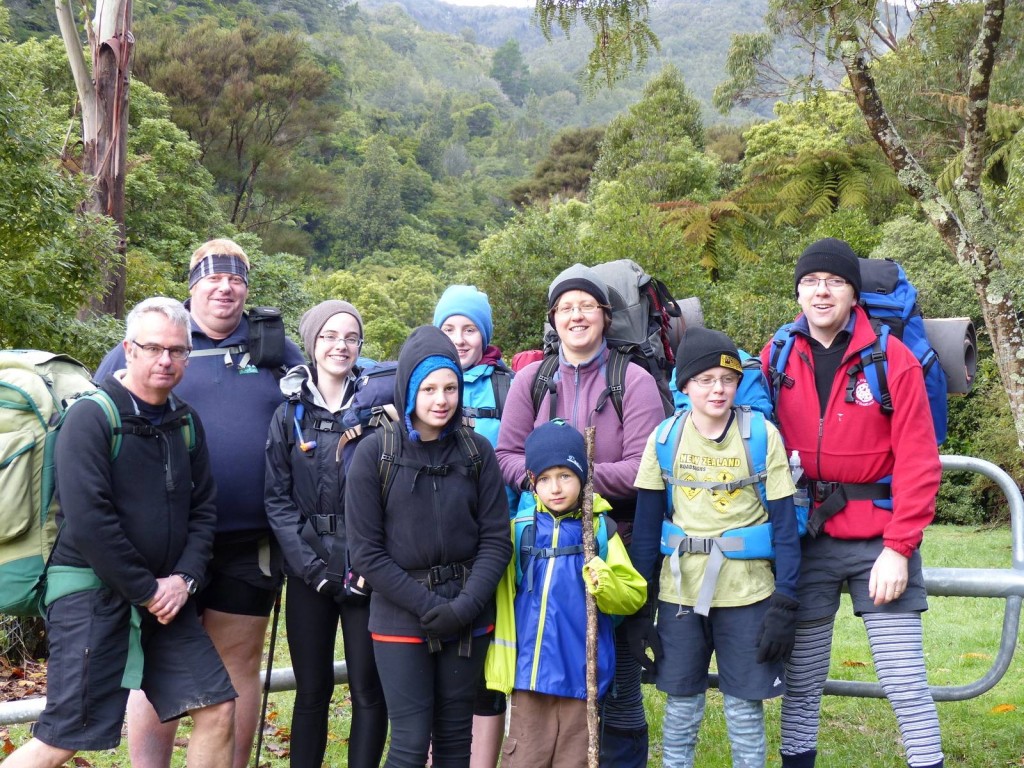 The weekend coincided with a patch of fine weather following a massive storm that dumped snow on the low hills around Wellington.

We were climbing steadily for about half an hour before we saw the first patch of “snail” (snail is snow that’s not quite snow and not quite hail, it’s right on the border between the two). All us kids made a plan to ambush the adults with snowballs. There was carnage with the parents retreating and us kids happy at the win.

We kept climbing at a steady pace and soon discovered more snail, this time with fresh kiwi tracks! It was the closest I ever been to seeing a real live kiwi in the wild. 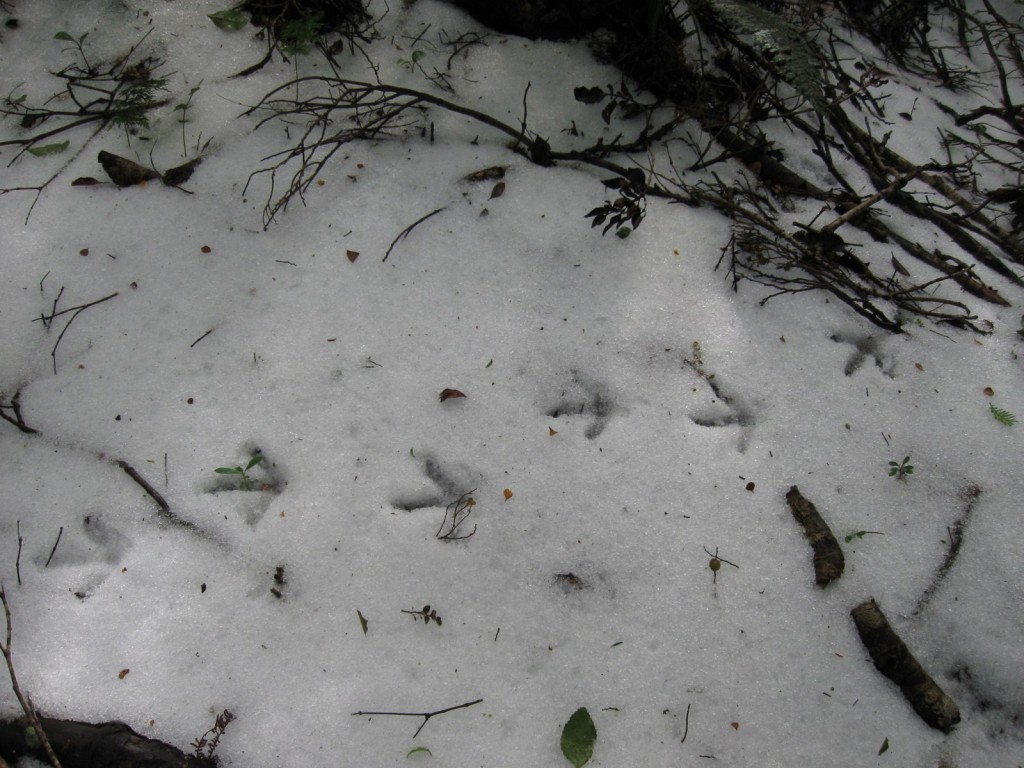 We stopped to have snacks at the next junction and the lack of chocolate may have had something to do with the previous snowball attack. We kept walking in the shin deep snow with the occasional breath-taking views of Wainuiomata and Turere valley with snow-capped mountains behind. We stopped for lunch at the start of the ridge that took us down to the river. Once everyone was ready we trooped on and it was pretty much downhill from that point. 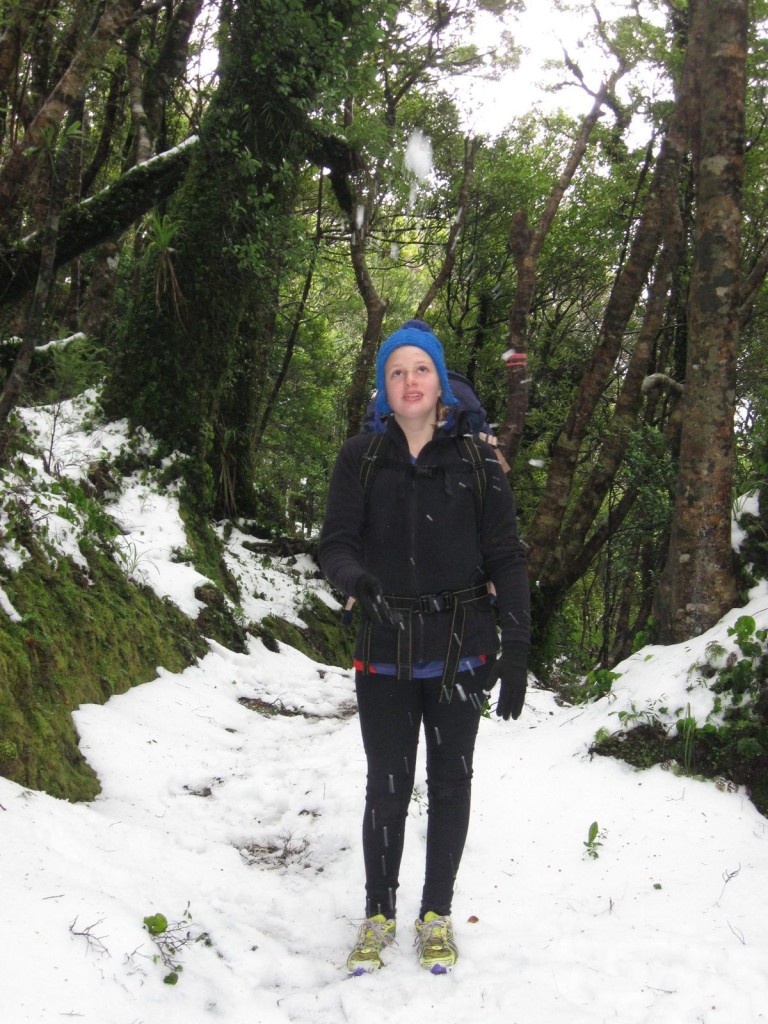 The parents were concerned that the river wasn’t crossable. A plan was hatched to spend the night on the floor of Turere Lodge. However my Dad found an okay spot to cross the river. We had a refresher from the junior bushcraft course on how to cross rivers as a group.  Then it was down into the water as we attempted our first crossing. It was very fast flowing and quite deep with the water coming well up my thighs. You could feel the power in the water as it pushed you downstream and you had to be really strong to resist it. With everybody helping we made it to the other side. 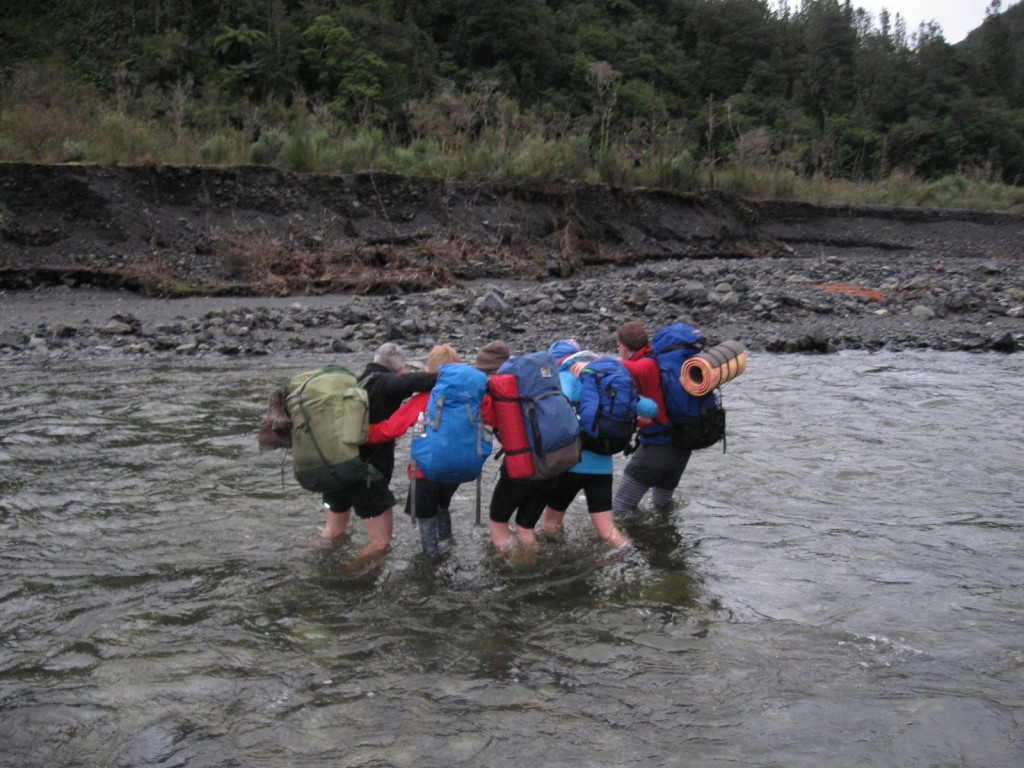 We headed upstream following the river, picking a route that meant we didn’t have to cross the river too many times. The second river crossing was by far the easiest one to cross. On the last crossing right before the hut, things went a little wrong when Dad tripped over an unseen boulder and fell forwards and pulling me with him. We both got soaked. Hamish’s Dad helped us stand up and we were able to finish crossing the river. 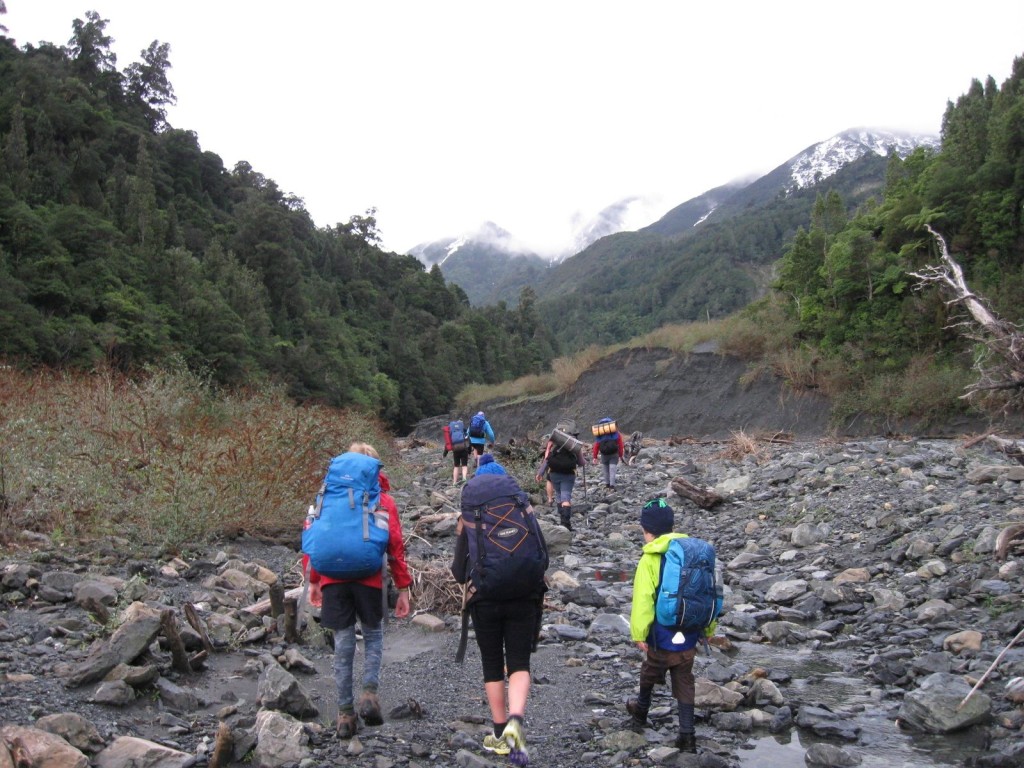 Finally we were at the hut. We got a fire and dinner on the go. We had a yum dinner of a tomato sauce and pasta topped with cheese and bacon. Pudding of marshmallows, a couple of card games and then it was bed time. The kids stayed up a little longer talking and hanging out on the top bunk before going to bed. 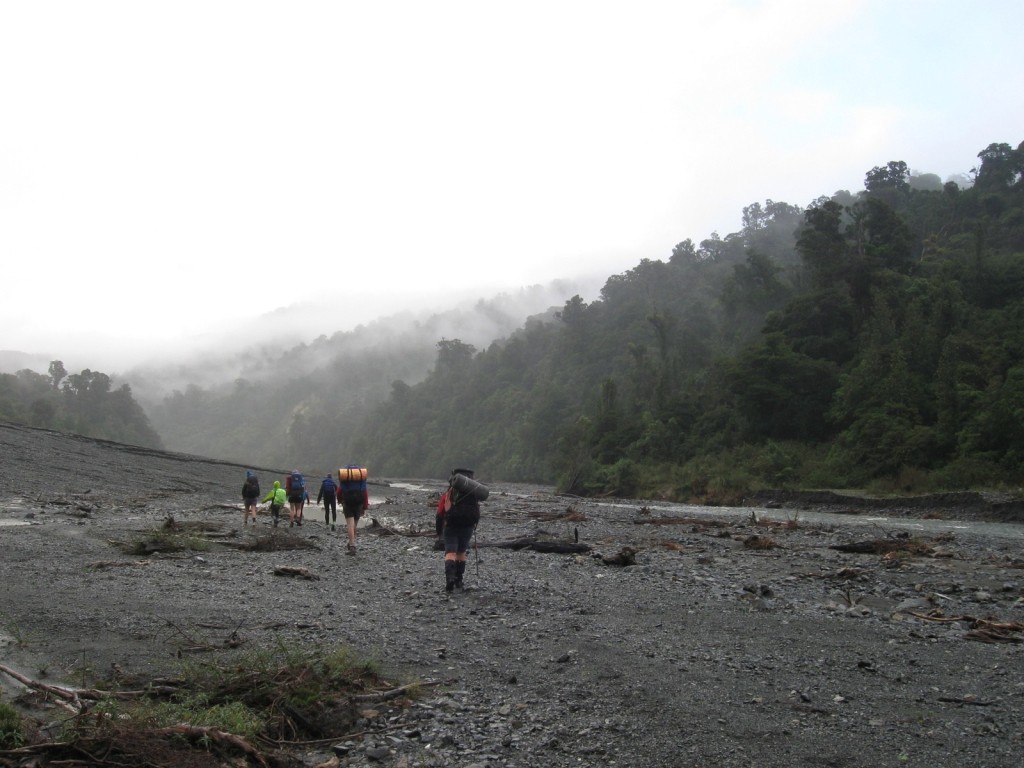 Sunday we woke to mist around the hills and unfortunately it was time to head back home. We had a warm brekkie of porridge and brown sugar followed by putting on cold soggy shoes. Luckily we had only three river crossings that morning as we scrambled along the base of a steep loose gravel bank and over tree trunks to avoid a couple of crossings from yesterday. 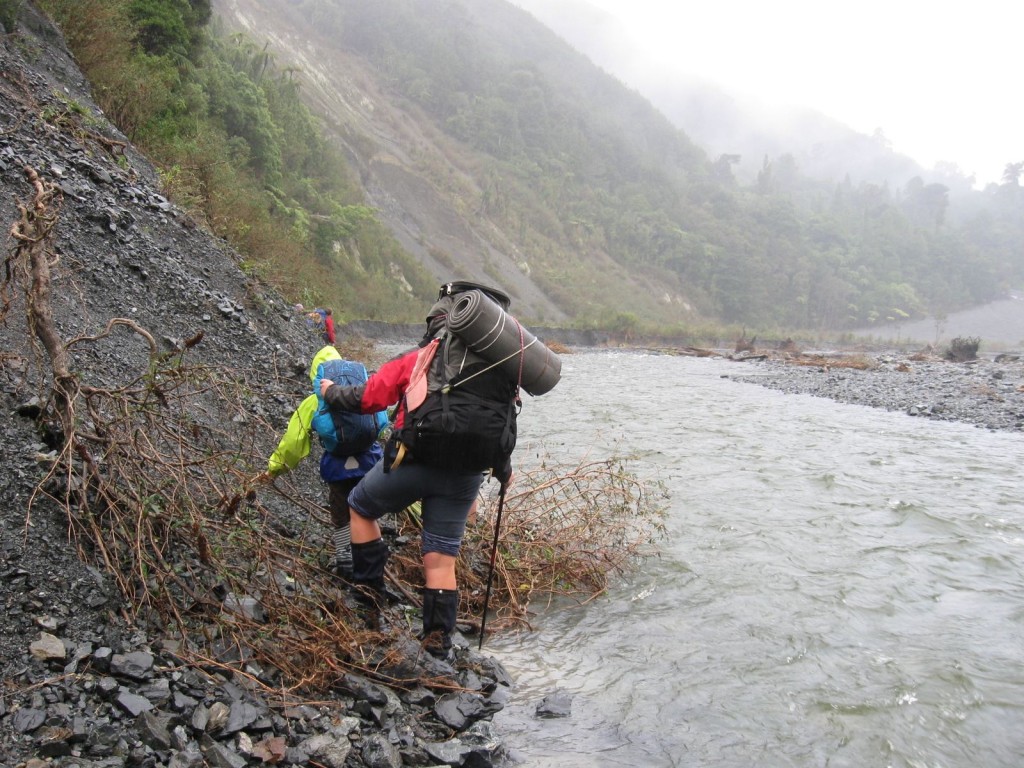 We started the climb back over the Whakanui track and us kids powered on ahead of the parents. As we climbed higher it was disappointing so see that so much of the snow had been washed away in the rain. The walk back seemed shorter than yesterday and in no time we were back at the cars. It was a great weekend away tramping and I’m still buzzing about the kiwi footprints. 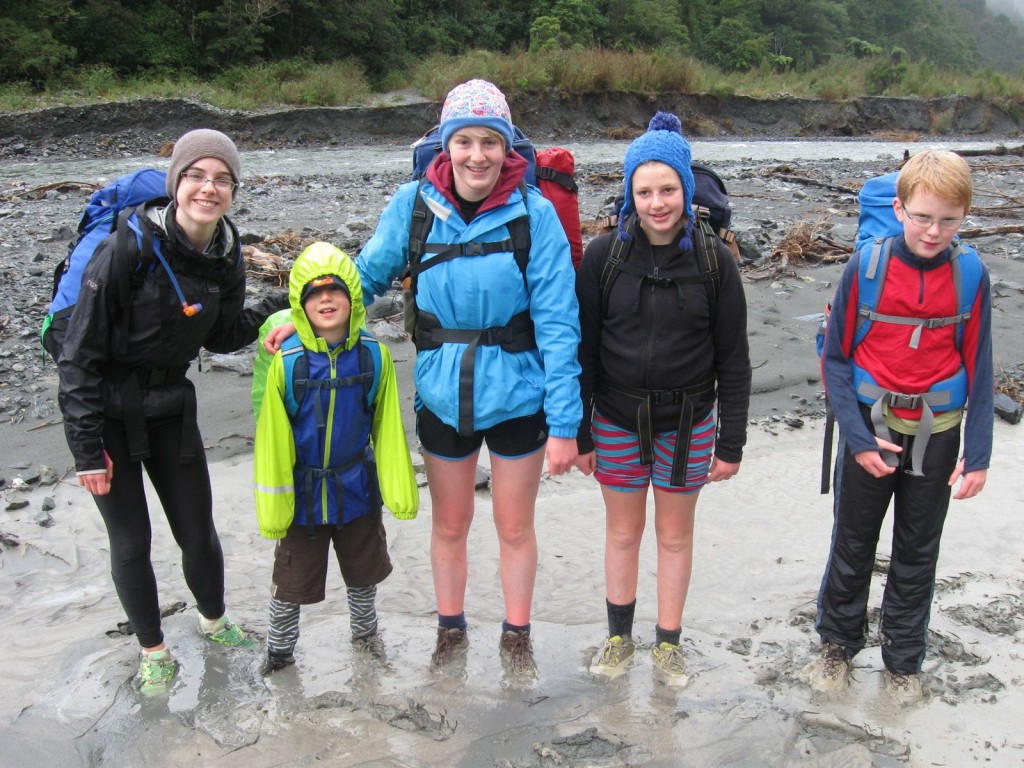 Hamish said the river crossings were exciting and woke him up. Papatahi hut, like all DoC huts, has uncomfortable mattresses. While a heat pump would be nice, the fire was ok once it warmed the hut up. Candles give poor lighting. Hamish advises new trampers to bring lots of candy, and to know some good card games.