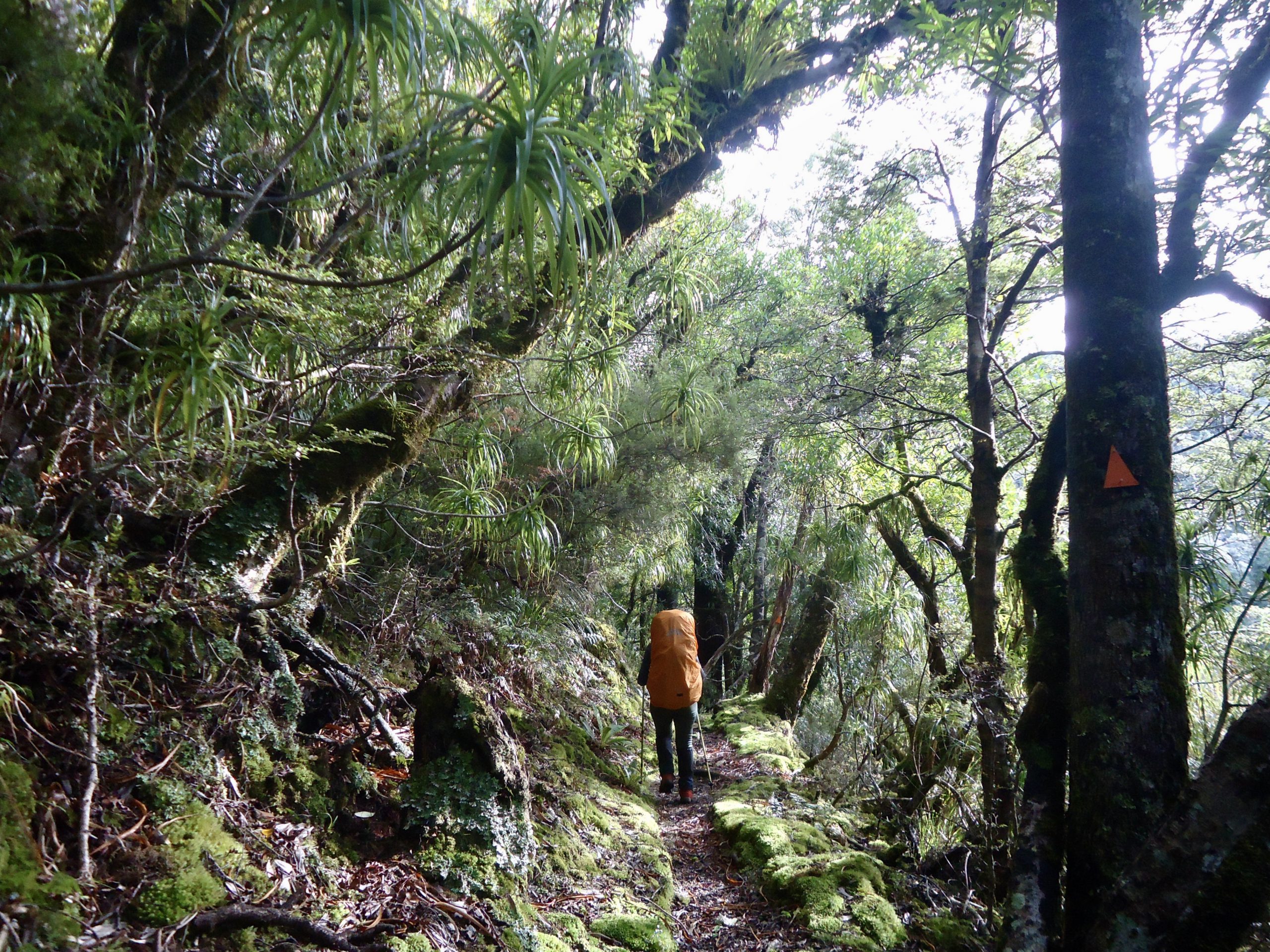 We were all really looking forward to this trip! – it had originally been on the trip schedule for Waitangi Day weekend, but could not go ahead as the local iwi had closed down the area for a time.

We left at 3pm on Thursday afternoon from Wellington train station. There were 11 of us in the club van – sharing with the group who were going up to Te Urewera to do the Manuoha-Sandy Bay Circuit (med) trip. Having the trip on this particular weekend was sure going to be a special and memorable way to remember NZ’s first ever Matariki public holiday!

We drove the 308km approx (3h 50 mins) via Dannevirke and Ashhurst up to Hastings. It was eerie driving over the hill just past Ashhurst, through the wind farm at dusk with the wind turbines whirring around us. We stopped at Hastings for dinner – most of us having Burger Fuel. It was then a further 25km drive to our accommodation for the night at the Napier Beach top 10 holiday park. We stayed in cabins there – a real treat to have a fully functioning bathroom and bed linen/ duvets before heading into the bush for the next 2 nights!

We were up early the next morning for the 2 1/2 hour drive to Te Urewera – making a brief detour to Oshers Bakery in Wairoa. We highly recommend this bakery! – great coffee and a wide variety of fresh and delicious bakery food right beside the Wairoa River.

When we arrived at Lake Waikaremoana we dropped the Manuoha group off at the start of their track beside the Waitokupuna River bridge – this involved driving about half way round the Lake. The views of the Lake and Panekire Bluff on the way were amazing and the sedimented rock in the area is stunning. The plan was for the medium group to meet us at Sandy Bay hut the next night and then we’d all walk back to the van together.

After farewelling the medium group, we drove to the start of our walk – at the Aniwaniwa Falls car park (which is about 200m from the DOC visitor centre, on the road to Rotorua). The first stretch was a one hour (300m elevation) walk through beech forest, on a wide, well-formed track to Lake Waikareiti Shelter. The Shelter is right beside the Lake, has a viewing platform and there are nearby toilets. We saw several dinghies parked up on the lakeside – you can hire them from the DOC visitor centre and row across the lake. There are 6 islands located in Lake Waikareiti – all a long distance away from the lakeside shelter. We stopped for lunch at the shelter and then proceeded to walk a further 3 hours around the Lake to get to Sandy Bay Hut (at the northern end of the Lake).

The track from the shelter to Sandy Bay Hut was much narrower (although well marked) and most of the walk was in the forest, away from the lakeside. The views were spectacular when the track did veer to the Lakeside – so still and peaceful. We could tell whenever we were approaching the lakeside because dracophyllum trees would start appearing in the forest.

Lake Waikareiti is large, and there is sand on the shoreline around the lake – which was very strange considering we were nowhere near the sea. The bush was so pretty – very lush and I have never seen so many pepper/ horopito plants scattered around a forest before! Another observation was we barely heard any birdsong while walking through the forest during our 2 days there – and I dont’ recall seeing any traps either.

It’s believed Lake Waikareiti was formed about 25,000 years ago when gravity pushed a massive sheet of earth and rock down its slippery mudstone base – the lake formed in one of the resulting hollows. It’s also considered one of the most pristine lakes in NZ.

We arrived at Sandy Bay hut after dark – I’m still fairly new to overnight tramping and learned that one must keep their head torch easily accessible for this situation otherwise it’s impossible to see the terrain or where you’re going.

Sandy Bay hut sleeps 18 people and you need to book ahead. It was very full on when we arrived on the Friday night (the Matariki public holiday). There were families with kids and a group of hunters with their dog. The hut is essentially made up of 3 rooms – the cooking/dining area in the middle (which had 2 sinks with running water) and then a room on either side with bunks. Maj-Britt celebrated our arrival by taking a (mid-winter!) run and plunge into the Lake! I could hear her squeals as she hit the water from further round the Lake!

Blair did a great job organising our trip and planning our meals! On Friday night we had a divine Macaroni and Cheese and on Saturday a Spiced Tomato Chickpea Halloumi dish.

On the Saturday most of us walked to nearby Kaipo Lagoon – a 10km return walk from the hut. Valentina decided to stay at the hut to watch some movies she had downloaded. It drizzled the whole day on Saturday, but we were walking in the forest the whole way. When we arrived at the Lagoon there were only about 2 spots where you could get to the water’s edge and there really wasn’t a lot to see at our destination. I am not an expert on landforms! – but to me it appeared to be a small lake, and I am not sure how it got named a lagoon.

Soon after we got back to the hut from the Lagoon the medium group arrived. It was great to catch up with them and to hear about their adventures – we were surprised to see their photos which showed they had travelled through snow on parts of their tramp.

The next morning we left the hut at approx. 8am to walk the 4 hours back the same way we came to the van. It was then a long drive back to Wellington all in one go (approx 6.5 hours and 493km). We had dinner in Palmerston North and arrived in Wellington around 9pm.