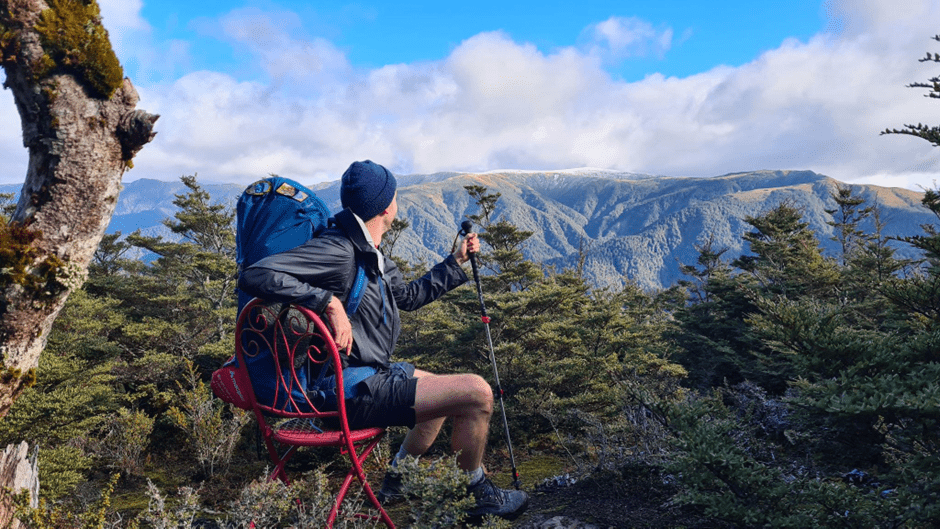 Our trip planning got off to a shaky start when James Wratt, the original trip leader, needed to isolate as a Covid close contact. Finding out I would lead an overnight trip for the first time, two days before the trip was due to start, was a bit of a shock. However James had done a great job planning the logistics in advance, which made the job much easier.

We met, as usual, at the train station after work on Friday. The Easy Medium trip led by Meredith were also packing into the van. It wasn’t long before we departed north for the Manawatū.

After ample servings at The Black Stump Cafe in Dannevirke, we pulled into ANZAC Park for the night. Abigail macgyvered a bivvy over a picnic table; Michael found a comfy spot on a tabletop. The morning discussion in the campsite was focused on strange goings on in the night. Could it have a pig? And what about the ominous red vehicle lights appearing in the carpark in the middle of the night?

A brief coffee and scone stop in Norsewood before we began the final drive to the Mangleton Road end. We hurdled a farm gate and headed into the bush towards Sentry Box Hut, only 10 minutes in from the start of the track. The classic safety orange hut was an uplifting sign, before we began a 700m uphill slog.

The footing was at times treacherous and our steps small as we slowly but surely climbed towards Rocky Knoll, the halfway point to the top. A light swirl of snow was whipped around us as we traversed from the bush to beech forest. The odd stop allowed us glimpses back to the Wakarara Range and the Hawkes Bay beyond. We could still glimpse the club van, which shrank to a small white speck.

Two hours of constantly climbing later, we reached the ridge top, and came across a viewpoint with the perfect seat. A red garden chair with views across the Western Ruahine Ranges.

We continued on, buoyed by the odd find and the picturesque snowdrifts. By midday we had reached Parks Peak Hut, where the Easy Medium group would be staying. A great spot for lunch in the sunshine, I was able to test out my new luxury for the trip, a Wacaco espresso maker. While it takes more time than a regular instant coffee, an espresso shot on a tramp is worth the wait.

What goes up must come down as we found out, on our descent to the Makaroro River and our hut. Alistair showed his prowess, moving like a mountain goat down the steep twisting trails. The rest of us struggled to keep up, and were all probably wishing for it to be done with.

We knew the Makaroro River separated us from our shelter, and there had been some consternation about whether it would be safe to cross or not. When the three of us reached the river, we were relieved to see a low river and Alistair standing on the other side. We made the decision to cross barefoot, and keep our boots dry.

It was mid afternoon, just after three when we stepped inside the Upper Makaroro Hut. Another safety orange beauty, the four bunk set arrangement was tidy and well kept. Without time to even put the kettle on, Alistair was keen to climb Totara Spur to the tops above the treeline. Michael decided to stay put, while the rest of us prepared for another climb. Without a head torch, Abi made the call to turn back while it was still light, while Alistair and I continued on.

As the tree line thinned and faded, metal stakes replaced orange triangles. Stepping through the tussock, the wind cut through us as we briskly explored the tops. The fading light and setting sun gave it a surreal quality. Alistair did a great job at capturing the moment.

With the light quickly disappearing and a desire to get out of the wind, we headed back down with head torches to guide the way. Once again Alistair was sure underfoot while I stepped slowly in the darkness.

We arrived back at the hut to find dinner well underway, chefs Michael and Abi having made a good start on the Moroccan couscous. With the fire going, it eventually made for a hearty meal by candlelight.

We rose early on Sunday, and departed shortly after 8, knowing we had agreed to meet Meredith’s group at the van by 1pm. Overnight the bush had been dusted with snow, and ice had encrusted some of the surrounding grasses. Another river crossing beckoned, all but Alistair barefoot again, before the grinding climb began.

Much like the climb on Saturday morning, there was not much more to it than putting one foot in front of the other, and imagining the comfy seats of the van. There were moments of false hope, where it seemed like the slope was levelling off, only for another steep section to appear.

Half way back up to Parks Peak we met a father and daughter who had stayed at the hut the previous night. The young girl seemed to almost skip down the treacherous track without worry. They were going all the way up to Totara Spur and back to Parks Peak – in a single day.

Our relief was palpable as the track finally flattened off and we came to the sign for Parks Peak. The walk along the tops also featured views of snowy Ngauruhoe and the magnificent Ruapehu maunga.

Parks Peak provided a last stop for a refuel before we reached yesterday’s tough ascent, now our daunting descent. We now had ice to content with. My knees were feeling the strain, and 10 minutes in, I rolled an ankle. There was a horrible moment when I wondered whether this would mean I had to turn back to Parks Peak, and wait for rescue. But sheer doggedness drove me on, and step by step, I gingerly made my way nearly 700 metres down the mountain. The rest of the group were very patient and made sure I was okay. Meredith texted messages of support from the van as I gave her updates on my progress. Somehow, despite my hobbled steps slowing us down, we made it back to Sentry Box Hut just after 1pm. Meredith and the EM group had biscuits and hot drinks waiting for us, before we made our way home South on the long drive home.