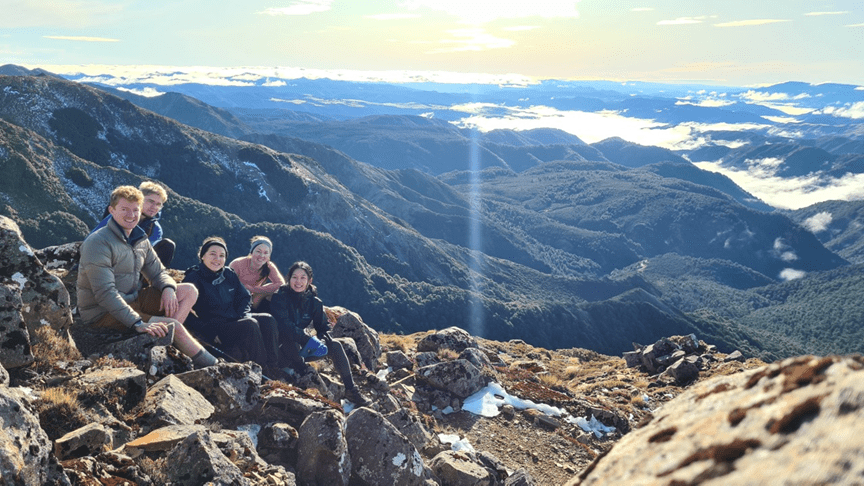 Our delightful bunch of 8 bubbly people departed from Platform 9 on Thursday night and made our way to the Makahu road end carpark. A stop was made to scoff burgers in Sanson. All this seemed promising until our headlights beamed on 4 other cars at the road end and realised we’ll have to set up tents in midnight temperatures of well less than zero. Alas, the circumstances made climbing into my sleeping bags even more rewarding (yes, plural as I had been extra prepared with the intention of surviving camping in late June). Irina opted to sleep in the van, which in hindsight was a very wise and sane decision.

Friday morning, we climbed out of our tents to see sunshine and a picturesque dusting of snow on the hills, just as Monique our trip leader said she had ordered for us. According to the weather forecast however, the sky was due to cloud over later so we decided to sidle to Middle Hill hut first, saving the tops for Sunday instead which was supposedly the best day.

Off we went, first bagging Makahu Saddle hut which is a convenient 300ms from the carpark then encountering the quaint Kaweka Flats bivvy a few hours later. The bivvy was a standard dog box on a grassy knoll where we gladly stopped for a snack, chatted to a father and son hunter duo and patted their delightful dog. The day got better still for the three avid hug-baggers on the trip (me, Monique and Alistair) when we visited the historic Iron Whare. The one hour side trip was well worth it with some interesting history inside the Whare as well as expansive views over the east towards Hawkes Bay- we bagged the mesmerising view of mountain ranges layered with clouds and glittering coastline too. After all, a hut is most beautiful when taken into context the nature and beauty that surrounds it. Finally, around 4:30pm we arrive at Middle Hill hut to find a gregarious young man Jeffery and 5 gloriously empty bunks.

We set about making dinner while chatting to our new friend, who failed to summit the tops that day as it had been too icy. We passed others that day reporting the same ordeal which further confirmed our decision to reverse our plans was right. A most well executed dinner of nachos was served up, which we gobbled up while reflecting on our favourite huts. We were snug in our sleeping bags by trampers midnight, which is to say around 9pm, full with delicious food, new memories and a satisfaction only a days tramping with good company can provide.

The next day we woke up to a slight drizzle outside and the curious story of “flying fish pie”- Ashleigh was on a sleeping mat next to Jeffery’s bunk overnight and in his sleep he nudged his midnight snack of rehydrated Backcountry cuisine onto her. Good thing it was gluggy as glue and didn’t spill all over her sleeping bag! We took our time with breakfast and beverages, as the plan to go over the tops has been swapped out for heading back to the carpark given all the ice. Our plan was now to stay at Makahu Saddle hut Saturday night and figure out alternative shenanigans for Sunday. Saturday we travelled much faster and was back at the hut near the road end by 3pm, we were over the moon to find an empty hut.

The pesto pasta for dinner was exquisite, which we enjoyed by the roaring open fire before turning the night in.

On Sunday we started with clear skies and the sight of two planets next to the moon- the stars aligned metaphorically and literally for our trip this inaugural Matariki Weekend. The team split into two groups, me, Ashleigh, Alistair, Abigail and Jack headed up to Dominie hut while Tony, Monique and Irina headed to Black Birch bivvy.

We climbed an hour an a half up to Dominie hut, which was really more like a 2 man bivvy.

Sitting at close to 1450m, we got great views out to the east coastline.

Sheets of clouds sandwiched the ranges between us and the sea, while looking back towards the ranges heavy clouds were just coming over the tops.

We couldn’t really have hoped for a better itinerary- lush bush, adorable huts, high altitude views and great company. By lunchtime, we were well on our 7 hour drive back to Wellington and after a burger stop in Flaxmere everyone was content, occasionally breaking the silence to talk about which next WTMC trips to go on.