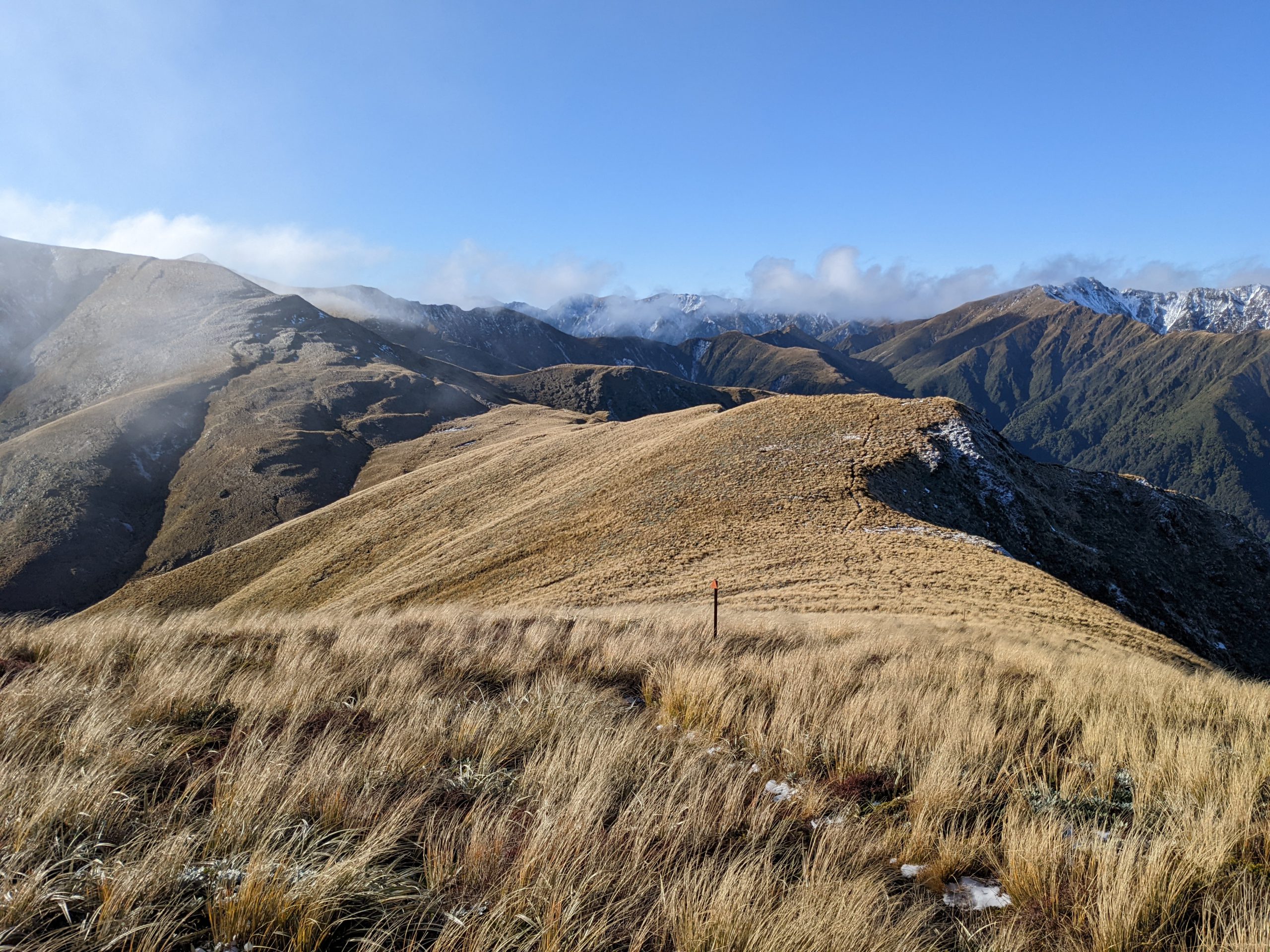 We started walking about 8.30pm, easily finding the path in the dark aside from one accidental diversion (missing the hairpin turn in the track). At 10pm we arrived at Rangiwahia hut to our dream scenario of many spare bunks and a blazing fire. (Note: DoC’s new booking system is finally open and you now need to book the hut all year round).

Tracey very tactfully gave the couple inside a few minutes to sort themselves out while we slowly took our boots off outside. With a miserable forecast on the Sunday, we all agreed to a day instead of overnight trip to Triangle hut.

Saturday morning we left just on sunrise at 7.45am. The track long the tops was less icy than expected although there we had to plough through frozen tussocks for the first few hours.

We arrived at the junction of Deadmans Track and Triangle Spur after 1hr 10mins (estimated DoC time of 1hour) including a few photo and de-layering stops. As the mist cleared, more sun came out and the views just kept on getting better. We lucked in magic! Ruahine conditions – sunny, clear skies with no wind.

Along the spur we hit some patches of snow but less than we were expecting and with bruised egos and bums our main risk if we slipped.

We’d been warned that it could be hard to find the track from the spur to the bushline but the great visibility and team work helped with spotting poles. They were somewhat lacking further down as we followed a rock rut for a few hundred metres.

In the bushline, there was no shortage of orange triangles (leading us to their namesake hut). We made it to the river just before 10.45am spotting the hut on the other side. Although the river seemed shallow but on a closer look with more depth in the middle so we crossed at the two upstream branches, dry feet now nothing more than a dream.

Triangles everywhere except where you need them most. Photo credits: Tracey (top and bottom left); Maj-Britt (bottom right)

At the hut we enjoyed a warm cuppa, patches of sun and an early lunch. with 11.30am coming around before we knew it.

Crossing the river again, with wet feet but happy stomachs, we easily found the track sign we had missed coming down. Braced for the big uphill slog, we made the most of knowing we had good time for our return, stopping to take photos as the views emerged at the edge of the bushline.

Back at the spur, we stopped even more – with lots of wows as the mountain views just kept getting more beautiful. Some snow-capped, others shades of tan, brown and blue. We also snapped a few shots of the few patches of snow, and the still frozen tarn.

Not long before 2.30 pm we saw the poles where we had turned off that morning.  At the junction we decided to return to the hut rather than detour via the highest point and back. A good call as the winds and mist started coming in on our return.

Most of the return was now downhill. We picked our way around and over the streams of tracks, with most our morning’s ice on the tussocks now small pools and puddles. At about 3.30pm we arrived to a now full hut.

The hut had a friendly atmosphere with a mix of newbies groups and experienced trampers across a group of students, a few families, solo trampers and us, chatted, and some played games and mulled wine.

The last was in bed not long after 8.30am as the well stoked fire roared.

Another hot night – with the creaks above creating portents of collapsing bunks (not as exciting as it sounds if you’re on the bottom).

The hut came to life around sunrise. The forecast lived up to its promise of ongoing drizzle all morning and no views.

We left about 8.10am going at a steady but not sprinting pace, and made it to the carpark at 9.20am – even with a few wet, slippery parts of the track.

Changed, and as refreshed as possible without a shower, we were on the road well before 10am. A coffee stop in Levin (Salt and Pepper Café) to break up the driving, home just in time to enjoy some of a sunny Wellington afternoon, three happy women after stunning views and bagging another hut.