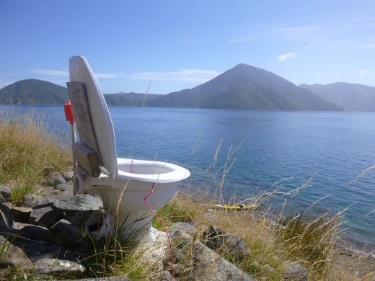 Our noble band of aquatically-inclined adventurers set foot on South Island soil well into the night. It was the kind of portentous start to our paddle-bashing adventure we all craved; for though we were tired, the dark, silhouetted Sounds held a spooky mystery and untold secrets that were ours to explore over the next three days.

We wound our way tortuously to Anakiwa, where the surprisingly welcome concrete floor of Sea Kayak Adventures awaited.

The next day we were up bright and early and with bags packed, we shot off to Tennyson Inlet. The map only added to the sense of adventure awaiting us: Tennyson Inlet looked like one nook in a whole trove of twisted crannies.

Sea Kayak Adventures’ main man, Aaron Price, led us through our safety briefing with charm and charisma – it was clear to us all that he had a natural love for both his job and the hidden treasures of the Sounds. It was then over to our esteemed group leader Gareth (and his kayak ‘Alison’) to lead the charge [Editors note: I have inside information that the kayak is actually called ‘Alice’ out of deep love and devotion to a certain someone who has that middle name, not that the editor has any personal connection to this matter of course].

We were paired up, and off into the ocean we slipped. Perhaps one of the strangest aspects of double-kayaking is that no matter how hard you paddle and in what direction, even in the deepest body of water miles from land, you’ll never be more than a metre or so away from someone… Something’s definitely gone wrong if you are. But that only adds to the adventure – someone to share in the fun, share in the sights and sounds… And of course, blame entirely when the kayak veers outrageously off-course.

We spent the morning gliding through the inlet, and after a beautiful, sunny lunch stop at Tarakaipa island and heavy winds to Elaine Bay, we made for our stop for the night: Waiona Bay. It was a long day, but we’d seen Stingrays and brightly coloured fish, hidden inlets, golden sands, and a whole host of marine birdlife including terns, shags, petrels and shearwaters.

Kevin and Richard proved themselves able hunter-gatherers, pilfering a sizeable plunder of mussels from the floating farms we passed en route. That night, Kevin cooked up quite the treat, and our noble band learned we had quite the Jamie Oliver amongst our ranks. Sadly for him, Kevin’s now lined himself up as the resident chief for future trips! Or maybe it was sadder for the rest us… Having been relegated to washing-up duty.

The forecast for the Monday was looking ropey, and Gareth chose to sell to the group the prospect of a big day the next day, so we were closer to home on the final day. We all agreed, and after good food and sleep, we were up early again to hit the waves.

We shot past Maud Island and down Pelorus Sounds, which included the discovery of a ‘loo with a view’ at Tawero Point, and several blue penguins playing in the water.

We lunched at Jacob’s Bay, and with bellies full of food and aching arms, our wiley leaders cunningly deployed the group flies in deviously engineered fashion so that we could all sail down the Sound with the wind.

Once more we took up the paddles and wound into Kenepuru Sound. The afternoon was hot and all day the sun had beaten down; it was only right that everyone in the whole band used our next snack stop to dive into the refreshing sea.

We made our final run to our camp stop just south of St Omer Bay. We had a stunning view over the Sounds, and a treacherous scramble threatening very wet trousers for anyone wanting to use the loo.

The next day we were surprised and heartened to learn that the severe winds had not materialised. It was another beautiful day. We went to the Amokura ship wreck, lying on the beach all red with rust and gutted by the years, semi-sunken into the sand like a giant serpentine skeleton. We explored the bays and the inlets, came across seals, birds and more stingrays.

Finally, we made our crossing to Broughton Bay for our pick-up. It wasn’t easy work, and we fought through howling winds that flew through the Sounds and drove up thin, swirling whirlwinds that nipped at our boats and cast us from our course. We pushed through, and arrived just as it started to rain. It couldn’t have been timed better.

We caught a quick shower back at the base, thanked Aaron for a great trip, and raced off to Picton, having just enough time for some of the party to run into town for fish n’ chips for the ferry home.

We got back to a very wet and windy Wellington, touching down on a new island in darkness, just as we’d done a few days before. Sadly, this darkness was wasn’t charged with the excitement and mystery we had experienced when we landed on the South Island, but it was befitting for a different reason: it was the sad end to a glorious trip.