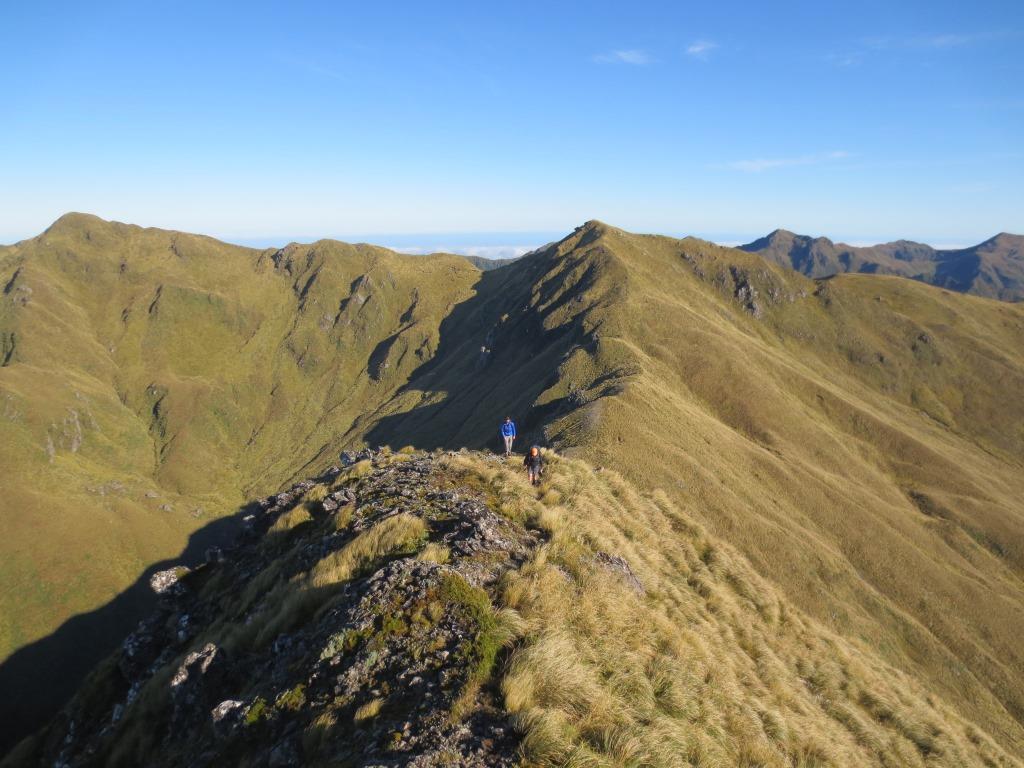 The walk started off at sunset at the Kiriwhakapapa Road campground in the Central Tararua ranges.

We arrived after stopping at the usual kebab shop in Carterton, which I believe the club must be getting kick-backs from judging by the amount of business we send their way.

Light quickly deserted us as we entered the forest and we resorted to head torches to guide us. The local wildlife took advantage of this and we soon spotted numerous creepy crawlies on the dirt path. None of us were entomologists but we were fairly certain that we identified spider, centipedes, and various other things designed to give you the willies.

After a two hour climb we reached the appropriately named Blue Range Hut and were greeted by a stunning night vista of an infinite devoid of light pollution. I for one was humbled by the vastness of space and felt a twinge of disappointment that such a beautiful view is invisible for most of civilisation.

We settled in quickly with help for two small solar-powered lights in the hut and were soon asleep in a remarkably warm, comfortable setting.

Dawn promptly woke us and we were all in good spirits after a solid night’s sleep. The view across the valley was fantastic and made all the more impressive by the pink sky which also served as a warning of the day’s weather.

Breakfast was consumed on the picnic table outside the hut before the two groups split – the easy-medium trip aiming for Cow Creek Hut and the medium-fit for Tarn Ridge.

We re-walked part of the track from yesterday and followed the track up, round, then down towards Cow Creek Hut. I soon learned that a theme of this trip was going to be repeated ascent and descent. We’d walked from the road end (300m elevation) up to the first hut (980m), down to Cow Creek (500m) and were planning to go back up to table ridge (1460m) before climbing up and over Girdlestone (1546m) and back down to Tarn Ridge Hut (1350m).

The track took us over and alongside several streams leading into Cow Creek and I for one took advantage of the crystal clear water to quench my unflagging thirst. The water was pristine when compared with whatever it is that comes out of the taps in Wellington.

After some serious climbing approaching a ratio of what must have been close to 1:2 we stopped just before the end of the tree-line for a well-earned lunch break. One of the most experienced, well prepared, and capable members of our trip who shall remain anonymous had left his food bag on the table that morning and it was still there. This was only discovered once we’d stopped for lunch and sparked a degree of concern and a brief bout of expletives. Luckily snacks had remained in the pack, so there was ample energy to get this particular tramper to tonight’s accommodation.

After lunch the weather closed in and we were blown and buffeted up, onto, and along Table Ridge. Table ridge is supposedly called so for being as flat as a table, but the cloud must have obscured this from view because it certainly didn’t feel like we were walking on a table. 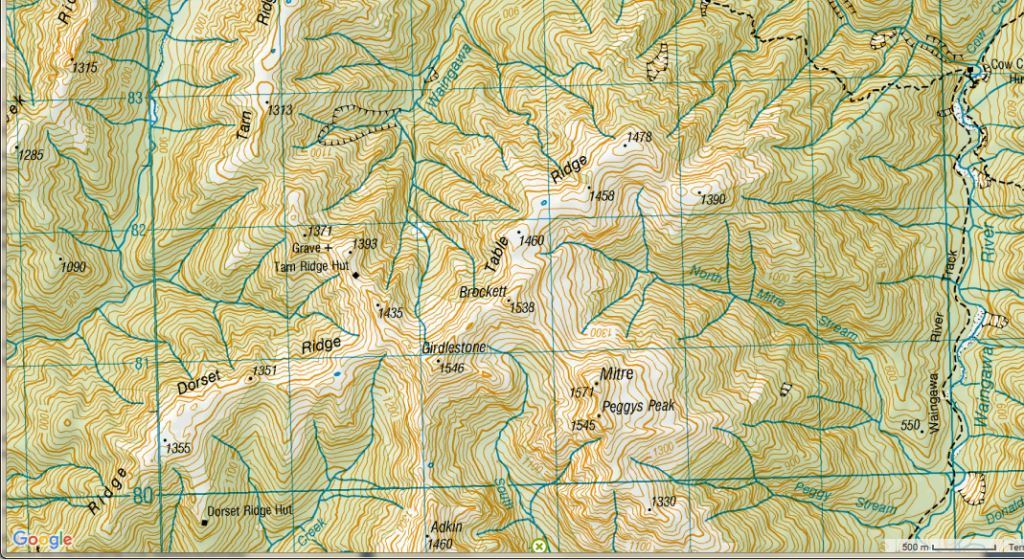 Visibility was worsening by the minute and we slogged on over seemingly endless hills towards the rest and comfort of the Hut.

Finally, after battling our way through what I like to call ‘stabby grass’ along the ridge, we descended for one final time to the barely visible through the clouds Tarn Ridge Hut. The stabby grass took out most of its vengeance on Paul in the form of cuts to his hand and leg, and decided to show mercy to the rest of us.

We arrived at the Hut at 3:30 after 7 ½ hours solid walking. This was definitely a medium-fit rated trip but not anything more than what I was expecting. We weren’t alone in the Hut as three hunters had been helicopter in with about three months worth of bread, meat, and beer. Fruit and vegetables were nowhere to be seen.

Another WTMC club member had also decided to visit Tarn Ridge Hut this weekend and we discovered from the hunters that he’d recently decided to go out for a walk in the reduced visibility. Kevin showed his caring side and decided to venture out after him to make sure he found his way back safely and just as he was about to head out into the cold and wind, Simon promptly turned up back from Dorset Ridge Hut as he’d intended.

The now four of us chatted to the hunters for a while and warmed ourselves up with hot drinks. The person who’d left their consumables at the previous hut was generously included in this and lent the necessary materials, including a cup! We decided on an early dinner as this had been a tough day and we hadn’t made many stops for snacks. Kevin and I got chopping and Paul got cooking a lentil and vegetable curry (with added salami).

A hearty and delicious dinner was promptly finished and greatly appreciated before we spent the rest of the night conversing with the hunters and reading the Hutt Valley Tramping Club’s 1979 Annual! We sat with the hunters for their meal of meat, bread, and a side of meat before retiring to sleep on some majorly mouldy mattresses.

The hunters set off early in search of game and were rattling around at some un-Godly hour of the morning. The trampers woke at the much more gentlemanly hour of 7:00 and were greeted by stunning views over the Tararuas. Another pinky-red sky illuminated the bed of clouds down in the valley and beautifully contrasted the black mountain ridges spread out before us. Cameras and cell phones were out to capture the splendour and breakfast was consumed on the balcony whilst appreciating the beauty of nature. 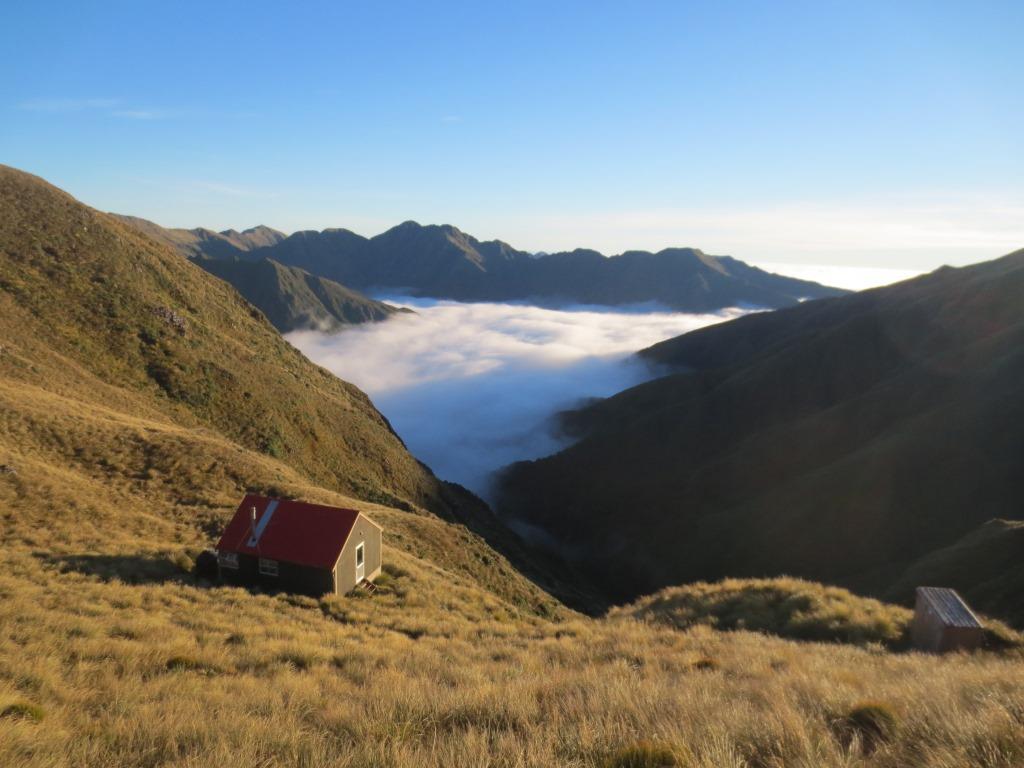 We were all packed and ready to go after triple-checking the hut for food left behind. The area was almost unrecognizable from yesterday as we’re treated to immaculate weather with Ruapehu, Ngaruhoe, and Mt Taranaki just visibile to the North.

Today has much of the same as yesterday in store and we’re forced to re-trace our steps over Girdlestone, Brockett, and numerous other small hills back along Table Ridge before making our way up to the highest point in the Tararuas – Mitre Peak.

The last part of the ascent is balls-to-the-wall stuff as the track is barely existent and we scramble up the rock face to the top. Most of the tracks out of the bush line have been sporadic and largely DIY but it’s almost impossible to become lost given that the ridge drops off 700m either side.

The soreness from yesterday quickly returns as we’re up and down again until we reach the top of Mitre Peak and stop to admire the view. It really is stunning and although it’s a lowly 1570m above sea level, the top of the world feeling is still there give the views out to the sprawling lowlands below.

The track winds down over Peggy’s peak and this is where is begin to struggle with the long slow descent taking its toll on the legs. Kevin and Paul quickly race on ahead while I take my time and grin and bear the strain on my quads. The track becomes much more pronounced once we re-enter the forest, as does the heat and the wildlife.

The descent is rapid and we arrive at Mitre Flats Hut around lunchtime. The person who left food in Blue Range Hut was lucky enough to be able to buy spare food from the hunters and are rewarded for their misfortune with a re-hydrated chilli con carne for lunch in the glorious sunshine. After a quick sunbathe in the grass its back on to the final leg of our journey – the Barra track to the Pines and Upper Waingawa Road.

Paul decides to take advantage of the gorgeous weather and cools down in the river while Kevin and I relax in the shade. This is a pristine place for chilling out and relaxing after nearly eighteen hours of walking this weekend. It’s a quick stroll down half an hour of dirt road before we meet the easy-mediums and recover the lost food they were kind enough to bring with them and strong enough to resist the temptation to consume and claim ignorance about.

The guilty party buys the rest of the van ice-creams to atone for his sins and we enjoy a pleasant drive back to the CBD, the home of light pollution and funny tasting water.