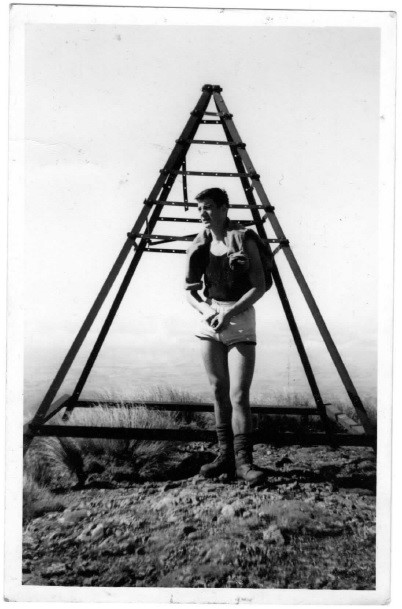 In May 1959 as a 14-year old teenage after an unsuccessful attempt to join the Tararua Tramping Club, I was invited by Norn Whiteside a fellow Wellington Technical College student to join him on what he described as “a Friday night stroll from Kaitoke to Walls Whare”.

I asked him where Walls Whare was and he said it was near Greytown. The rest of the working party building the Club’s new hut were driving over but as real mountaineers we would tramp in from Kaitoke. This was only my second trip in the Tararuas. My first was with the YMCA into the club’s Smiths Creek hut and out down the Tauhenikau gorge two years before.

We took the train to Upper Hutt and a taxi to the start of the Puffer Track into Smiths Creek. The track had been re-routed up the ridge two years before replacing the original track up the gully from the YMCA Camp (now Kiwi Ranch). Norm said the new track was too long and decided to take the old track. Unfortunately it was overgrown with gorse and we arrived at the top scratched and bleeding. Norm was in a big hurry but his klutz of a tramping companion had a faulty torch that gave up on the way down to the hut. We abandoned the overnight trip and stayed at the new Tauhenikau hut.

At seven in the morning Norm woke me up and announced we were leaving at eight. I got the firm impression that if I was not ready he would leave without me. After a breakfast of bacon sandwiches we left at eight sharp and arrived at the VUW Alloway Dickson hut at the bottom of Block 16 at 9:30. Just a short stop and we were off across the river. There were no bridges across the Wahine or Tauhenikau rivers in those days so we forded the river arriving at Cone hut about 11:00 AM. Half an hour for lunch and away we went up the new track too the ridge between Cone Saddle and Mt Reeves. All was well until we started down the track to Walls Whare that the Club had cut the weekend before. Unfortunately we lost the track halfway down and ended up in Coal Stream. It took two hours of bush bashing through supple jack and basted grass to reach the river.

“River’s down” Shouted Norm and away he went leaving me on the bank. I tried to follow, water up to my waist. By the time I reached the opposite bank I was stuffed. I found the track up the cliff to the hut and staggered up. At the hut I collapsed on the nearest bunk to the door and fell asleep. I awoke at 8:00 PM to find Norm joining in with the working party consuming beer from half gallon jars and relieving themselves in the hole that became the foundation for the giant fire place.

Just a stroll with the WT&MC, the first of many.