It was a rainy Saturday morning when a group of 6 porters and 6 punters met at Catchpool Valley for an overnight to Paua Hut. The plan was originally to have a few people tent outside, but given the forecast, we we decided to squeeze everyone in to the hut and leave the tents behind. 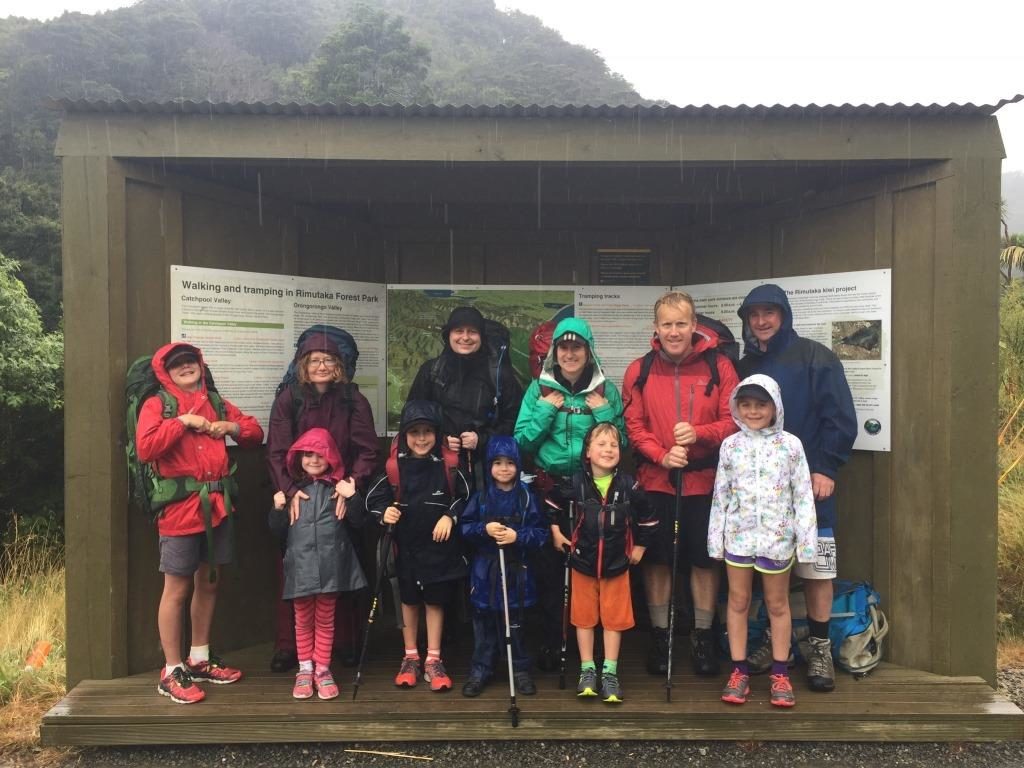 With the Met forecasting a break from the rain in the afternoon, we set off up the Orongorongo Track, with the kids heading off and taking turns to take the lead. With the forecast letting us down, we had lunch at Midway Bridge in the rain, and then carried on up to the river, taking a minor detour around a bridge under repair. 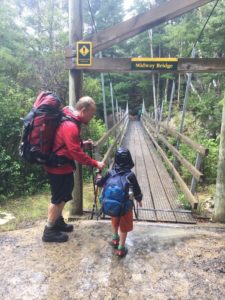 Arriving at the Orongorongo River, we were pleasantly surprised how low the river was, and the rain finally began to let up. A half dozen or so crossings later (I’ve been told it can be one in 3 – for real?!), we made it down to our home for the night, WTMC’s own Paua Hut. The kids quickly took over the upper bunks declaring it an “Adult Free Area”. Which was fine, because adults had dinner to prepare, a fire to start, and clothes to dry. The swing outside the hut got some good use too. 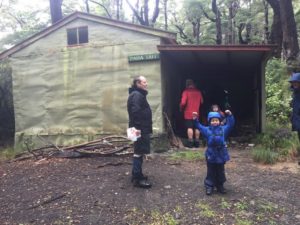 After Beef Staurganauff [sic] and Gone Bananas, not to mention numerous snacks, everyone was ready for bed. 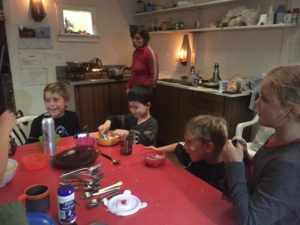 The next day, we were up before the sun, and left over chocolate sauce from the previous night made a great hot chocolate breakfast hot drink for adults and kids alike.

Rather than stay another night in the hut, we decided to head out on the 4 wheel drive track to the South Coast. Robert and Stuart volunteered to head out ahead to get cars, so that we need not walk the whole loop back to Catchpool. They first tried to cross to Browns Track, but the river was too much even for adults by this time, they wisely back tracked and headed up the 4 wheel drive track ahead of everyone else.

Over the next few hours, we made good progress along the track, crossing numerous streams of various depth and speed, and taking stops as needed. Despite the persistent rain, Rachel firmly owned the title of “Chief Morale Officer”, keeping the punters’ spirits up with songs and encouragement. We were also treated to some amazing vistas along the Orongorongo Valley, on a track that’s not frequently taken, and considerably longer than our planned route of Orongorongo Track.

Along this track, I also learned a pro-tip that the only answer to be given to the question “Are we nearly there yet?” is “mmm, not sure”. Then hide the GPS. Kids are smart.

Not far from the end of the track, Robert appeared – he and Stuart had arrived with cars at the end of the track, although Stuart’s car tire had sprung a leak but was still drivable. Robert made a couple of trips to get everyone to their cars, and we all made it out and made our ways back safely to Wellington, including Stuart with his car’s slow leak. 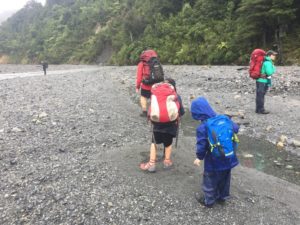 With the longer march out on Sunday, rain, and many stream crossings, it wasn’t the short easy trip everyone signed up for, but one everyone should be proud of, and one made even more memorable by a great group of porters and punters alike.