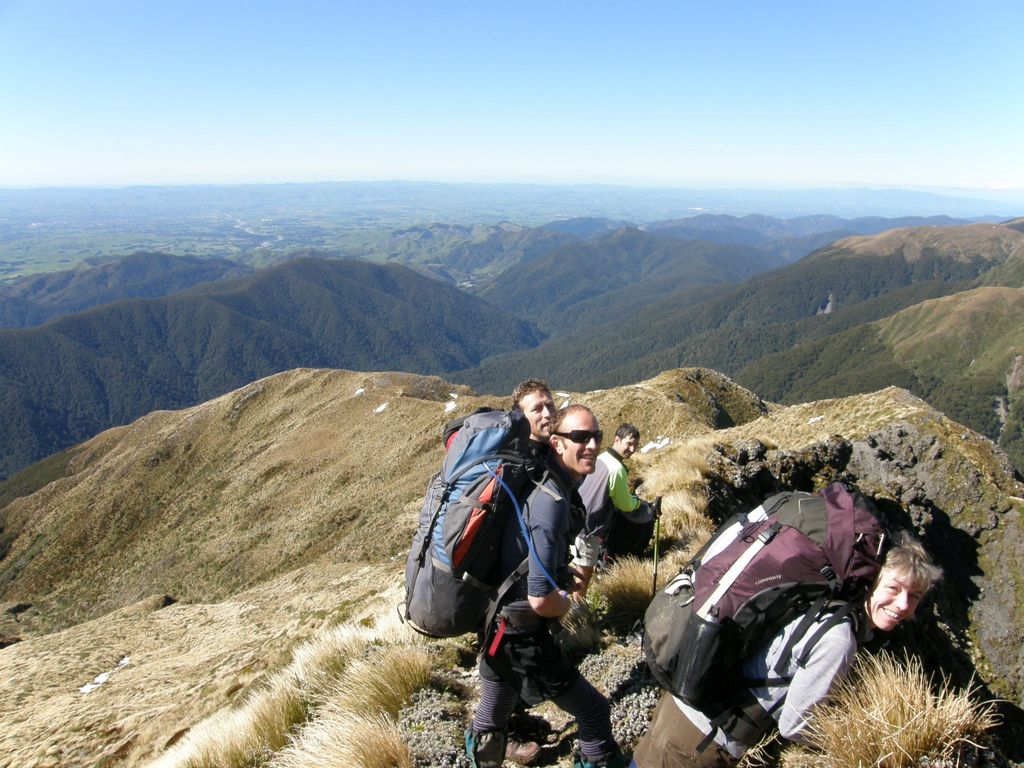 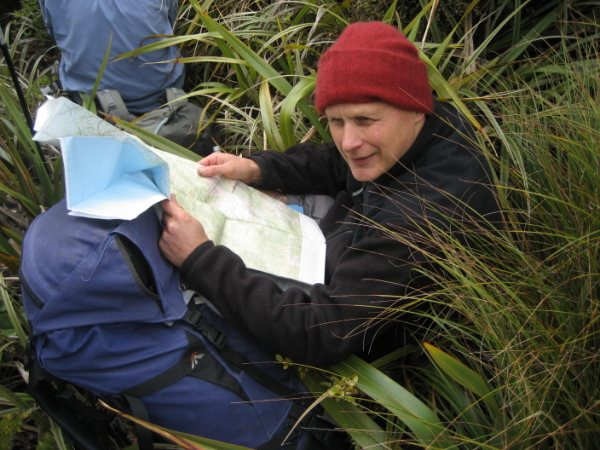 I volunteered to lead this medium trip after Michael Lightbourne pulled out due to unfamiliarity with the route. On the trip list were six club members, plus Vlad. Vlad had never tramped in New Zealand, although assured me he had hiked in the Ukraine. Best let him know what he’s in for, I thought. You will need to be fit. We will be walking over mountains. It will be muddy. There might be snow. You will need all this gear (referring him to the club gear list). None of this put Vlad off, and he looked young and fit. All the same, I took the precaution of trying to minimise his pack weight. He only had to bring a few veges for
dinner, while others were weighed down with tins of tomatoes, a kilogram of pasta and the like. Vlad got the first aid kit while others were burdened with the large fly, cooker, gas and billy etc.

When we met at the railway station I was relieved to see that Vlad was very well equipped, having spent over $1000 at the Kathmandu sale. We were using public transport, so we took the train to Levin and taxi to the Poads Road, from where it was an hour or so walk to our camp site by the South Ohau River. Seven of us crammed under a large huntech fly on a windless, rainless night.

The morning dawned fine and the river was surprisingly low. However, the current was swift, and some were unwilling to get their boots wet. We therefore embarked on the rather tedious and muddy slog up Gable End Ridge over Richards Knob, the drop down over Butcher Saddle, and the final series of climbs up to Te Matawai hut. This turned out to be the toughest day of the trip. Vlad struggled at the back, despite being decades younger than some in the group. “Crazy trampers,” he muttered, sounding like a character out of a Marina Lewycka novel. We stopped regularly, and Hans and Mika had lunch almost every stop. But they also regularly dispensed exotic looking goodies, like some yummy Dutch things they called canoes. Han’s pack must have been heavy.

With the slow pace I was a little worried about the next day, which was largely red line for me. At the hut, several of us tested the weight of Vlad’s pack. It was heavy. Very heavy. We made him empty out the contents. What was in there? A mini-library of hardback books perhaps? Out came: 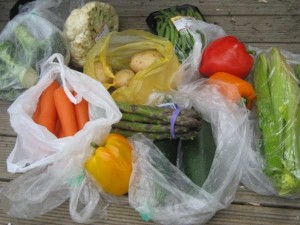 Needless to say, we ate healthily on this trip, starting with an entree of celery, cucumber and hummus (the latter courtesy of Mika). But there’s also a lesson here for trip leaders. When you have novice trampers on your trip, be precise about what they are to bring. I remember one trip where a newbie brought nothing for lunch or breakfast, as the trip leader had assumed that everyone on a medium trip would be experienced club trampers and had thus provided insufficient information. I had made a similar mistake (although at least I got the message through about appropriate gear).

Relieved of several kg of weight, Vlad (now re-named ‘Vegie man’) found day two a lot easier. Which was fortunate, as the day began with a steady climb up to the top of Arete, at 1500 metres. It was disappointingly claggy and cold up there, and we decided to head for an early lunch in the two-bunk Arete Hut. (Cozy, but a bit of a squeeze). On leaving we temporarily acquired two additional members for our party – a couple who were trying to find the route to Arete Forks, which was on our way. They had taken a wrong turning the day before in perfect weather, and ended up in Dracophyllum hut for the night.

The weather gradually cleared, and by the time we reached Waiohine Pinnacles visibility was pretty good. I was wondering how Vlad, on his first New Zealand tramp, would find the Pinnacles, but he glided over them with ease. A couple of the others were a bit hesitant in a one or two spots, but overall the traverse was pretty straight-forward.

I had stayed in Tarn Ridge hut twice before, but this time I discovered that it actually has views that consist of more than the inside of a cloud. The sky had cleared during the afternoon, and we could see right through to Dundas in the North. We were sharing the hut with a bearded guy who at 7 pm decided to head off to Dorset Ridge hut. It was still light when he left at 8, but wouldn’t be for long. It isn’t far, and I presume he got there ok.

Before the trip, the forecast for Monday was poor, with rainy northerlies expected in the morning and rainy southerlies in the afternoon. But the day dawned fine. It was claggy over Girdlestone but clearing rapidly as we headed towards Mitre. The top of Mitre was near windless with great views in every direction. Vlad was impressed, and his camera worked overtime. We paused there for ages, taking in the panorama and identifying landmarks like the aforementioned Dorset Ridge Hut.

It got warmer and warmer as we headed down. Not far from Mitre Flats we passed a Swedish guy in jeans with a day pack. ‘He’ll get hot climbing up there,’ I thought. On
Tuesday the Masterton police left a message on my answerphone asking if we’d seen him. By the time I got the message the Swedish guy had walked out, having got lost on the way down and spent a cold night in the bush.

We dallied for an hour in the sun outside Mitre Flats hut. I couldn’t remember exactly how long it took to get to the road end, and there was no information in the hut. Dirk thought about two hours, but I was thinking we’d better allow for nearer three. We had a pickup at the road end arranged to take us to the Masterton train, our only way of getting home other than taxi. The sign at the bridge said four hours. If it took anywhere near that we would miss our train by a long way. I panicked, and set a fast pace. Way too fast as it turned out. It only took 2 ½ hours for the first of us to reach the road end, and the stragglers weren’t far behind. We arrived at the station nearly 45 minutes before the train was due to leave. The ticket office wasn’t even open yet. It was so nice not having to go over the Rimutaka Hill – although for some reason the train only went as far as Upper Hutt, and we were crammed into a railways bus for the rest of the trip.

I got an e-mail from Vlad a couple of days later. He was keen to get into the hills again, and was off to buy more gear for his next tramping trip. And this time he’d have a lighter pack.

2 thoughts on “Northern Crossing of the Tararuas”