What a wonderful weekend trip to Paua Hut. The weather was superb and we had enthusiastic children that loved the whole experience, helped by having each other as company and fireworks and chocolate snacks.
More about that later.

We all met up at the Catchpool carpark on a beautiful Saturday morning at 10.30am. Constanze and Christian had organised this family tramp and had their 2 year old son, Gustav, along for the fun. He was a great wee boy and ran on his wee legs for a good portion of the walk and hopped into his mother’s backpack when he needed a break. Deborah was there on her own and Gustav took a shine to her over the course of the weekend – his wee hugs and antics making Deborah laugh often.

Daniel came with his two girls, Charlotte (6) and Alice (4) and the mountain buggy with their stuff in it. The mountain buggy manufacturers would have been proud to see the sterling service this model did in carrying all the gear (a huge Macpac backpack and a huge drysack) for Daniel’s family.

Mike and I turned up with one less child than expected (she was sick), but our son Toby (6) had his friend Brennan (8) along as company and they both had a ball. Toby and Brennan carried quite a bit of their stuff in day packs and reduced the load on me and Mike. That left plenty of room for a box of fireworks. Choice!

We left the carpark at 11am (it does take a while to organise children) and started into the forest. The weather was lovely and warm and the shade below the trees was welcome. We made good time to Midway Bridge where we stopped for lunch number 1. The children played trolls under the bridge while we ate lunch. Other walkers seemed hardly fazed by it at all. Lucky for us, eh? 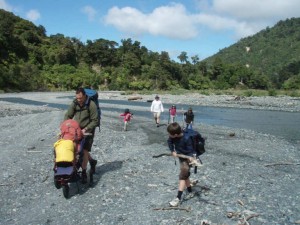 By the time we burst out into the river valley Gustav was asleep on his mother’s back so Constanze continued to the hut while we waited for the others. They had taken a short side trip to the old hut 10 minutes from the river (I don’t remember the name of it) so we waited for a wee while. The walk down the river valley took almost as long as the track from the carpark. Not too sure how that happened – children, water, mud, stones, drift wood. They are all of great interest to the kids. I caught my son trying to strip off for a swim at one point. I was last at Paua Hut at the start of autumn and I am sure I could see quite a bit of recent scouring from the winter waters as we walked down the river. There was a slip below Paua Hut on the clay cliff bank that wasn’t there last time.

We caught up with another trip to Paua Hut – Melissa was leading a medium trip of keen trampers. They pitched their fly not too far from the hut.

Once we were at Paua Hut, Christian declared the water full of wriggly things and promptly boiled up a few kettle loads. Can’t be too careful with children’s tummies. The kids explored around and played in the hut and on the rope swing while we started dinner. Christian cooked up a storm and we ate pasta with tomato and vege sauce. Everyone had a healthy appetite. Mike prepared trifle for dessert and that went down a treat too.

We then waited for the darkness to kick in so we could set off some fireworks. Melissa’s group had fireworks as well. They had also started a great campfire so we used that as our base and the kids got stuck in with sparklers. This kept them going for ages until it was truly dark. Then we let off scores of fireworks. Poor wee Gustav took a while to settle in the hut during the fireworks display so his parents missed most of the fun. I hoped there were no hunters stalking anything within cooee of our location. They would not be happy with us.

The kids were late into bed and after the excitement and novelty of it all died down, they all slept very well. The adults stayed up trying to re-design the trip list form to accommodate the extra information family trips require and discussing favourite German and English words. The things you do when there is no television, eh? Turns out that Constanze likes saying the word “photographer” and I like saying the word “Schluessel”. We fell into bed and I was comatose almost immediately. Apparently Gustav woke during the night and his parents were concerned he may have woken us up. Not me! Didn’t hear a thing all night.

In the morning we discovered something else was most definitely up and about during the night – it wasn’t just Gustav and Christian. Melissa’s pack had a huge hole gnawed into it from a cheeky rat. The muesli proved too enticing for the rats. Her pack was in the lean-to because they were all sleeping under the fly. So, be careful leaving your gear there overnight – perhaps keep your food with you! Melissa will be popping in to get her pack fixed after her next tramp!

My breakfast was leftover yummy pasta (there were a few other takers too). Mike seemed happy polishing off the last of the trifle for his breakfast. No wonder he had energy to burn on the way home. We were all packed up and ready to leave by 10am. There was a light misty rain at times but within 20 minutes from the hut the sun was out and we had a lovely walk back to the car park. The children walked much faster back to the car than they did getting to the hut. Perhaps the lure of lots of chocolate snacks did the trick? We had lunch again at Midway Bridge and there was more troll action happening under the bridge. We popped out into the car park bathed in sunshine and happy with the weekend. What a lot of fun. Toby and Brennan were very happy with their adventure. That is what counts on a family tramping trip.