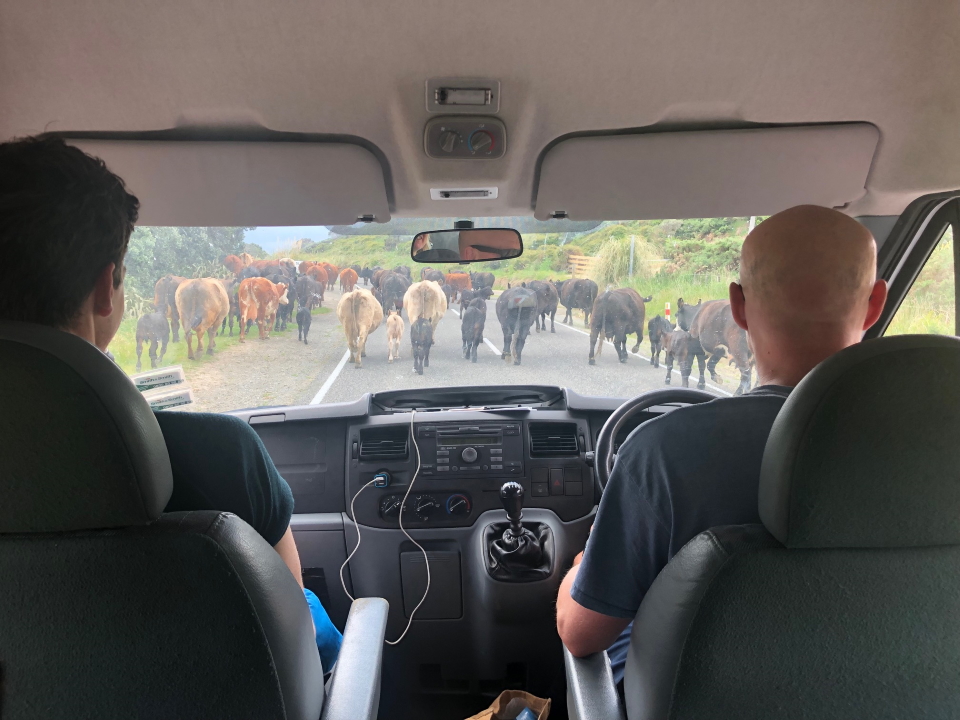 After three dead cows along the river, lots of river walking and a gust or two we made it to Mangatoetoe hut, about an hour in from the van.

The night before, we’d driven to the campsite with the Easy group (in the other van), all stopping at Lake Ferry Hotel Restaurant for dinner. We caught a magnificent sunset over the water, more than an hour after we’d all ordered. After most of our group had seen the “All Blacks World Cup Champions” tattoo proudly shown off by its owner, we ate and then made it to the Putangirua campground (after a little detour to a dead-end track from the hotel).

The morning started calmly enough until Dan talked through the windy weather forecast with Richard (leading the Easy group), and an attempt at boiling water was foiled. Neatly primed, my stove started well but then flared – not helped by being turned up not off – reaching flames close to a metre awaking me and Catherine up before dying out.

With strong north-westerlies predicted, plans changed from the Crossing to a trip to Kawakawa hut.

The drive to the tramp’s start was a highlight in itself, with a few cows strolling near the beach and a sheep or two on the road making us feel like we were on a Kiwi adventure.  We had a few native Kiwis (Dan, Catherine, Katie and Katie) on-board to add to the experience.

Our first option was a loop starting near Ngawi but which meant going through private land. The “No Unauthorised Entry” and other signs to the property suggested we’d not be welcome unless paying for one of their private tours. This left us with plan B, walking from the roadend via Mangatoetoe stream and hut to Kawakawa hut return.

From Mangatoetoe hut towards Kawakawa, we followed very obvious markers for about 15 minutes, only to quickly lose them and find the track petering out and going down another adventure. With the GPS, we cut across off-track back towards the correct stream, shortly after finding the track again.

There was a short scramble near the stream, with rope to help us, before getting into tree roots and some rough track on the way up and across the saddle. On the way we got lessons about nettles and ongaonga, and soon got good at spotting it and warning others.

About half way across the saddle we stopped for a leisurely lunch before the steep, rough decline to the river, where we had about another hour’s walking.

At Kawakawa hut, the lure of a cool river got the better of most of us, although James and Katie M went off for more walking, exploring up the nearby ridge.

Katie A was first in the water, fully clothed so she could emerge clean and gleaming. Dan, Catherine and I followed with a few less layers, shortly joined by Werner. Raquel managed to get her feet wet while wondering what was wrong with us sitting in the cold water.

The next few hours were spent talking and sunning by the river and on the grass, reading Kindles, phones, watching videos, and strolling.

Dinner was a great team effort, juggling the two large billies between one small and the other fickle stove. A delicious green curry happily stuffed vegans, vegetarians and tuna-escarians.

Kawakawa hut is a classic hunter’s roadend hut, with a few pieces of broken glass and some animal bones scattered around. A relatively compact six-bunk hut, the bunks were mesh spring topped with a balsa-like wood board.  Two of the top bunks when full just missed the sleepers below but the third sagged enough that we agreed it wasn’t safe to try, giving us only five beds. Katie A set up her tent to have a magical night without snorers. Raquel and James found enough space on the floor for us to walk past, although one pack did end up as James’ pillow.

After a hot night for most of us, even with the windows partly open, we were all ready to go by 9am. The first hour or so was walking back up the river before reaching the big climb of the trip, the steep 100m up we endured going down the day before. From there, across the saddle and down again before reaching Mangatoetoe hut for lunch an hour and a half later. On the return to the carpark, we found some tracks and a 4WD track that gave us some change from river walking.

On the drive back, more Kiwi adventures occurred as we passed a few sheep strolling across or up the road, before ending up in the midst of a muster of cows. Dan patiently drove with cows beside and in front for about 15 minutes before finally breaking through without cows getting in front again.

A stop in Featherstone for coffee on the way home as the rains came was the perfect way to end the Kiwi Kawakawa experience. Thanks Dan for leading and everyone in the group for such an awesome trip.