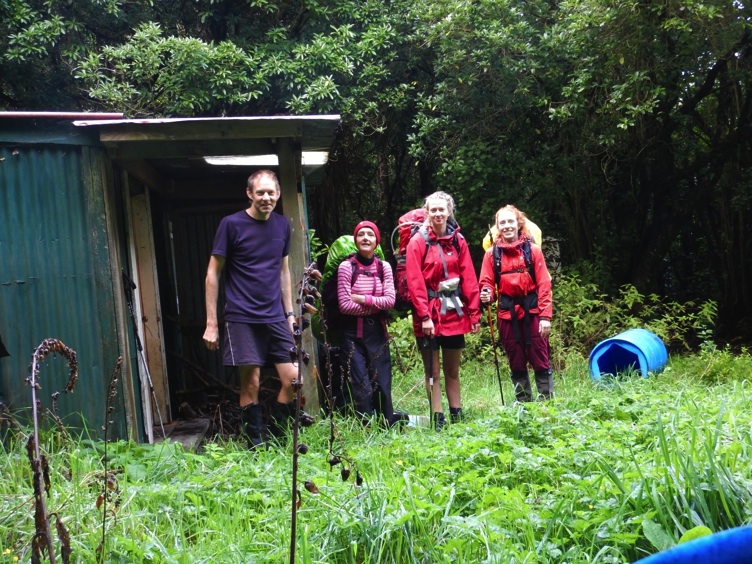 I spotted the Papatahi Crossing tramp on the schedule and signed up straight away. I’d always been keen to do this crossing but had never quite got around to it. The crossing is a good chance to explore a more isolated corner of the Remutaka Forest Park, visit a hut and also to get to the second highest point in the Remutaka FP.

A long time ago one of my friends had gone through a ‘survivalist’ phase and we had stashed a plastic drum with food, clothes and other items at the start of the Papatahi track near the Orongorongo river. I was interested to see if the stash was still there and this trip would allow me to do this.

Four of us left Wellington on the Saturday morning and headed to the Catchpool Valley. We started walking about 9am and were soon into the Orongorongo valley. We headed up the valley along the Big Bend track but also spent some time travelling over the river flats. It was drizzling by lunchtime but we had a dry lunch at Baine-iti hut. This is a private hut that is always open. It was built in 1929/30 and is the oldest hut in the Orongorongo valley.

After lunch we continued travelling upstream. The valley becomes narrower and rougher but we had no trouble crossing the river. Just before 1pm we found the start of the Papatahi Track in the North Boulder Stream. The sign said 4-5 hours to Wharepapa hut and we were confident we could get there in about 4 and half hours (with an ETA of about 5.30pm).

We filled our water bottles and started climbing. At this point I was carefully studying the bush looking for the stash site. I remembered it was by a log just off the track. A few minutes after starting on the track I spotted the plastic drum. It was where we had left it all those years ago. It was still sealed and I could see some of the items inside the drum through the plastic. It does not look like anyone has opened the drum in the years it has been sitting there. There was not enough time to open the drum so I left it where it was as we continued.

The initial part of the track is steep and is on unstable terrain so we had quite a scramble for a while using plants and branches to help us. As we ascended we had views of the Orongorongo river below us and in the far distance wind turbines on the hills around Wellington. The bush changed into lovely mossy ‘goblin forest’ as we ascended.

We emerged out of the bush onto Papatahi (height 902m) where we had a break in a clearing in the sun.

After this the track deteriorated and markers became few and far between. It is a steep descent from Papatahi and we all had lots of slips. We really had to concentrate on route finding and at times had to back-track to find the track and also use the map and compass to clarify our direction of travel. In places there were dead tree-falls that obscured the track so we had lots of clambering around/over/through tree-falls to keep to the track. It does not seem that the Papatahi Crossing is used much as the track was pretty vague on the eastern side of the Remutaka range.

We were all feeling tired but the descent continued and as time went on the bush became darker. Our ETA of 5.30pm had been and gone and we were still descending. Near the bottom of the hill we could hear the Wharepapa River and this perked us up. Wharepapa Hut is located near the river so we thought we were pretty close to our destination.

At this point the track disappeared completely. We bashed through some bush and scrub and emerged onto the river. As we emerged from the shelter of the bush it started to pour with rain. So we were tired, drenched and close to the hut but not entirely sure quite where the hut was. We studied the map, compass and GPS and thrashed around in scrub and the river looking for the Hut. After some time searching we found a cairn about 50 meters downstream of where we came out of the bush. A few minutes later we were in Wharepapa Hut and removing our drenched jackets and clothes. It was 6.30pm so we had had 9 and a half hours on the go.

We had the Hut to ourselves and we got busy changing into dry clothes, having hot drinks and getting the fire going. After dinner and dessert (apple crumble) we went to bed.

Wharepapa Hut is in a small clearing and is clean and tidy with five bunks and new looking mattresses. I was expecting the hut to be damp due to its location but was dry inside. The last hut book entry before us was from mid February but I think more people use the hut than indicated in the book.

Uta had allowed us a sleep-in till 8am on the Sunday as we didn’t have as far to travel. The initial part of the track from Wharepapa to the Western Lake road continued the theme of the day before : a bit vague, tree-falls and a shortage of track markers. It was one of those tracks where if you take your eyes off the track for a couple of seconds you have to stop and concentrate on finding it again.

We also descended Aimee’s infamous ‘waterfall of mud’. There is a thin piece of twine here but it is not strong enough to support the weight of a tramper (and might not be strong enough either to raise or lower a pack) so we slid down as best we could.

As we got closer to the road the track improved. Before the track reaches farmland there is a 1.5km stretch of track through beautiful beech forest on a gentle slope. We all enjoyed this part of the track as it is quite rare to be walking through flat beech forest. I was wondering why this land had not been cleared in the past  – most flat land was cleared for farming.

Our track challenges were not quite over as we neared the end of the crossing. The last part of the track crosses farmland. Orange markers were in short supply and we had a couple of fence crossings as we tried to follow the route to the road. We also had to cross a drainage ditch a couple of times as we made our way to the road. The stream in this ditch was deceptively deep and at one point Kate sunk to her waist in the water while crossing the ditch.

About four hours after leaving the hut we reached the end of the Papatahi Crossing to find Matt waiting for us with the car. We piled into the car and then had a long trip back to the Catchpool Valley to collect Uta’s car and then home to Wellington.

I really enjoyed this tramp and the challenge of the route finding, terrain and weather. It was good to find the stash and also to see Wharepapa Hut. Thanks to Uta for organizing and leading such an enjoyable tramp.