This trip was a merger of the Pell Stream (Easy) and Lake Daniell (Easy-Medium) trips. David’s original plan was to camp at Kawatiri Junction on Friday night, get to Pell Stream Hut on Saturday night, and continue to Manson-Nicholls Memorial Hut at Lake Daniell on Sunday night. In retrospect, it’s clear now that the Easy trip was actually Lake Daniell, while Pell Stream would probably have been EM – but we didn’t get there, so we don’t really know.

After a night at the DOC campsite at Kawatiri Junction ($6 each), where sandflies tormented those of us under the fly, we made an early getaway and headed to Murchison for a café breakfast – meat pies were a popular choice.

We then drove south-west to the Lewis Pass area and Marble Hill carpark, near Spring’s Junction. The sandflies were very bad and it was quite hard to slap on the insect repellent fast enough. From the road-end we walked to the Maruia River and contemplated crossing. The map showed a walking track to Lake Daniell on the true right of the Alfred River and a four-wheel-drive track on the true left. We decided that since the river was flowing quite strongly we’d take the walking track. Probably nicer to walk along, too.

About 5 minutes along the track we came to a narrow gorge called ‘The Sluice Box’ and spent some time staring into the rushing blue-green junction of the Maruia and Alfred Rivers.

The Lake Daniell track has a good easy gradient (lowest point 453 metres; highest point 580 metres), is well maintained, and passes through some of the nicest beech forest we’ve seen. At 8.4 kilometres long (about 3 hours) it makes a good day walk. 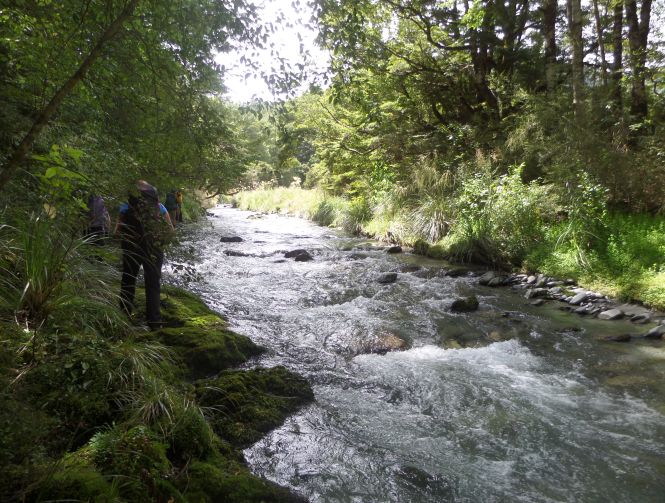 About half way along the Lake Daniell track we turned off the track and headed downhill through the trees to cross the Alfred River close to the confluence with Pell Stream. I didn’t notice any particular marker at the point we left the track but it was probably in the vicinity of the unnamed side stream opposite Pell Stream. Once at the Alfred River, we walked upstream for a minute or two, crossed over, and climbed a bank to reach a large undulating pasture known as Frazer’s Flat, with waist-high grasses, and dotted here and there with trees. 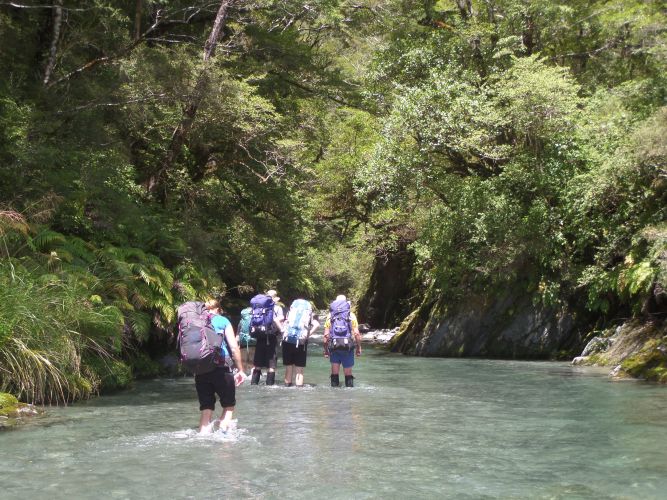 We headed upstream (Pell Stream) toward the far end where we hoped to find a privately owned hut called Blackadder Rest. Eventually we spotted its corrugated iron roof through the trees. The hut was named for 20-year-old Ross Blackadder who died near Frazer’s Flat in 1938. Information provided inside the hut about the Blackadder family and the local area suggests Blackadder Rest was built around 2013. Although privately owned, the hut is unlocked and available for visitors to shelter in or cook – but there are no bunks.

After a lunch break we set off to find the track to Pell Stream hut. Unfortunately, this was harder than expected to find. We walked up the stream bank until the valley converged with steep-sided hills. Antonia and Margaret dropped their packs and climbed through the bush to see if they could find the track, but there was no sign of anything likely. We considered continuing up the streambed but that seemed foolhardy because the map showed the terrain upstream becoming steep and gorge-like. So we roamed back down passed the hut and eventually found the end of the four-wheel-drive track. This we followed uphill until we found a fairly subtle side track heading south-east toward the river gorge. It was just at this point of embarking on the journey to Pell Stream hut that one of our group declared a pulled calf muscle. After some discussion it was decided that it would be unsafe to continue to Pell Stream because we had heard that the track was poorly maintained. [The website remotehuts.co.nz provides useful information on accessing Pell Stream Hut.] 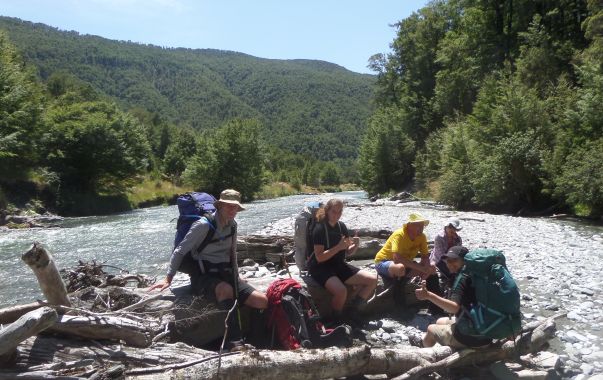 Instead we returned to Blackadder Rest and enjoyed an idyllic afternoon by the river. Our idyll was over though once the sandflies discovered us just before dinner. Seven slept under the fly and one in the hut. It was a very warm night, but between the warmth of the night and the bugs, it was hard to stay zipped up in a sleeping bag – and equally hard not to. A mosquito net would be the thing to take. 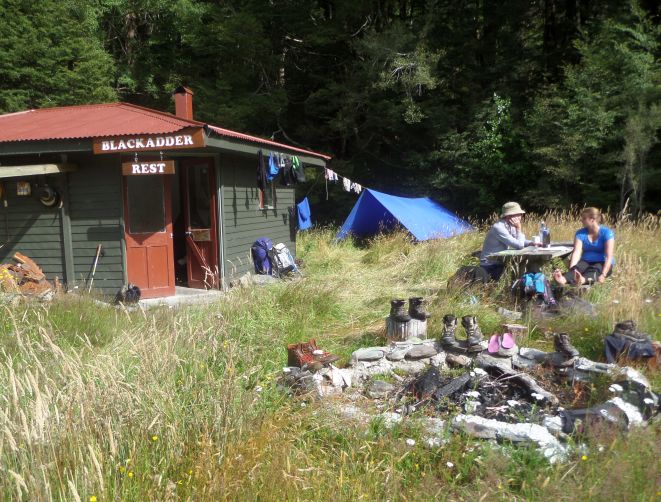 Next morning it was still warm but had clouded over; light drizzle began. We retraced our path through the grassy meadow, crossed the river, climbed the bank, and regained the Lake Daniell track.

After a short walk, an hour possibly, we arrived at Manson-Nicholls Memorial Hut. There were plenty of people around but the hut was not full (some people camped and others were just there for the day). After lunch, the group walked for about half an hour or so to the far end of the lake. We sat on a bench and a fallen tree and looked across the lake to the hut, just visible as a tiny dot.

After dinner we watched as the hut warden lowered a glowing lantern into the water at the end of the jetty. A good number of eels swam up to investigate the light. 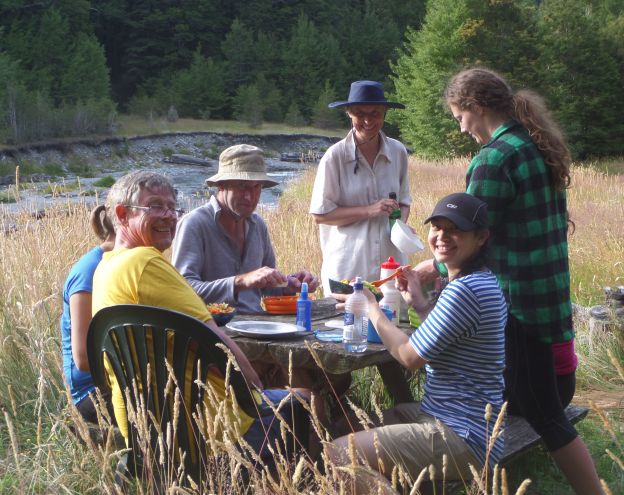 One of the campers had bought a fishing licence and after a mere one hour’s angling caught a good-sized trout. He started a fire in the fire pit in front of the hut, but wasn’t sure how best to cook the fish without aluminium foil. David B suggested he wrap the fish in damp newspaper (found in the hut). So we stood around the fire in light drizzle, observing the cooking process and encouraging the cook – who generously shared the results.

In the morning we geared up and headed back down the track to Marble Hill. An extensive patch of wild raspberries was discovered – and fully enjoyed – along the way. After a quick dip in the river we climbed back in the van and headed to Murchison for lunch. Fish and chips at Picton and home by 10pm – a great trip. 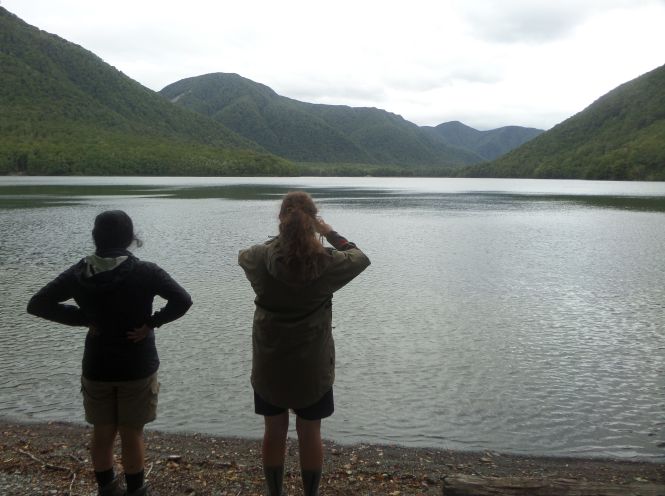 Pell Stream hut has 4 bunks. Had we gotten there, some of us would have slept outside – but it’s free. Next time! (Heavy-duty insect repellent is a must.)