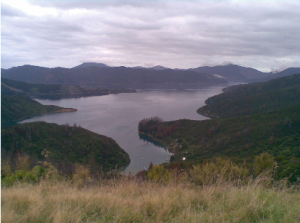 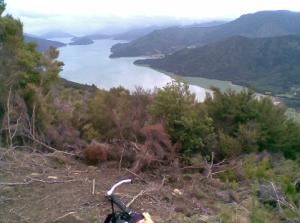 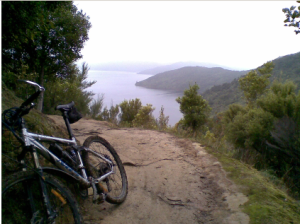 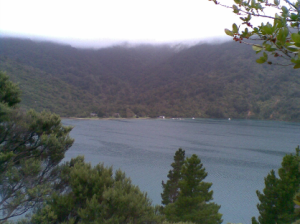 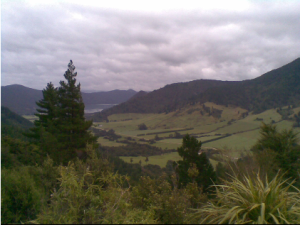 It looked like being one of those trips when before you set sail on the ferry on Friday night, they announce that the crossing will be pretty bad, then you feel sick even before you’ve got past Evens bay, its an ominous sign. Then despite having a rather flat crossing in the stright, the backpackers having no record of your booking or credit card details, it was possibly going to be that trip.

However on a slightly overcast and cool Saturday morning, with the bakery and the foursquare  opening on time to allow a post check in dash for the purchasing of last minute food, we set sail on time into Queen Charlotte Sound – or so we thought. It turns out that 4 young ladies decided that they would arrive at 8.05am for the 8am sailing, so we turned around back around into port… Attempt number 2 however met with a bit more success and finally we landed at Ship cove with a teasing glimpse of blue sky above the outer Sounds being present.

Letting the hardcore Lycra clad group of gentlemen on extra shiny bikes go ahead (they having 50km to cover that day) and allowing for the German tourists to get off the wharf we started what was the be the major ascent of the day. The previous couple of days of rain made it one slippery push up the hill; however we were rewarded at the top with a glimpse into Resolution bay and a family of Aussie tourists who were off to meet a boat, and thankfully out of the way of 8 mountain bikers whizzing down the hills.

Down hill number 1 of the day offered a chance to test the brakes and enjoy it, knowing that the track was clear to enjoy, apart from the friendly Weka who were huffing and puffing their chests at their mates.

The reward for dodging the weka, and 4 gates that were far too close together, was the first view across Endeavour Inlet and following that a good 15 minutes of weaving down through the roots and drop offs, which would prove to be possibly the most enjoyable section of the ride for most of the group. Eventually the track levelled off as we arrived at the cluster of houses situated alongside Tawa Bay.

Lunch was taken by some of the party slightly further round the inlet at Furneaux Lodge. The 4 gentlemen in their lycra were just leaving as I arrived, which offered the bonus of having some others out in front to nicely clear the path for the rest of us on two wheels!

The route along the shore of Endeavour Inlet around to Camp Bay, provides about 90 minutes of 4 wheel drive type track with the odd twisty uphill section and only a few trampers to avoid. It’s not the most exciting of sections but allows a wee bit of speed and does not throw up too many murderous climbs to finish off the day.

Arriving at Camp Bay, the challenge to was find our accommodation for the night. Crossing the lawns of both Punga Cove and Mahar Lodge led onto a rather narrow track and a few steps to negotiate with the 2 wheels. However a trail of pink triangles (must be standard issue for QC accommodation?) guided us to the home stay with Noeline who was rather sprightly for her 80 years. The rooms also came with a 4 legged friend which at least one member of the party had great enjoyment chasing round the house. After a rather yummy meal at the Punga Cove cafe and some evening Milky Way watching, the duvet was calling.

Sunday started with another slightly grey day, but almost perfect conditions for a bike ride. Saying good bye to our host and dropping packs down on the wharf for onward collection back to Picton it was time to go and enjoy the day. The only slight problem from starting at Camp Bay, is that the only way is up. For starters there is a nice climb to around 400 Meters (that’s 2 mount Vics), on a very smooth clay track with not much grip.

Despite the mud, sweat and hunters along the top section, there were some great views. Being able to enjoy the sights looking down into the Bay of Many Coves made up for the uphills, with various selection of home brew lookout signs at suitable points to take a break. There were some slightly exposed sections at times, always fun when wet, trying to ride at a reasonable speed but not tumble down the steep hillside below and that was only one side of the track. On the right hand side, fleeting views looking towards Kenepuru Sound were offered at various points to boot. Despite the exposed sections, the downhill from shelter at Black Rock down towards the saddle above Portage provided excellent downhill (quite dry in places despite the previous few days worth of terrible weather) and the bonus of a quiet track to cruise downwards.

A somewhat breezy rest stop was taken at the Portage Hotel for some of the group. I was even served, despite being rather caked with bits of fresh mud from the track, though I resisted the urge to play on the giant chess set on the front lawn in my muddy state.

The ladies decided that the centre section past Torea Saddle, which mainly consisted of a ridiculously steep up hill and an almost unrideable down hill to Mistletoe Bay was best left unridden. Colin and I decided that that would be far too sensible a short cut to take and continued on regardless. Yes the view by the microwave station was great but I suspect that the road short cut was the somewhat sensible option for a few kms – yes Anna you told me so.

Arriving at the junction down to Mistletoe Bay Wharf, there was just a mere 16kms to the water taxi. According to the route profile, there is an overall decent down to sea level. Having had some great riding already and views as well, it seemed to just be the final dash for the wharf. However this final 90 minutes of riding offers some great track, and initially some teasing views into the end of the sound. However at around the 6km mark is a look out which for want of a better word offers a stunning look out to the end of the sound and across to the approach to Picton too. Even on this final section of track, despite its popularity and closeness to the main tourist routes, very few people were encountered which meant less stopping and more speed!

To top the fine Sunday afternoon’s riding, the water taxi out of Anakiwa left 30 minutes early and the crossing back into the capital arrived 15 minutes early topping off a fine weekend, despite its  somewhat slightly wobberly start.