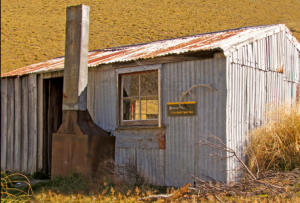 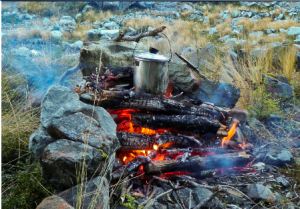 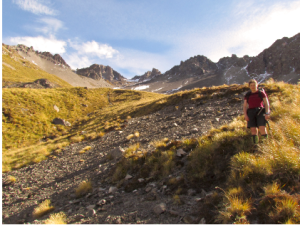 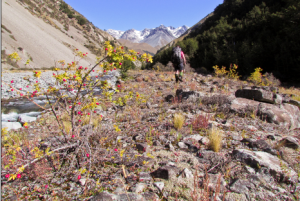 Just the name seemed to be a good enough reason for two part-time trampers, who we will call J and T, to go and visit the spur and its crooked hut. So with weekend flights already booked it really wasn’t a difficult decision for them to make.

Their usual late Friday night arrival in Christchurch was followed by a drive part way up the Rangitata Valley before they called it quits and found a very nice tree to sleep under. Next morning a layer of low mist filled the valley and the peaks were well hidden as they drove the remainder of the way to Mesopotamia. But by the time they started up Bush Stream the sun was shining through breaks in the cloud giving the promise of a fine day to come.

Travel at first was easy—a mixture of boulder hopping along the banks of the stream, with many crossings, and easy trails through the grass and bush on the terraces. There were bright red rose hips on the small bushes in the lower river which gradually gave way to that South Island favourite matagouri, but the trails missed the worst of it. J and T didn’t hurry and they stopped often for photos and to admire the view. A short but steep climb was needed to pass a bluff just before the final zigzag track up to a crooked hut where they stopped for a late lunch under a cloudless sky and warm sun.

Above them were the open tussock slopes leading up to the big screes running from almost the tops of the peaks to well down into the valleys. After lunch they sidled the slopes above the hut to a rocky spur overlooking the upper reaches of Bush Stream. Here they had the choice of climbing high to camp or dropping a short way to a small grassy flat at the upper limit of the beech forest. The thought of a more comfortable lower camp won the day so they slipped and slid down the grass to the stream below.

And there was a small clearing that was almost perfect. J and T pitched the tent, built a fireplace and collected firewood. Soon they had a cheery fire to boil the billy and J cooked a tasty meal while the sky darkened and filled with a myriad stars.

They left reasonably early next morning and climbed up the stream towards the toe of the scree dropping from Brabazon Saddle. They left their packs here and carried on towards Mount Caton. There were patches of early winter snow on the scree but mostly they climbed straight up the rock towards the peak. The ridge above the scree was a pile of tottering rock that was about as crooked as it gets, but they had expected this. So they scrambled up the ribs and gullies sending many boulders crashing away below them. They eventually reached what seemed to be a high point on the ridge and which they declared to be the summit. Maybe it was, but there was no cairn so perhaps not, but it was near enough for them and the view wouldn’t have been better anywhere else anyway.

They couldn’t quite see the peaks called the Two Thumbs as they had hoped because they were hidden by a foreground ridge but that didn’t matter too much to them because all around were wonderful views—from the dry and barren low eastern valleys to the higher snow capped peaks to the west. J and T sat for some time on the warm calm point that they had called the top—it was just too nice for them to think of going down.

It was already mid-afternoon when they reached their packs again and too late for their planned wander over Brabazon Saddle to Black Birch Stream. So it had to be back the way they had come —but that was ok as the view is always different going in the opposite direction. They hurried along a bit going down the river trying to get as far as possible before dark, all the while watching the sky turn every possible shade of pink and purple before finally fading to grey and then black when they had to put on head torches to find the way.

They lost the track in the matagouri on the river flats a couple of times but finally made it back to the car just before 8 o’clock. What a perfect weekend trip away it had been for J and T. They had both enjoyed their crooked trip to the crooked spur so much that we can be sure they already have made crooked plans to go back again sometime soon.