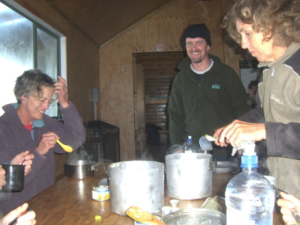 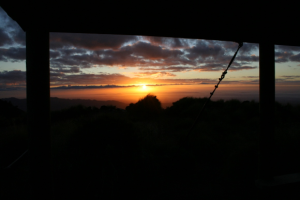 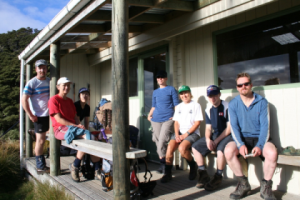 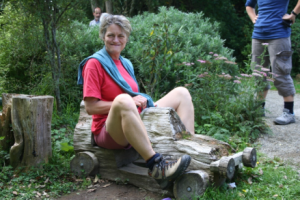 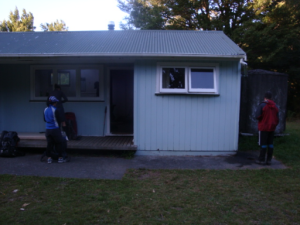 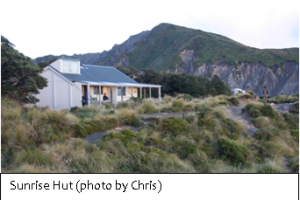 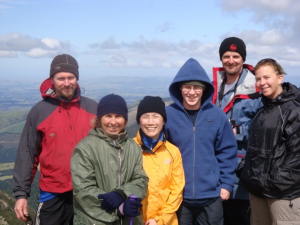 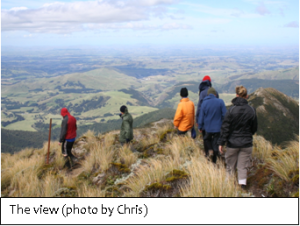 This was my third overnight trip with the WTMC and I must say also the best because of the great scenery, the nice track and the time we had for exploring and relaxing.

We left on Friday evening from the station with another group (medium) led by Kate Cushing. Jo Boyle was driving the van, doing quite a good job even when her patience was challenged as we got stuck in a very long queue on the Rimutaka Hill caused by road works. We lost a lot of time there unfortunately and it was dark when we stopped for dinner at Café Istanbul in Carterton. That had to be quick, so we all got takeaways. Helen took the wheel then and we arrived at our destination, near the end of North Block Road, rather late. Just as we started walking towards the hut, my torch decided to go on strike and I had to find my way along the farm track in near darkness. Luckily it was only 10 minutes to reach Triple X hut where we stayed for the night. It’s a small very basic hut (12 bunks) with 2 bunkrooms separated by the kitchen, but we were happy that it was there which saved us putting up the fly. We went to bed straight away, and as it wasn’t cold some people decided to sleep on the deck. I was glad to be able to borrow Penny’s torch.

On Saturday, Helen got up early to drive the other group to the start of their walk along the Waipawa River. Actually, we found out later that they could have reached it by taking the Swamp track which starts near the hut. Never mind, we’ll know that next time. When Helen came back we left for the Sunrise Hut. The track was a steady climb all the way to the hut, but mostly wide and easy terrain (it felt like paradise after my last trips in the Tararuas!). I enjoyed going through changing forest types and admiring nice views on the way even before we reached the open tops. A few educational panels along the way showed how popular this track must be with families and school groups. In spite of many stops, we arrived at the top in a slightly faster time than the 2.30 hours that were indicated at the start (that makes one feel good, doesn’t it?).

At the top we were rewarded by a superb outlook onto the Hawke’s Bay plains. The hut was also quite luxurious. It stands in a wonderful position in a tussock basin beside the bush edge. It has recently been extended and is now very large with several rooms and levels. A wide deck in the front enables you to sit outside and take in the view which you can also see through large windows in the kitchen. It had great comfort with gas cookers and a gas heater.

We had lunch and rested for a while, then we decided to brave the wind and walk (without the packs, what a relief !) up to Armstrong Saddle where the view was even better. From the ridge we were impressed by the rugged mountainside with interesting rock formations due to slips and erosion. We climbed up to where the track leads steeply down to Top Maropea Hut. After a few photos, we returned to the saddle.

Then, as we still hadn’t had enough of exploring, Helen, Penny and I walked to the top of the hill situated on the other side of the saddle, while the rest of the group went back to the hut. We joined them a while later and prepared to relax for the afternoon. Bryce led a game of cards. I played 500 for the first time, supported by the experienced Marie who was sitting by my side. 500 is actually very much like “belote”, a French card game that I used to play in France. I did some reading as well. Other groups of people were also staying in the hut but there was ample room for everyone.

Then came dinner time and on the menu was Indian rice pilaf, spicy rice and vegetables which tasted delicious. We had so much that we were able to share some with our neighbours. Then Chris came up with instant dessert : something looking a bit like custard, in two flavours : vanilla and strawberry. Very nice.

We all went to bed fairly early as we had to get up early enough the next morning not to miss the famous sunrise of Sunrise Hut !

So, on Sunday morning, everyone got up to watch the sunrise at around 7 am. We were very lucky with the weather. There were clouds there, but just enough to make the sunrise interesting. The colours were amazing and lots of photos were taken. It was so beautiful that I could hardly get away from it. We were sitting there on the deck in our sleeping bags as it was still fairly cool, sipping our cups of tea. What a life!

The walk back down the hill was very quick and we still had time to wander along the loop of the Swamp track at the bottom. We didn’t really see a swamp but a few birds and enjoyed the lovely track through the forest. Penny and Danniel stayed at the Triple X hut where we had left our packs and chose to lie in the sun instead.

Our timing was perfect as we met the other group just on our way out from the Swamp track. So we all got back to the van and Jo drove us back to Wellington, via the Kapiti coast this time, avoiding the Rimutaka roadworks. Just before the Manawatu gorge, on the Woodville end we crossed the bridge and stopped at the “Beyond the Bridge café”, a very nice place with tables and chairs outside. It must be well known in the area because it was packed. In the yard at the back were some horses which some of us were admiring when we got called back to the van.

I think this trip was enjoyed by all and I’ll be looking forward to meeting some of the group again on other trips. Thanks to all for your friendly company and to Helen for leading us and arranging such a tasty dinner.