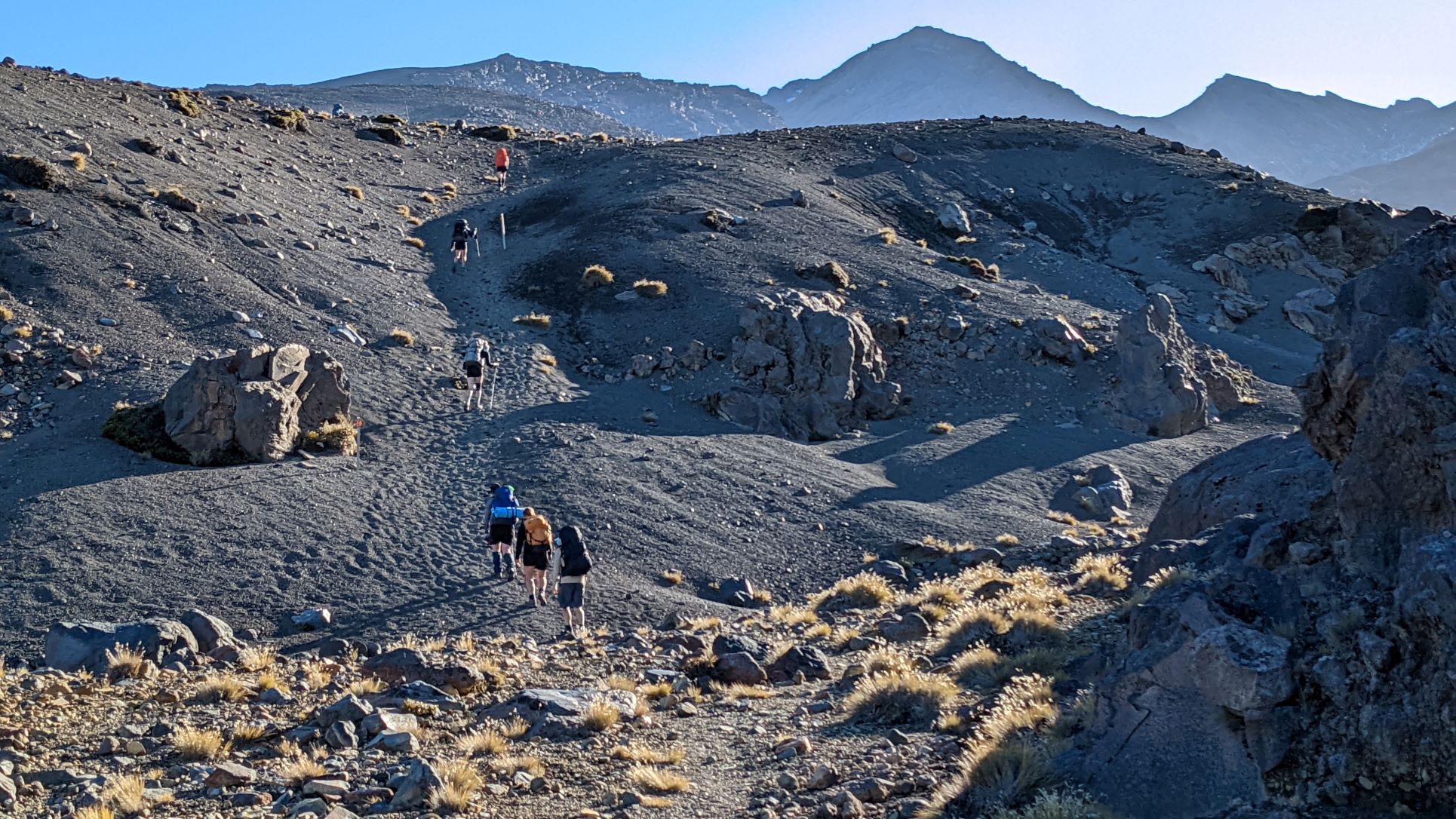 Tash was the original leader of this trip but caught covid leading up to it so handed over the reigns to me. Luckily for me she still did all the pre-trip organising, and what a thorough and excellent job she did! It was super easy for me to take over, and as a result things were very straightforward for me. Thanks Tash!

On Friday we set off from platform 9 at 5:15pm and were able to take the new Transmission Gully motorway. It was refreshing not to have to get stuck in traffic at either side of Pukerua Bay. After a stop for dinner in Bulls we arrived at the LKNZ Lodge in Ohakune at about 10pm. We were supplied with complementary earplugs which I thought was interesting. I realised overnight why – as the lodge is right on State highway 49 – the main road through town. I found it noisy, others not so much.

The next morning we left at 8am and drove the 45 minutes to Rangipo Intake Road just off State Highway 1 and roughly opposite the Waihohonu Track entry. Just before setting off at 9am, Jon noticed we still had the van’s park lights on – my bad. Jon’s astute observation saved us having a dead battery on Sunday. Note: the lights are off when the switch is set straight to up and down, not turned to the far left!

We crossed the State Highway and entered the Waihohonu Track which begins as a four wheel drive road. Note: we could have just parked the van at the DOC carpark at the end of this road – about 100 metres in. I thought the last time I did the track we had parked on Rangipo Outlet road for some reason. It would have saved us 5-10 mins walk each way and walking across the highway.

Just after setting off down the track, Bronwyn asked if she could say a karakia to the mountain, the area as a whole and for the trip ahead. It was cool to have this done and the first time I had experienced this on a tramping trip. Nice one Bronwyn 🙂

The track begins in dry, low scrub with great views of Ruapehu to the left, and Ngaruhoe to the right. The track to Waihohonu Hut is mostly surrounded by this low scrub but passes through a small patch of forest for perhaps 20 minutes. This part of the route has the most greenery and trees of the whole route. It is nice to enjoy the bush, birds and shade while it lasts. The rest of the route is very moon-like and has no shade and little shelter. But this is also why it is so special.

We reached Waihohonu hut at 1045am and had morning tea. There is a zip in the hut which was great for making a cuppa. We skipped the optional side trip to the historic Waihohonu hut and headed for Rangipo Hut.

After a couple of hours of walking across characterful volcanic landscape, we stopped at the bridge that crosses the Mangatoetoenui Stream at 110pm for lunch. On a mild, autumn day this was a pleasant place. On a hot summer day or cold or wet winter day it wouldn’t have been so enjoyable as it is exposed. There aren’t a lot of options for shelter between the two huts except avoiding any wind in the lee of a rise or hill.

We continued on in the martian landscape and crossed Tukino Ski Field Road at about 230pm. The last notable feature before the hut was the approximately 1km wide, dramatic lahar valley in which the Whangaehu River runs. It is good to keep the group spaced-out through this section so that when you reach the bridge you don’t have a big queue waiting to cross the one-person-at-a-time bridge. This is what happened to us and wasn’t ideal in an area where you aren’t supposed to stop. The gorge itself is pretty spectacular.

We reached Rangipo Hut at 5pm and had time to change and relax before getting dinner going. There is a nice view from the hut looking eastward across a mostly barren landscape towards State highway 1. The shadow of Ruapehu was displayed on a grand scale on the plain in front of us. It created a bit of an optical illusion and almost looked like a mountain in its own right.

Anna had arranged to be head chef in charge of cooking a recipe from a cookbook of her own – rice and dahl. It was very tasty and filling. We had a clear night and the stars were spectacular although a bright moon made it more difficult to see them. We had a lovely early night with everyone in bed by about 830pm.

We awoke to another glorious, sunny day. We departed the hut at 730am and set off across the sloping, undulating and gravelly terrain. Again, temperatures were mild for us, but in really hot or cold weather the track is very exposed.

At 810am we crossed the bridge in the lahar valley over the Whangaehu River in a much more spread out fashion then regathered once we had reached the designated safe zone.

Our trip’s poet laureate Jon composed a limerick as we approached the lahar valley:

We recrossed the Tukino Ski field Road an hour later at 910am. We stopped at the previous day’s lunch spot at the Mangatoetoenui Stream bridge but this time for morning tea. We reached Waihohonu Hut at 12pm and had a leisurely 45 minute lunch stop. We returned to the van at 2pm. Jon had helpfully gone ahead to collect the van from Rangipo Intake Road which saved the rest of us about 10 minutes and 500 metres or so. Shot Jon!

Our return journey took us about an hour and a half less than on the way in. I’m not sure exactly why but perhaps it was the long sleep and power packed dahl from the night before. Also we didn’t have a moderate headwind as we had had the day before.

I had done this trip before as my first trip with the club in October 2017. It was great to return four and a half years later with a new perspective and to be able to look back at what I had experienced and learned with the club over that time. I have become a much better prepared and knowledgable tramper thanks to what I have learned from fellow members and the skills trips I’ve done. Which reminds me what a great club we have.