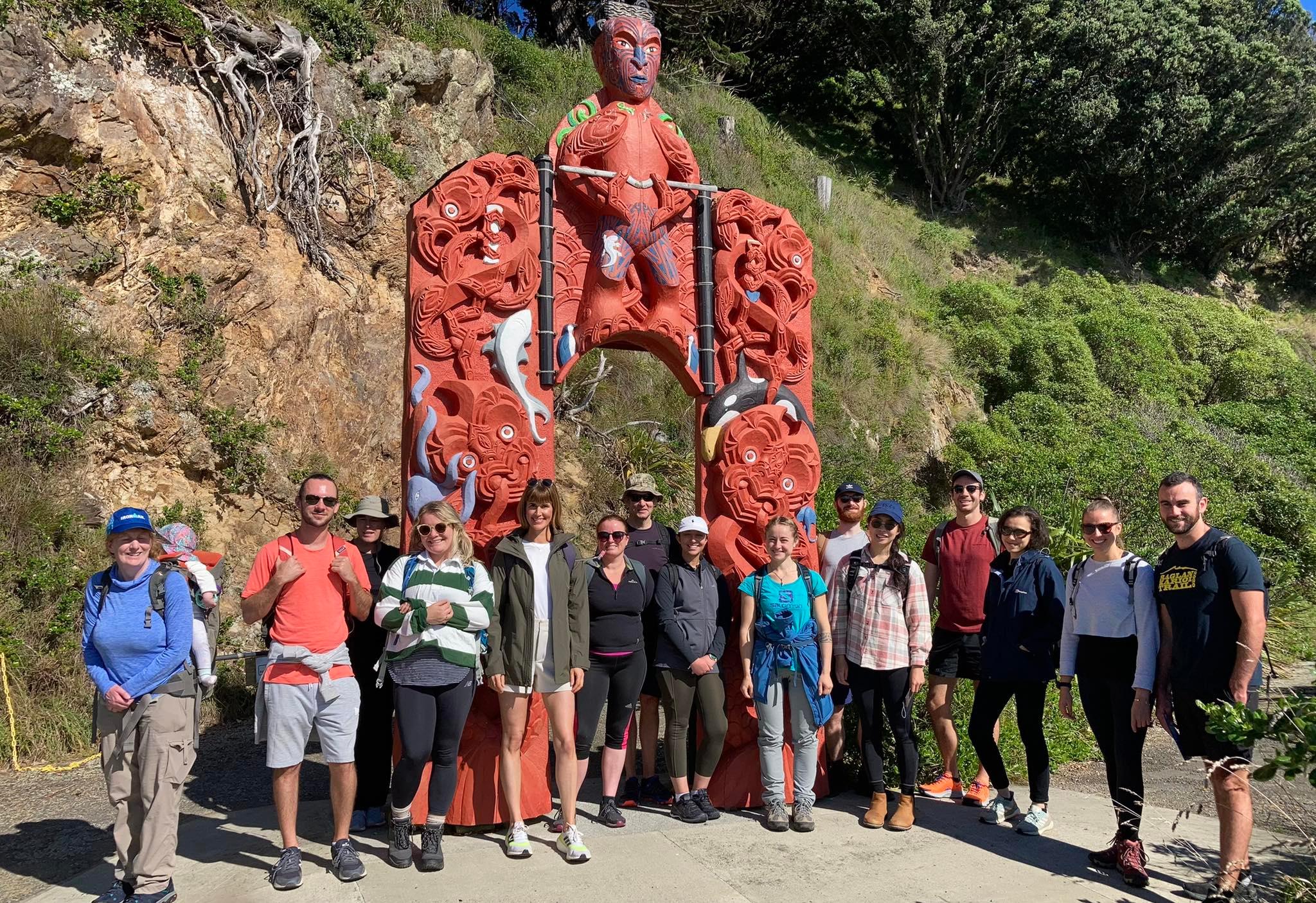 A trademark Wellington day was in store as our group came together in front of the East by West ticket office. The early morning cloud cover was in full retreat as people scouted out a coffee shop and made introductions. It would turn out that we had ample time for both activities, due to a bit of a mix up with the ticketing office which meant we missed the 10am departure and instead were booked in for the 11am crossing. In hindsight, and as I will explain later on, this turned out to be a fortuitous error for our group.

The 15 people boarding the ferry made up an interesting mix, which highlights the value day trips provide for the Club. The majority of the group were non-members, people I had mentioned the trip to and in many cases were quite new to Pōneke, or had lived here for some time and hadn’t yet found the time to visit Matiu Somes. A few of the older members of the group had visited as children, who recalled a time when visits to the island were restricted to monthly crossings and tickets allocated by ballot. Hardly conceivable now with multiple visits on a daily basis.

Those of us who managed to secure top deck seating for the 20 minute ferry trip were treated to panoramic views of the Te Whanganui-a-Tara, with barely a ripple on the water. Sail boats grasped for wind as aeroplanes rapidly gained altitude overhead. While many of us would have been delighted for the morning cruise to continue, we were soon disembarking at the Main Wharf.

Stepping out onto the concrete wharf we were greeted by Claire, a local volunteer who ushered us into a spartan DOC hut for a briefing on the island’s history and biosecurity measures. To ensure the island is kept free of predators, we were asked to search through our bags for any unwanted stowaways. We were told mice have been found in packs and kayaks, so it pays to be vigilant. Claire did a fantastic job telling us about the island and how we could explore it, before taking a group photo for us in front of the waharoa (pictured below).

With the group photo and briefing complete we started on the loop track in an anticlockwise direction. Within a few minutes we were off the main track, following a bush clad track with the rocky shoreline line a steep drop below. Taking in the views and chatter amongst the group, we would have missed a key attraction if it weren’t for the keen eye of Fiona. Dotted along the bank at irregular intervals were small plastic mats. Lifting them up revealed a scurry of activity, as skinks and geckos darted out of sight. Matiu Somes is home to eight species of reptiles found only in New Zealand, such as the copper skink and forest gecko.

Further local fauna encounters were to follow as we met the residents of the Weta hotel. The manu on the island were impossible to ignore, with nesting gulls circling and screeching above, while piwakawaka flitted about constantly. Chun had the bright idea to bring binoculars, and spotted what appeared to be a ball of young Kahawai spinning in the shallows.

Within 30 minutes we had reached the lighthouse at the southern end of the island. Still in operation the replacement you see today was built in the early 1900s, which replaced the first harbour light built in 1866 – the first in the country.

From the lighthouse it’s a short stair climb to the WW2 gun emplacements and the highest point on the island. It also made an ideal lunch spot, with 360 views of the harbour and overlooking the historic buildings on the island which we would explore after lunch.

A stroll down through a paddock and through the resident sheep flock led us into the former quarantine facilities. Matiu Somes served as an animal quarantine site right up until 1995, as livestock brought into the country were checked for any unwanted diseases before moving onto the mainland. According to one ranger, the need for such quarantine sites in New Zealand has dropped as most livestock now enter New Zealand as embryos. The empty stock yards and disinfectant stations do have an eerie feeling as you explore them.

Matiu Somes also kept people confined to its rocky shores. When the England came into Wellington Harbour flying the yellow quarantine flag, its passengers were sent to the island, a number of whom would perish there. We would later visit the urupa and monument to those who lost their lives.

The most tragic case was that of Kim Lee in 1903. Lee was suspected of having leprosy, and was quarantined on nearby Mokopuna Island. He had little more than a cave for shelter, and supplies were sometimes sent over by boat or flying fox. Kim Lee died 6 months after his exile, and it is believed he was more likely to have had tuberculosis or an auto-immune disease rather than leprosy.

The island was also used to intern German POWs in WWI and Italian internees in WW2. We weren’t sure if the Italians were POWs or simply local residents who were deemed possible threats to the allied war effort. At the island’s education centre, you can read some of the correspondence between the guards, the internees and their families.

After meandering through the quarantine sites, volunteer Claire found and led us to an unused fire hose box. Inside it was teaming with raukawa gecko! She managed to pick up a few up and let some of us hold them, although they seemed pretty keen to scamper off of us.

We decided to do one more lap of the island, this time following the other half of the loop track. It was noticeably more lush on the eastern side of the island. Within no time we had come back to the lighthouse, and followed our earlier route back up through the paddocks and buildings, before heading down to the wharf.

Some of us couldn’t resist the urge to take the plunge off the wharf, and a quick dip was enough for a refresher. It wasn’t long before the 3.20 ferry arrived to take us back to Queen’s Wharf, besides Evelyn and Fiona who were travelling back to Days Bay.

Matiu Somes turned out to be a fantastic trip. It’s a small island with a rich and fascinating history, as well as being a haven for some of our most precious taonga. While it won’t break a sweat for most WTMCers, it’s a great day out never-the-less!