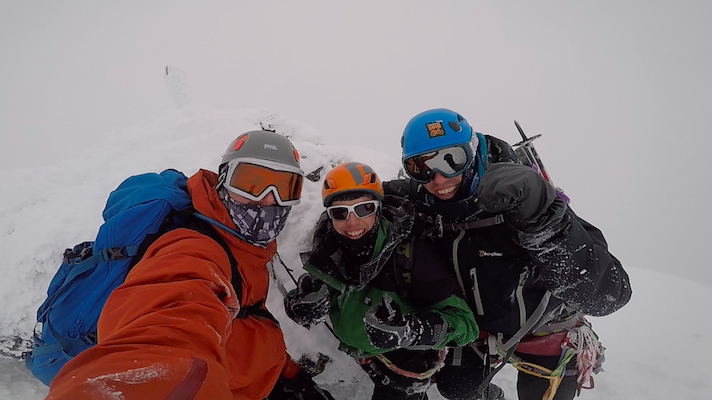 The tip of my left pick tentatively balances on the smallest of burrs in the rock. I wriggle it around, and angle the axe up to make sure that it doesn’t pop off as I haul up. I’m on a top rope, but that doesn’t provide much comfort when you are 6 metres up a vertical chimney; below that a straight 1500m drop to the plains of Frankton.

My other axe is wedged into a horizontal crack in the rock and I am hanging all my weight off the handle, the shaft unnervingly bending under the tension. “Comfortable” that the placement is going to hold I ease my body weight to the left and onto the tips of my front two crampon points, as slowly as I possibly can. The foot placement holds, and I move up into position around a horrible bulge of rock – my fault for drifting a good metre off route. I lock off my left arm on barely a few millimetres of contact with the pick and the rock, and start to remove the other axe from the crack. As I do so, the left pick slips ever so slightly, and for a split second I can literally taste the bile in my throat as I prepare to fall… but I don’t… and so it continues for the next 15 mins.

Eventually, exhausted yet ecstatic, I call Nick to take me in as I sit face to face with the anchor at the top of a grade M4 mixed climbing pitch (for context, mixed climbing grades go up to around the M12-14 mark currently). The most exhilarating 20mins of my brief climbing career. Type 2 fun for sure – cursing and profanity all the way up with that little devil in my head telling me I can’t do it, then I can, then I can’t, only to come off belay absolutely desperate for more!

Nick J and I are at Queen’s Drive, a mixed climbing crag on the West Face of the Telecom Tower here in the Remarkables, Queenstown. We are on day 1 of a 2 day Ice and Mixed clinic, part of the Remarkables Ice & Mixed Festival. The event is the brainchild of the Expedition Climber’s Club, a club focussed on promoting and fostering the bleeding-edge of NZ mountaineering. Within this club lies the NZAT (NZ Alpine Team), which is essentially a mentoring programme to select and develop the very best talent NZ has to offer. I have followed the pursuits of these guys for some time and to be climbing alongside them under their guidance was really quite something.

So we find ourselves here, on a beautiful day climbing some rather challenging lines for a bunch of beginners. Mixed climbing, by definition, is the art of climbing on alpine “mountain” rock (and sometimes ice/snow) using axes and crampons. The axes are generally specialist, with a much more pronounced curve in the shaft when compared to standard walking axes (imagine the pain when you smash your knuckles on a rock when swinging or moving using a straight axe!) All the skills of rock climbing still stand – good axe placements mean nothing if you cannot control your balance and feet placement.

Every evening the attendees congregate at the Queenstown Events Centre in Frankton where presentations, dinner and beers are had amid a mass of expensive down jackets and beanies – you can spot a climber a mile off!

The second day was ice climbing, where the goal of heading vertical is the same, but this time we’re on frozen waterfall ice, where ice screws and Abakalov thread anchors are your friend. The location for this clinic was ‘Touchdown’, a small but epic spot on the shaded South Face of Single Cone, the tallest mountain in the Remarkables range. The walk in from the ski centre took 2.5 hours, following the Lake Alta track towards Wye Creek before breaking off and skirting around the steep bluffs of the South Ridge. As we climbed, the tourist helicopters circled overhead before landing on a flat ridge line some 1000m away from us. There was something very satisfying in knowing we get to see these views for free by using our own two legs and a lot of effort.

Ice climbing was just amazing. The art is to let the tools and the swing of your arms and legs do all the work. It’s not about brute force, but strong, bold moves. There’s no place here for delicately placing your crampons as you will literally slide off. You need to stab the ice with the front points – get both feet level, arms straight hanging your weight off the axes, then pushing up with your legs and locking off with one arm. Swing above your head, rinse, repeat. It’s tiring, but incredibly exciting. We climbed on a mix of WI (Water Ice) grade 2 – 3 (WI grades range roughly from 1 – 7). We were then shown how to place ice screws with a single hand (when leading on ice you never take both hands off the axes!), and building Abakalov thread anchors – which is the technique of drilling 2 holes at ~60 degree angles into the ice, and then threading a piece of cord through and tying off (or simply putting the rope straight through), to create a retrievable anchor to abseil off.

That evening we joined forces with Henry who had popped down for the weekend to have an adventure too. Sunday would be our free day and after all the climbing we had a hankering for some good old mountaineering. The Grand Traverse is considered one of the best alpine routes in the country, but after discussion, we all felt it was a little beyond us especially given the weather and conditions. Instead we chose a challenging but achievable alpine grade 2 route up the North East ridge of Single Cone.

We set off from Queenstown at 7:15am and hit the snow on the ski field at just after 8am. The walk up to Lake Alta is relatively easy, but best done early to avoid the onslaught of skiers/boarders coming down the slopes. It was overcast and slightly icy underfoot, with a moderate breeze from the South East. As we gained the saddle beneath the imposing Single Cone, the wind picked up, so much so that we stopped behind a rock and spent some time assessing our options. We made the decision to have a go, but opted for multiple layers and harnesses on from the start so that we were prepared to bail or pitch if we had to.

The start was easy enough but we were cautious – the guide book states “do not underestimate this nonchalant ridge”. After a stop in a cool little rock cave, we climbed higher and as we reached the crest of the ridge we were welcomed by a sheer 300m drop on the other side. This forced us to traverse some 100m left which required careful use of two tools. The snow pack was slushy which made stepping up very difficult in places. I had some fantastic shots of Henry and Nick climbing along the edge of the ridge, but unfortunately my GoPro froze over multiple times rendering half my footage useless. Just 80 vertical metres from the summit we reached the crux – a section of very thin snow/ice on sheer rock followed by a steep slope, where we stopped for some more decision making. The wind was constant but we were all feeling warm and strong. On any other day the 20-30m crux would have required pitching for sure. We decided however that breaking the rope out today would have been a hazard – there wasn’t enough rock to place nuts or cams effectively, and the snow was too soft for any kind of stake placement. Being roped together without protection on such a section would only have added to the risk. And given the relative steepness of this route we agreed it would be safer to finish the climb and descend the easier SE ridge than try to bail.

So on we went. The next 30m took some concentration and careful placement of feet and axes. We caressed our way up the step until with great relief we reached the mantle and stepped up onto wonderfully simple Alp1 terrain. Foot prints appeared from nowhere – we can only assume a group before us had ascended from the SE, taken a look at this ridge, and decided against it! The last 50m was a lovely walk and we were welcomed with a solitary rocky outcrop and pole marking the summit of Single Cone, the highest point in the Remarkables at 2319m… and a beautiful view of thick white cloud!

The descent down the SE ridge was straightforward apart from the first section at the summit, where a short and very exposed traverse of a 1m wide ridge line is required to reach a steep step leading into a thin couloir. Apparently there are anchor bolts here for abseiling, but damned if we could have found them under all the rime. We carefully down-climbed the section and after breaking out of the couloir enjoyed a steady descent following the steps of others all the way back to the saddle we had started from earlier in the day.

Upon seeing the frozen Lake Alta and the edge of the ski field, the sense of calm and relief began to set in. We stopped beneath a huge rock for lunch, and then carefully descended down into the ski field boundary, arriving back at the ski centre 5.5 hours after setting off. Whilst not a particularly long or hard route, the NE ridge is exposed, much more than I experienced on Tappy or Taranaki, and I think we were all grateful for a bit of clag hiding a lot of that! It’s a wonderful part of the country and a perfect stepping stone for aspiring alpinists looking to jump up into the Alp2 realms and look for something a little ‘gnarlier’. Failing that going up and down the more benign SE ridge would be the best alternative (though a rope would be recommended for either route).

Our evening was spent in Queenstown enjoying a few beers in front of whatever roaring fire places we could find. An exhilarating and inspiring weekend which showed us all just what is possible out there in the mountains, if you are careful and realistic with your abilities. See you all there in 2018!

You can find information about the festival at http://www.iceandmixedfestival.co.nz/

And if you are keen to see many more (fantastic) photos of the event, check out Lachlan Gardiner Photography on Facebook!