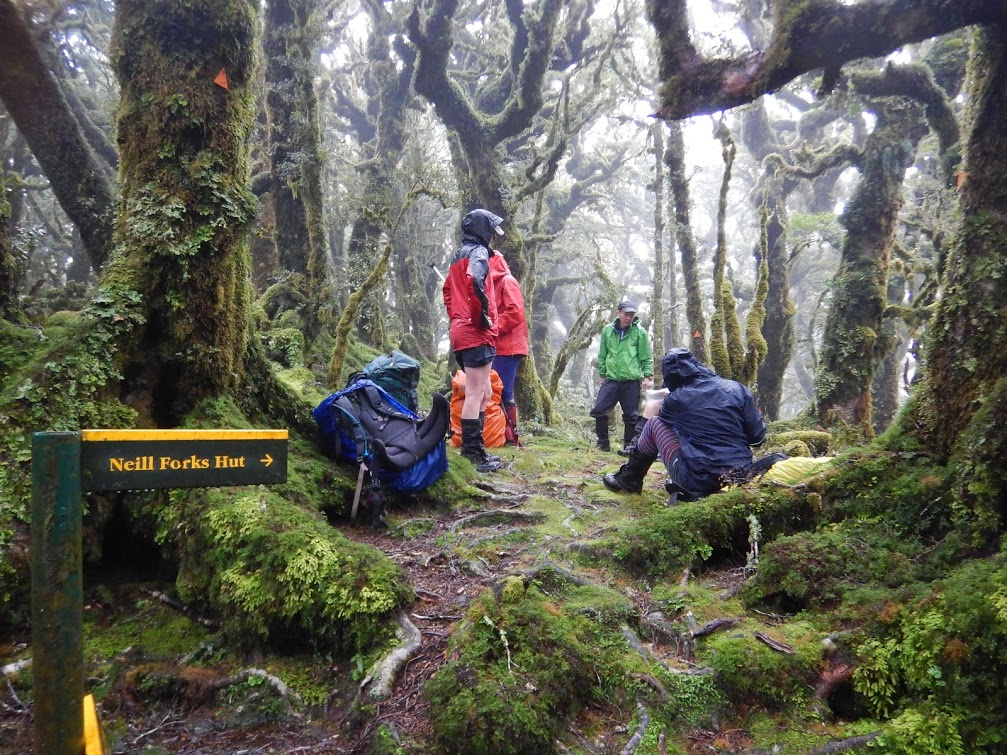 We set of from Waiohine Gorge road end on Friday night for Cone hut. Our original plan was to navigate to Jak Flats biv North of Mid-Waiohine hut but the heavy rain and wind forecast for Sunday wasn’t conducive to tops travel so we reshuffled it to Neill Forks via some navigation up from the Waiohine. Neill Forks is a hardy little NZFS hut nestled in the bush where the Hector river meets Neill Creek. It turns out Neill Forks is the place you go in the Tararuas when you feel like a bit of an adventure but don’t have the time or weather conditions that allow for something actually adventurous, it’s close enough to two road ends and doesn’t involve travel over 1100 meters, and when you’re there you feel as if you’re in the middle of the wilderness. We found out Jessie had been there 5 times in the last couple of years due to these circumstances.
The walk into Cone took about 2.5hrs in somewhat balmy conditions for mid August. The track ascending the first 300m was the steepest but in good nick, the later part along the ridge line was somewhat boggier – good for dismissing any illusions we had of keeping our boots dry this weekend. We made it to Cone and settled in for the night.
Saturday morning we set off at 7:30am for Cone Saddle in a slight drizzle that was to be the only precipitation that fell during our walk that day. We continued east along the Cone Saddle track down to the Waiohine and stopped for morning tea and a route planning chat at the bridge straddling Makaka creek. We planned to take an old route up Makaka Spur and had been told this veers off the main track just a few meters after crossing the bridge. Tony and Amanda took the lead and guided us up to spot point 386, I sat at the back and rather enjoyed the trip up and the lack of input  required from me. We continued heading North-west up the spur before getting to a very pronounced turn to the west at about 700m. An obvious place for a break, with good views. From here the animal/people trail was more obvious and had a lower gradient than what we’d previously climbed. We continued up until the route intersected with the marked Cone Ridge track. All up we had ascended 900m in about 3hrs. We had another rather delightful 30 minutes travel along the dwarfed beech forest tops before reaching the junction splitting off to Neill Forks. The track down to the hut was very steep and had a higher amount of treefell than seen elsewhere that day. We made it to the hut by 4pm, put the billy on and began collecting firewood. About an hour later we were forced inside when the downpour started.
We left the hut at 7:30am in rain, backtracking our path from the previous day, it was up hill straightaway. After several frustrating false summits we hit the junction and continued along Cone ridge towards Totara Flats hut. The rain eased and we made it to the hut around 10:30. After a very early lunch we set off for the Holdsworth Carpark via the old Totara Creek Track (DOC had closed the new one off). The track siddles the creek for an hour before veering up a spur to intersect the Gentle Annie Track. The upwards portion of the track strongly resembled a stream. Once we hit the Gentle Annie highway it was full speed down to the road end to meet the other groups.