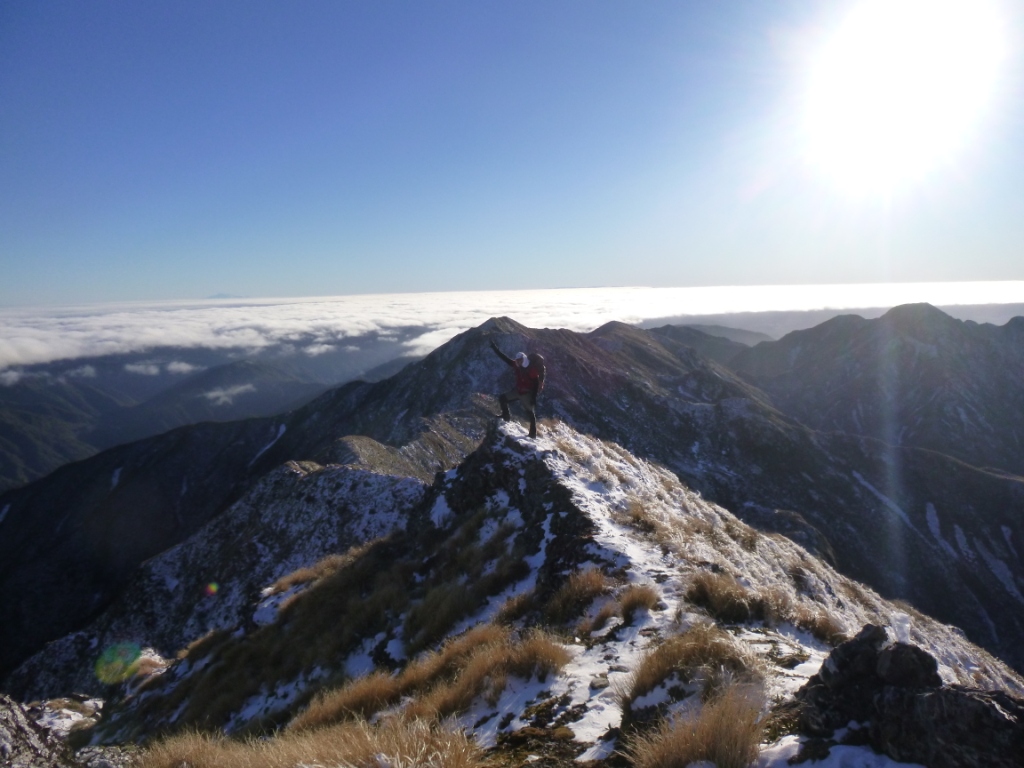 Tramping to Dundas Hut with a medium/fit group for my first WTMC trip isn’t the best decision I’ve made in my life.

I thought I was fit from running around hilly Wellington but the muddy, tree-root covered, relentless steep climbs and descents of the Tararuas made me feel like I’d never exercised in my life.

However, this isn’t a whinging report full of regrets.  Despite getting bad shin splints and ruining two toe nails, I had a fantastic time admiring phenomenal views with a wonderful bunch of new tramping buddies.

The weather forecast for the weekend was pretty dire as we powered up the hill to Roaring Stag Hut on Friday night. Gale force winds, low level snow and lows of -17 degrees Celsius were on the cards but we were happy to find a mere sprinkle of snow and light winds under the tree canopy.   Of course, it wouldn’t be the Tararuas without a good dose of mud and gnarly tree roots to climb over.

There was no need to rise early on Saturday as the plan was to tramp for five hours to Dundas Hut via Cattle Ridge Hut.  Around seven hours later, it was obvious this was no walk in the park. This leg was TOUGH – traipsing up hill, then downhill, then uphill again, through conditions varying from snow covered tussock to bashing through thick vegetation to climbing over trees that had fallen over the track.  A 40 minute “scenic detour” (e.g we got lost!) close to Raumahanga River sapped our spirits (well, for the five of us who went walkabouts) as the trip down to the river never seemed to end.   A positive was that the sun shone for most of the day and gale force winds didn’t eventuate.

Looking up at the loooonnnnngggg spur that led to Dundas Hut was intimidating. There wasn’t a lot of chat as we made our way up single file.  It was torture to spy the red roof of Dundas Hut below us because we still had to climb further before we could descend.

It was glorious to arrive at the hut but not so great to discover it felt like a freezer (there’s no fire here).  Tereza was quick to prepare dinner while the rest of us put on as many layers as possible.   What sounded like a possum at the door around 7pm turned out to be fellow WTMC member, Simon, who looked very happy to rest after a painful long journey in too-small boots.

After devouring a delicious dinner of chilli con carne, we were impressed when Tereza revealed a huge chocolate cake she’d baked.  Bellies full, we soon retired to bed to try to warm up.

Frozen boot laces and gaiters greeted us early on Sunday morning.  There were a few complaints of cold wet feet as we made our way up the icy hill.  When we reached the top of Dundas Ridge, we were treated to blue skies, a warm blazing sun and incredible views over to Mt Ruapehu, the ocean, and mist covered farmland.   The entire walk over the ridge presented almost summer like conditions so we lapped up stripping off our layers.

The ridge is where I crowned Gareth my “best friend”.  He offered me one of his walking poles after I grimaced in pain whenever I had to head downhill. Gareth deserves a medal for easing my discomfort, as well as for offering his boots to Simon (this gift was declined as they have the same boot size).

It wasn’t only Gareth who was thoughtful.   Everyone was keen to help each other from Jessie sharing his yummy snake lollies and Shay offering his fudge biscuits to those who shared painkillers and offered to carry gear.  I was impressed with the camaraderie considering most of us didn’t know each other.

A short stop at Herepai Hut around 230pm soared our spirits as we were now on the home stretch.  Some of us loaded up on ibuprofen and we set off (well, I hobbled).  We had an interesting meeting with a hunter who asked Dan to give a walkie-talkie to his wife and child who would soon follow him up the track.  We debated whether to wait (we didn’t know what time they were coming) or leave the walkie-talkie on a sign nearby.   Dan was in two minds about disobeying a hunter with a gun but we soon met up with the hunter’s family and all was good in the world.

We made it back to the van at Putara Road around 5pm, sunk into comfortable seats and headed home dreaming of warm plush beds.  Tereza surveyed the van for our trip highlights and lowlights: it was unanimous that the views from Dundas Ridge were the winner, while the hard slog up the last spur to Dundas Hut was the pits.  Despite thrashing my body, I’ll certainly be back to do more tramps with the club…just perhaps not a medium/fit trip!