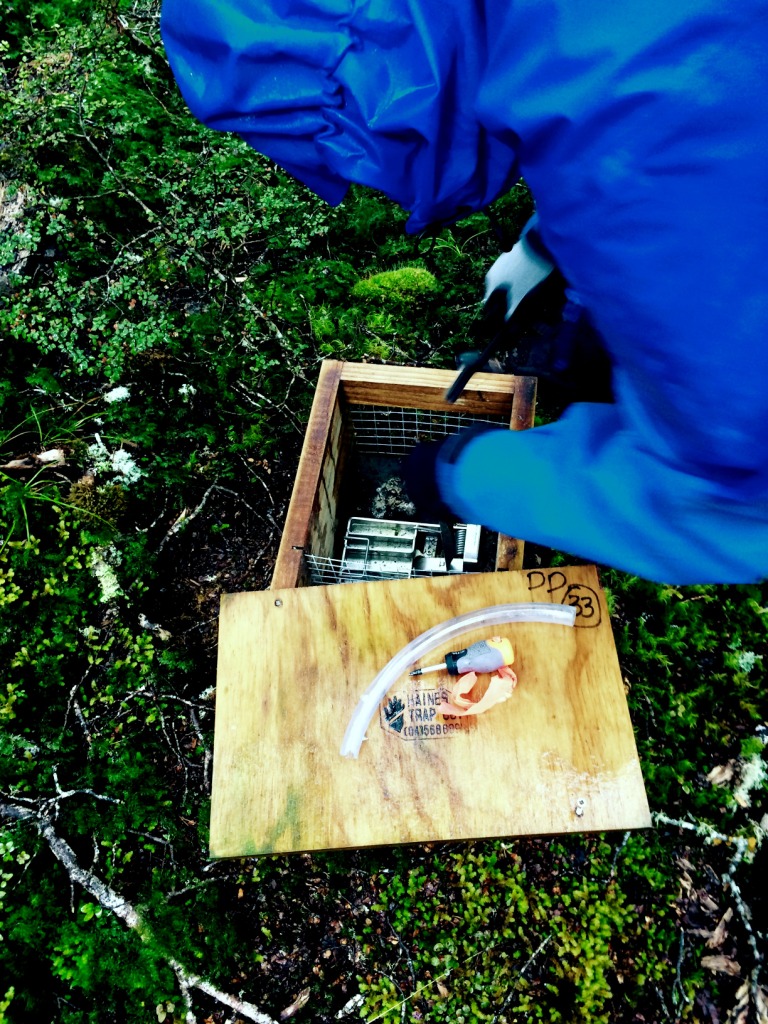 After a long drive on Friday and the usual kebab stop in Carterton, we parked at the Road End around 11pm. Within half an hour, four of us were enjoying a bunk in Sentry Box Hut, and the three others had their ground sheets and mats laid out on the floor. We also managed to fit one person from the MF group on the floor. There isn’t much space to camp around the hut, but two MF punters found place for a small fly, and the fourth and last MF punter slept in the van.

After a cold night and a quick breakfast, the MF group headed off. We distributed the trapping bags and baits amongst the EM group, and started heading up to the junction. 20 minutes in, Marieke wasn’t feeling so well, and Bram and her made the sound decision to return to Sentry Box Hut to rest for the weekend. Luckily they were both well organised and had emergency food with them, which made it easier to come up with a plan B. After a quick stop and some gear swapping, the five of us continued heading up. It was a bit cold and drizzling, but the track was steep, muddy and slippery, which kept us warm during the ascent. We reached the junction after about 2 and half hours, and stopped for a well-deserved snack.

We packed our lunches, trapping gear and PLB in small bags, and left our big packs at the junction. We headed North to check traps #35 down to #1, on a wet but flat track. After all gathering around the first trap to see how to rebait a trap, we split in groups: Kate and Barbara checked traps with uneven numbers, and Jaleel and Jane looked after even numbers. While the two groups were leapfrogging along the track, I navigated from one group to the next to make sure everyone still had all their fingers. After having rebaited all traps, we had a quick lunch and turned around to return to the junction.

We stopped again at the junction for a snack and to put our packs back on. The weather was still a bit average – no wind but a bit cold and light rain – so we decided to head straight to the hut for a cup of tea. After an hour of more mud and small ups and downs, we arrived at the lovely Parks Peak Hut. Within minutes we had changed into dry clothes, had the fire going and a hot drink in hand. The idea to go out again in the rain to rebait more traps quickly vanished. After the usual gear comparisons and tramping stories, we had dinner and were all in bed early.

We woke up to a thin layer of snow on the ground, which had already started melting. The hut kept the heat quite well, and it wasn’t too cold inside when we got up. It was still drizzling when we left the hut around 8am, and we split again in groups to check traps #55 down to #36. Within an hour we were back at the junction. We had accomplished our mission by rebaiting all 55 traps over the weekend. Old baits were often mouldy and needed replacing, but all traps were empty, which is great news for the birds.

As you would expect, the track down to the road end was still steep, still muddy, and still slippery. We slowly made our way down, and experimented a few creative ways to deal with the muddy slope, such as dancing with trees or bum sliding. We were back at Sentry Box Hut by 11:15am, where Marieke and Bram had had a quiet weekend and 16 hrs sleep.

Trap #1 back to Junction: 1h30 (no rebaiting but with quick lunch break)