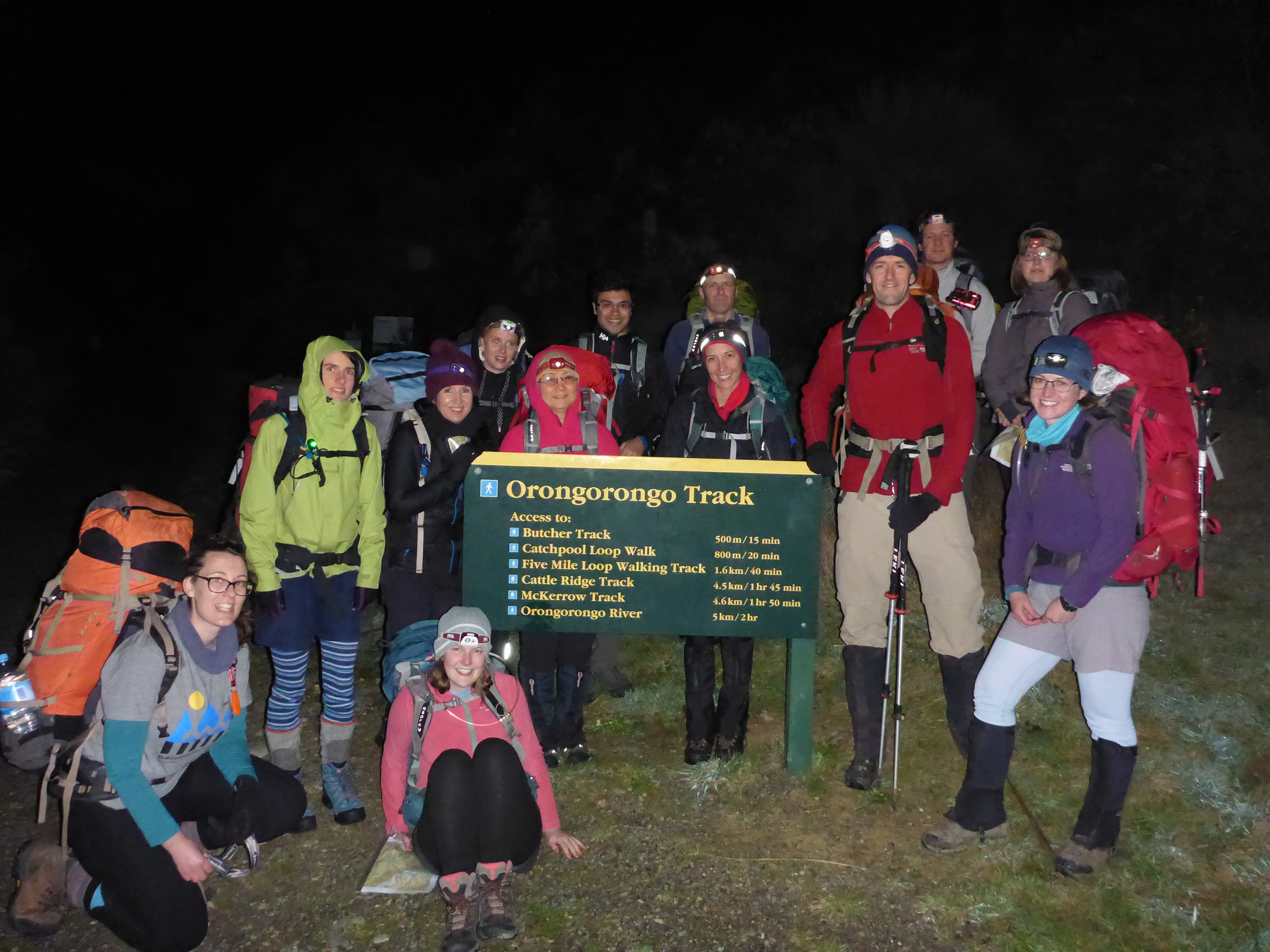 As the next step in my transformation from city slicker to baby bear grylls, I signed up to the Intermediate Bushcraft course run by Kevin, Richard, Matt, Emily and Bram on the weekend of 11-13 August 2017. I had high hopes for this course. Until that time, GPS devices were just cumbersome old-school mobile phones with bad graphics, my compass was just a fancy necklace accessory that swung in dangerous directions when I walked, and my “emergency kit” was simply to follow the person with the most gear around in the bush. Not only were these three assumptions proven false or unsafe, but I picked up numerous useful tidbits of information. The course consisted of two Wednesday evenings before club night discussing the theory of different bush skills, and a weekend component consisting of two nights in the Orongorongos putting theory into practice. The course perhaps was not enough to transform me into baby bear grylls (but I don’t think even the real bear grylls could do that), however it was enough to lift my skill level from near incompetence to almost common-sense bush-user.

Unfortunately I missed the first Wednesday session due to work commitments, and it seemed like this was the session that covered the good stuff – reading maps and using a compass (this would later prove a sticking point between myself and Kevin on another trip, as I insisted on minusing 22 from my bearing, with Kevin warning that I would lead us all off a cliff). We were also given a book on bushcraft with excellent, though comical, illustrations.

The second Wednesday session was led by Kevin and Matt. Kevin talked about trip planning, while Matt talked about different kinds of gear and how they are measured (I learned some pretty new words, such as “loft” and “lumens”). Matt also demonstrated his emergency kit, half of which I didn’t even carry in my “main kit” let alone my non-existent “emergency kit”! Kevin finished off the session by demonstrating some knots (which also had interesting names such as “truckers” and “siberia”).

The real fun was yet to come with the weekend session. This began on Friday evening when we all piled into the van and headed off towards the Catchpool Carpark. We stopped in Petone for some fish and chips – I can’t remember the name of the store – but be warned, their tomato sauce to chip ratio is severely over-estimated. We arrived at the carpark in the dark and began the faff-ful task of organising our gear. Someone suggested we number off, as at 15 people we were a large group and someone could easily get left behind. This proved rather difficult (including for the author), but in the end we had a consecutive string of numbers indicating that we were all present and ready to go.

We started at the Orongorongo Track where Kevin revealed his first trick – taking a group photo by the sign. To some of us, this was just Kevin capturing precious memories, but he later revealed that this was all about getting an electronic record both of the time the tramp started and of the information on the DOC sign. Then off we marched, one after the other, into the darkness of the Orongorongos.

The walk in was fun with lots of spotlights and people chatting. I have a feeling we disturbed many a morepork along the way. We walked to the arch bridge at the end of the Orongorongo Track and then (instead of crossing the river to Paua Hut as we had planned) we walked up the Big Bend track to Turere Lodge. This was because Kevin had concerns about the height of the river and perhaps the difficulty of leading a big group which included some novices across a river in the dark. I was glad we went to Turere Lodge – it meant dry boots for one more night!

The next morning was a classroom session with the leaders demonstrating their emergency kits. Richard won the most emergency gear competition but Kevin was a close second. Although last place wasn’t awarded, the fact that I did not have an “emergency kit” most likely put me there! Next Bram talked about means of communication in the bush, including PLB, mountain radio, and old-fashioned smoke signals. He passed around the mountain radio which was unusually heavy, and a PLB with a button that was very tempting to push. Richard then led a discussion about how to use a GPS. Although all leaders appeared to have the same brand, they were all a bit different which was confusing for a novice like me.  I did like the screen which displayed the GPS connecting to satellites, which looked like a space-invaders game. The last part of the classroom session was river-crossing. Kevin, Emily and Richard demonstrated the linking up method for crossing rivers, and we practiced linking up amongst ourselves. We also got to practice the caterpillar method for turning around (however this is not recommended by some).

After a lazy lunch at Turere Lodge, where we met fellow WTMC-er Tony and his mum out for a walk, we headed down to the Orongorongo River to practice our new river-crossing skills. The day was fine and the river was low, never going over the author’s knees – perfect practice conditions. We threw a stick in the water and made Tash chase it to see if the speed of the river was greater than walking pace. It almost was, but, as we learned, other factors like the clarity of the water and the depth also dictate whether you can cross. Kevin pointed out a shallow bit in the middle that got wider and wider as it went downstream, indicating that the river was going to split into two. This was a good bit to walk down. However we were here to challenge ourselves! So we linked up arms as we had been taught and strode straight across the river. It was very successful – no one fell in. I noticed that it definitely makes you feel more stable when you are holding other people while crossing.

The next session was to practice navigation. It was perhaps the most useful session of the weekend for me – as I am always keen to practice using the fancy tramping necklace. Our mission was to get to our campsite for the night (Grace’s Stream Campsite) by walking up part of the McKerrow track and, upon reaching a certain point, navigating down the spur to point 257, and beyond to meet up with the Orongorongo Track. We had enough experienced people that we could split into five groups – one experienced person and two newbies per group. Emily was our experienced person and Cindy and I were the newbies. It was awesome to have Emily there to talk to about different things we should consider when navigating, looking for clues as to where we were, and taking guesses at how much altitude we had climbed. We took rather longer than estimated to get to the junction spot where we turned off down the spur, but that is all part of navigating. You need time to stop and think (and in my case, catch my breath).

Going down the spur was much easier than expected. There is a really clear trail. While we still stopped to take guesses at where we were and to take a bearing, time was marching on and we needed to catch up with the other groups, as we were last. On this leg my fancy tramping necklace swung in front of my magnetized drinking tube, causing it to have a spasm and point in the wrong direction. Lesson learned: do not put your compass in front of a magnet. Although if you do, Bivouac will put it on their giant magnet and fix it for free! We caught up with the other groups just after point 257 and carried on as a big group, skipping over the river and joining the Orongorongo track. From there it was easy going – just following the signs and track until we came to Graces Stream campsite.

Finally, time for dinner and the news!

Bram set up the mountain radio to show us how it worked. He did a great job of stringing the arial out between the trees but unfortunately something went wrong and we didn’t get our 6.30pm news flash. So we stood around eating bags of potato chips instead – a very good alternative.

To be honest, I am not sure if making dinner was a teaching exercise, or a necessity, or both, but cooking for 15 people sure requires some skills. Some of us wiggled our way out of it by going back to the van for extra sleeping gear/food/water. But thankfully Emily and Tash took charge of the dinner and did an excellent job amongst the chaos of cheese, beans and potato flakes. I was very appreciative of the vege shephard’s pie that was produced – navigating makes you hungry!

Then came the piece de resistance – a chocolate cake cooked by Kevin in a billy. It also happened to be Mike’s birthday, so perhaps he should’ve got the cake to himself…but he is a caring sharing sort of fellow (he very kindly on more than one occassion gave up his “butt pad” for me), so the cake got split into 15 pieces so we could all have a taste!

After a good night’s sleep we were ready for day two. First on the list was building shelters. Matt had given us a quick demo the night before on how to put up the flies (which most of us then slept under). However a more sticky challenge was in store for us this morning – building emergency shelters from whatever we had in our packs and the natural materials around us. This was enormously fun, and as with everything creative, I got competitive. Jue, Marieke and I were in a group together and we emptied out our bags for all the bits of plastic contained therein – ground sheets, pack liners, drybags etc. Marieke then found an excellent big log split in two that we could string them over. We had a bit of trouble getting the plastic to stay, using rocks and big sticks to keep it in place. Jue and I then demonstrated our creation by cuddling up inside it on our sleeping mats. While the judges acknowledged that we had great colour and flair, they questioned the functionality of our shelter as apparently it was not waterproof (in my opinion, too much emphasis was put on this “waterproof” requirement). The other groups came up with equally marvelous creations. The leaders then demonstrated the range of emergency shelters that are available over the counter, from tent, to mushroom, to bivy bag, to Bram’s pretty awesome Bear Grylls-style bivy. 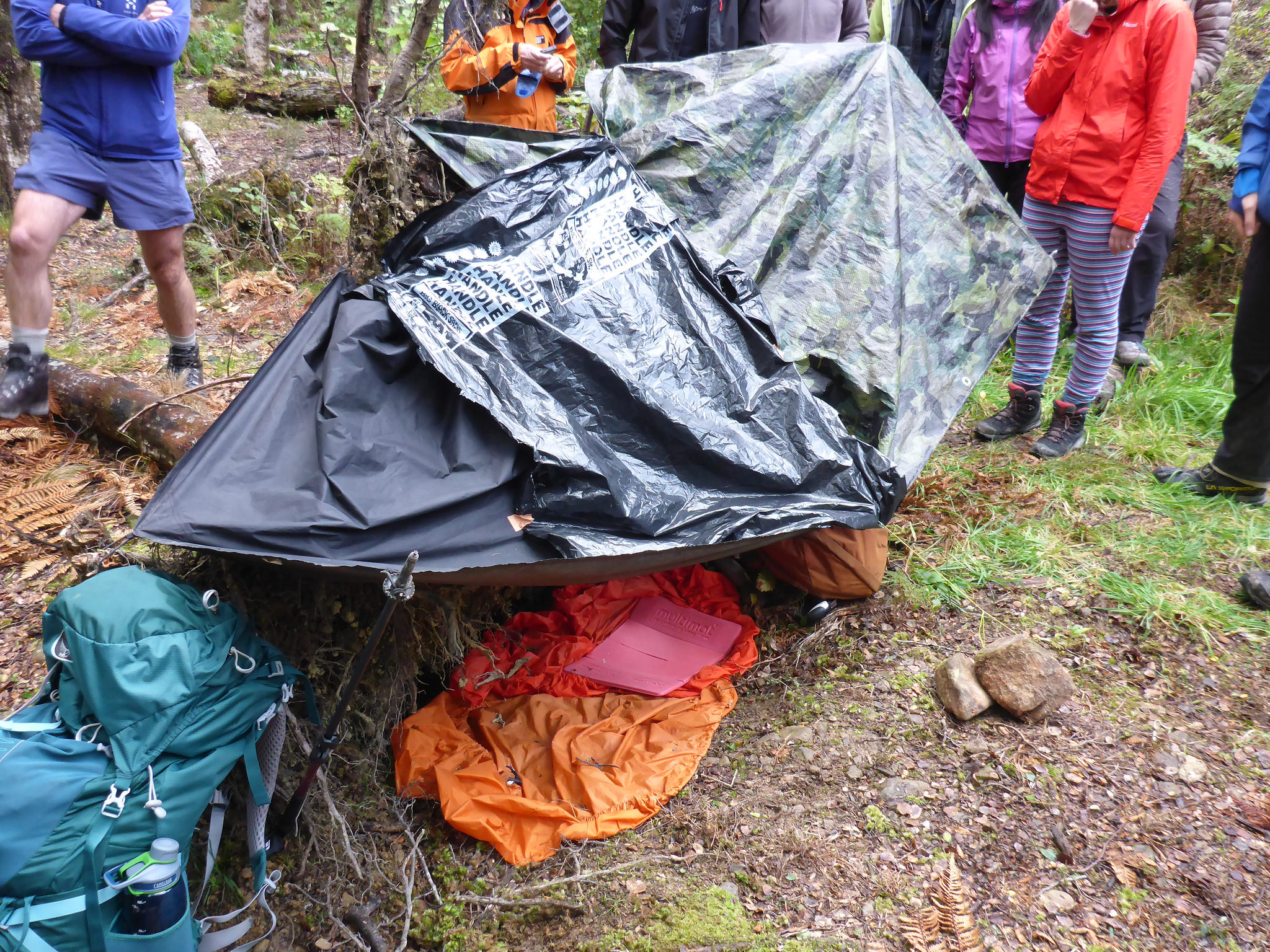 The late morning/afternoon sessions were about different methods of cooking, hygiene for food and water, responding to hypothermia and safety above the bushline. This was good because everyone had different experiences and chipped in with how they manage themselves in the bush. During these sessions the rain set in, so we gathered under a big fly that the leaders had set up, rather grateful that our temporary mountain shelters were well packed away in our bags! We were due to have one more activity, where we pretended someone was hypothermic and looked after them, however since we were all feeling a little bit hypothermic by this stage, we headed back to van. And wouldn’t you know it, when we got there, the sun came out.

A big thank you to Kevin, Matt, Richard, Emily and Bram who all helped to make the weekend possible and made sure that we stayed warm, dry, fed and walking on the right track. It was loads of fun, and would definitely recommend it for other newbie newbies like me!