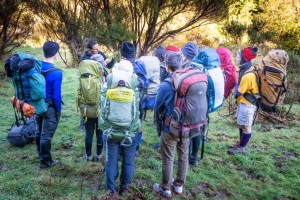 Sadly, for a NZer, I’m reasonably well informed given that I can name around 20 plant species, and identify quite a few of them. However, I wanted to be able to tell the difference between a couple of species by bark, given that these trees grow very tall, and leaves are not always visible. 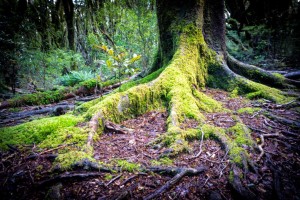 So, I signed up for Illona’s trip to Mitre Flats hut which became the trip to Roaring Stag. On a nice sunny day, 13 of us started walking. For 50 metres. I’ve walked with botanists before and dropped my pack, knowing we’d be in the one spot for a while, whereby Illona described the trip as being touchy-feely, and had us stroking manuka and kanuka. Manuka is Mean (slightly pricklier), whereas Kanuka is Kinder. By sight, most manuka have seeds all year round and approx the size of currants, whereas kanuka seeds are much smaller. We meandered on another 200 metres to a bridge, crossed it and got a lesson about hard beech and red beech… Red beech is the colour of Blood, and the shape of a circular saw, (which can make you bleed). Hard beech isn’t. Illona was full of these little ways to remember the similar but different things in our forest. 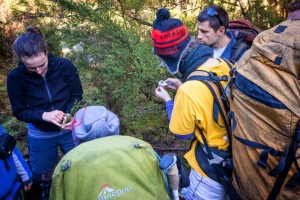 We went a bit further, still stopping several times to learn about tree ferns (do they have “skirts”?), mosses and liverworts and Illona had even brought a hand magnifier to look at their genitalia!

We then got tested on our knowledge of beeches as we slowly made our way up the hill (50% of the time is a pass, isn’t it?), and Illona pointing out the differences between rimu (with the big adults having topographical maps on their trunks), and kahikitea. 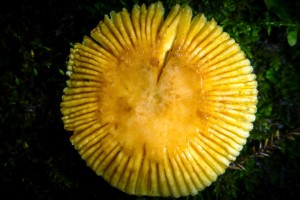 Picking up speed (downhill is great), until we got to the creek and close to the hut.

The hut was full to overflowing. Most of us were going to be sleeping outside, but in the meantime, we dined on entrees and simultaneously cooked up a storm. Next was the night adventure. I was knackered, having had a 5am start and decided that bed looked more inviting. The others donned torches and took binoculars, looking for spiders in the dark. Apparently they reflect blue-green at night. Tony managed to find a fresh water cray, and then he headed back to the road end for work the next day. 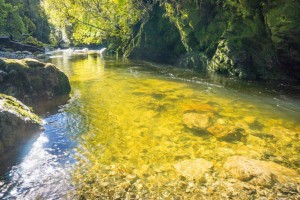 The rest of us attempted to sleep. I was toasty warm apart from my feet. I consoled myself with the thought that those in the hut would have had to cope with snorers. In the morning, I was decidedly horrified at the white stuff on the ground. Barbara described her feet as painfully numb and sore as the blood slowly seeped back into them. Illona (with whom I shared a tent), slept like a baby.

In the morning, Illona tried to give us a lesson between a matai and a miroleaf. Supposedly, the two bushes just “looked” different and you had to have the eyesight of a hawk to see the prickles on the ends of the matai leaf. I’m going to have to work harder at that one! 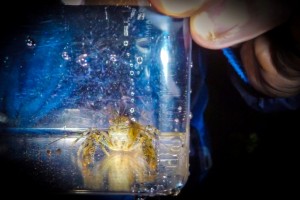 We retraced our steps back up the hill with our new-found knowledge and had a snack at the top. Poor Jane needed some painkillers and I convinced myself it was most likely a headache, potentially dehydration. She very politely pointed out that she didn’t think dehydration caused a sore knee… A couple of drugs later, and we headed relatively swiftly down to the swing bridge for a lunch stop.

This seemed a popular spot to meet people as they caught up with us from Herepai hut, and also hunters (and their many, many dogs) from the gorge below. The final stretch through tree fern, beech, manuka, kanuka (and mud!), and we were back at the van.

A huge thank you to Illona for putting in the time and effort in organising this trip. Can’t wait for the next one!