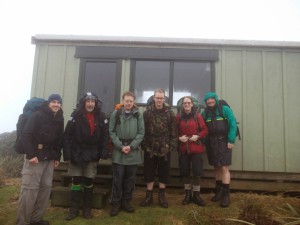 Craig had this to say about the weather:

I can confirm the presence of a Black Hole slightly to the west of Kapiti Island. It is the only feasible explanation, after tracking three fronts across the Tasman that suddenly parked themselves on top of kayaker until he quit. Points north and south continued to be hammered whilst it completely skipped the Tararuas. No-one should be told about this. They must continue to believe that it is always miserable in the Tararuas so we are able to keep this fine mountain range to ourselves for the benefit of the future adventures of the mighty Tongue & Meats*. Not only did the forecast prove to be incorrect, but the current observations from Saturday morning failed to reflect the reality at the road-end  which is proof that even professional meteorologists perpetuate the myth of miserable weather in the Tararuas. 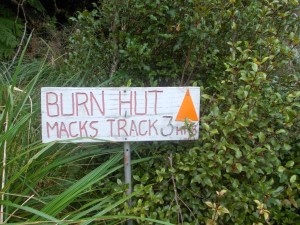 We started out from dam #1 and did a very quick march across  the top of the dam due to the rather cold wind. We had our first stream crossing less than 20 minutes later with some of us optimistically attempting to keep our boots dry for just a little longer while the hardy souls in the party just tramped straight through. We then continued to walk up the stream before turning off at Baber Forks to walk up College Creek.

The rocks were quite slippery so a certain amount of concentration was required to ensure we did not get an unexpected cold dunking. We reached the sign for Mack’s track that indicated our return to the bush track again around 1:30pm or so. From here it was an easy bush track up the hill that was a steady climb. Craig and I were happily acting as the tail end Charlie while reminiscing about previous trips we had done together and talking gear in between ultra biking and ultra running. 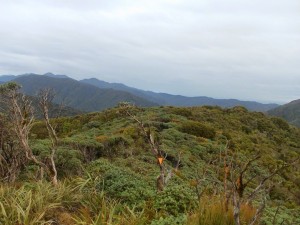 Some comments from Baz on the trip:

My first trek into the Tararuas with a quick introduction to Leatherwood and typical Tararua weather (or so I’m told). Burn hut was compact but well set out and evening tea included pudding with custard which was well beyond my expectations so well done Craig & Sarah.

We made it to the hut around 4:30pm. Steve was so happy to see the hut that he hugged it and perhaps started a new trend of hugging a hut instead of simply bagging it. Burn hut is an extremely nice little hut and seems like it is not used particularly much, despite being a freebie. The last people in the intentions book had been more than a month ago. 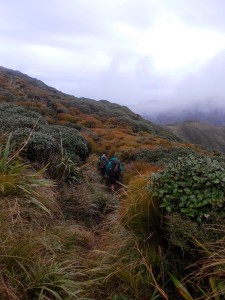 Everything went according to plan, with a great dinner of Cream Fraiche, pasta and sausages, until it was time to cook a dessert of custard. Unfortunately, both Craig and I had assumed each other would remember how to cook custard after an attempt a couple of years ago on another tramp and no recent practice. Realising that this assumption turned out to be just a little faulty, I designated this as an “emergency” and so with Burn Hut having cellphone reception (a hut having cellphone reception, what is this madness?!) I managed to download the WTMC cookbook on my phone and shout out some instructions. Unfortunately by now everyone was providing advice to help us successfully navigate through this “emergency” situation and Craig had to cook the Custard with six backseat chefs concurrently offering different instructions (and he did a very fine job!). At the same time we were all trying to solve the newspaper crossword. Now I must point out here that the custard was not burnt, but the pot was perhaps just a little burnt, but not the custard! Accompanied by apple rings and rhubarb it turned out to be a really good dessert and enjoyed by everyone to the point that it was all consumed. With the general hilarity that accompanied the cooking process, it turned out to be one of those really memorable nights on a tramp. 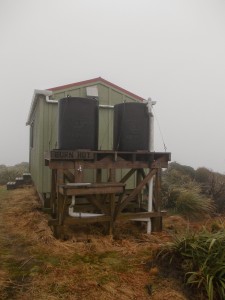 Sunday dawned with typical Tararua weather – low hanging clag, light showers and a cold wind. We took the track down to Dam #2 and we greatly enjoyed the birdlife in the valley as we were walking along. Once arriving at the dam, Mike, Teresa and I then trekked the 4km up the road to collect the van that had dutifully remained at dam#1

The final word comes from Steve who I thought put in an absolutely awesome effort on the tramp despite not feeling his best:

I enjoyed the fact that there was not much rain on the Saturday.

I enjoyed the company too.

I enjoyed seeing the hut appear out of the cloud and the fact that we had the hut to ourselves.

I enjoyed seeing the grassy clearing appear indicating the end of the tramp.”

*Tongue & Meats is a nickname for WTMC.