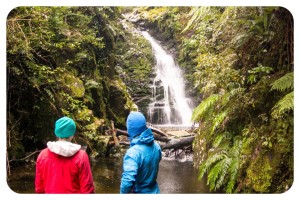 The trip plan promised much adventure  – Turere waterfall, off-track tramping, camping in the kiwizone to see kiwis, a fire at the solstice and possibly brunch in Petone. 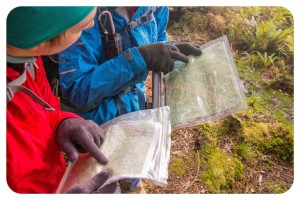 There was also a compulsory extra piece of gear on the gear list: an adventure hat! Since the forecast wasn’t particularly summery, I decided that my beanie would suffice as my adventure hat. It had already had a few adventures so was probably up for another one. I was a bit concerned when we picked up Tony because he was hatless – would this jinx our chances of having an adventure?

We set off up Clay Ridge at an adventurous medium pace and stopped to admire Mister Tree, a towering rimu that Tony had befriended on dog-running  days. With the wind getting more blustery, Tony gave us some cloud and weather instruction as we followed the ridge all the way to Mt McKerrow. We dropped into the bushes in the lee of the wind to have lunch and scan the map for the route to take down to Turere stream. It was quite cold so we all had on our adventure hats. 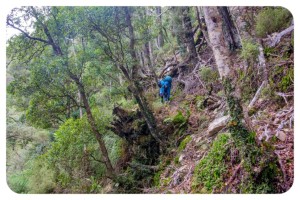 Despite this map-studying, we left the main ridge a bit early…just so we had a mini adventure to bush bash through rotten bush debris to our descent ridge. On it we found a well- travelled kiwi trackers path- not what we were expecting for our adventure. This ended around the 600m contour, so we took a small northern spur and descended quickly to the stream.  There was a deep pool to skirt round, so we climbed up and around it. Megan took  a different  route off this detour and we heard her land with a splash and a giggle in the stream. Tony and I avoided the wet re-entry. 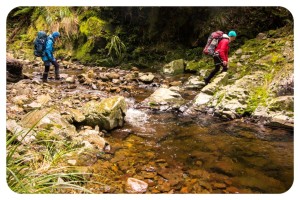 Soon we heard the waterfall and went to peek over the slippery edge…it looked dramatic and high. There was a log jammed above it, so potentially it could be abseiled. We climbed onto the true right bank above the waterfall and skirted around it for a few hundred meters, to pop out beneath it using a cunning descent found by Tony. The waterfall definitely had the wow factor, and a deepish looking pool at the bottom, so it would be a good summer swimmable adventure. 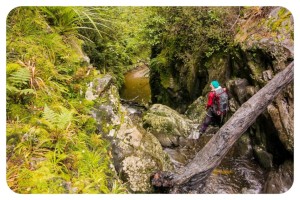 But now it was raining, so we set off up the sidestream and up the faint trail on the ridge on its true left to the Whakanui track. At the Whakanui track at 4pm, we guestimated the time it would take to get to Paua hut and set off down the slippery track. We all went for slides on this track, and Tony’s slide was well executed in the ear-first style but with a painful landing on a tree trunk. As we came onto the Orongorongo flats in the dark, we sighted the first kiwi for the night…a yellow wooden one welcoming us to the kiwi zone. So we took a photo just in case it was the only kiwi we encountered. 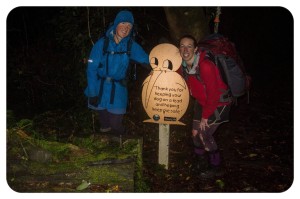 We meandered briskly down the Orongorongo valley, grateful that the rain had stopped. By 6:20, we were getting close to Paua hut as a procession of torches came towards us – Sarah (leader of the EM tramp) and Mike Gilbert (camped with friends near the hut) had come looking for us, just in case our adventure had become an epic.

Megan had decided to test the recipes in the club recipe book, so we cooked a bean dish with potato in the hut….ok, but not as exciting as desert sounded– S’mores, a new culinary adventure for me. We were a bit undecided about crashing Mikes party to cook our smores on his bonfire. After putting up our tents, temptation won. We joined Mikes group and a few of the EM group at the bonfire, feasting on smores and learning about all the delicacies that could be created with sticks, kransky, bacon and random ingredients like chocolate and marshmallows. Alcohol is an optional extra that may aid creativity or be useful as hand cleaner. You may find the recipes in the third edition of the WTMC cookbook. 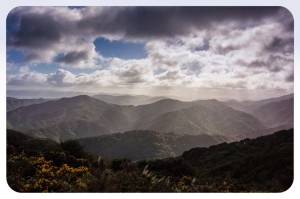 At the late hour of 9:45, despite the smoreful sugar high, I was tired. Soon I was sound asleep, dreaming of sqwaking kiwis.

At 7:30 Sunday, I woke to the sound of Sarah leading her group off to scale Mt Mathews. Megan asked me if I’d heard the kiwi sqwaking loudly just outside the tent during the night…no, only the one in my adventurous dream. 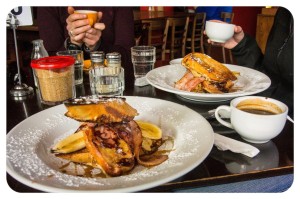 It was a bit drizzly and the last promised adventure of brunch in Petone was more appealing than a soggy scrub bash above Paua hut. After a leisurely breakfast we headed off to Cattle Ridge for a short walk back to the van and a short drive to refuel with French toast with maple syrup. After brunch we regretfully took off our adventure hats and headed back to Wellington.