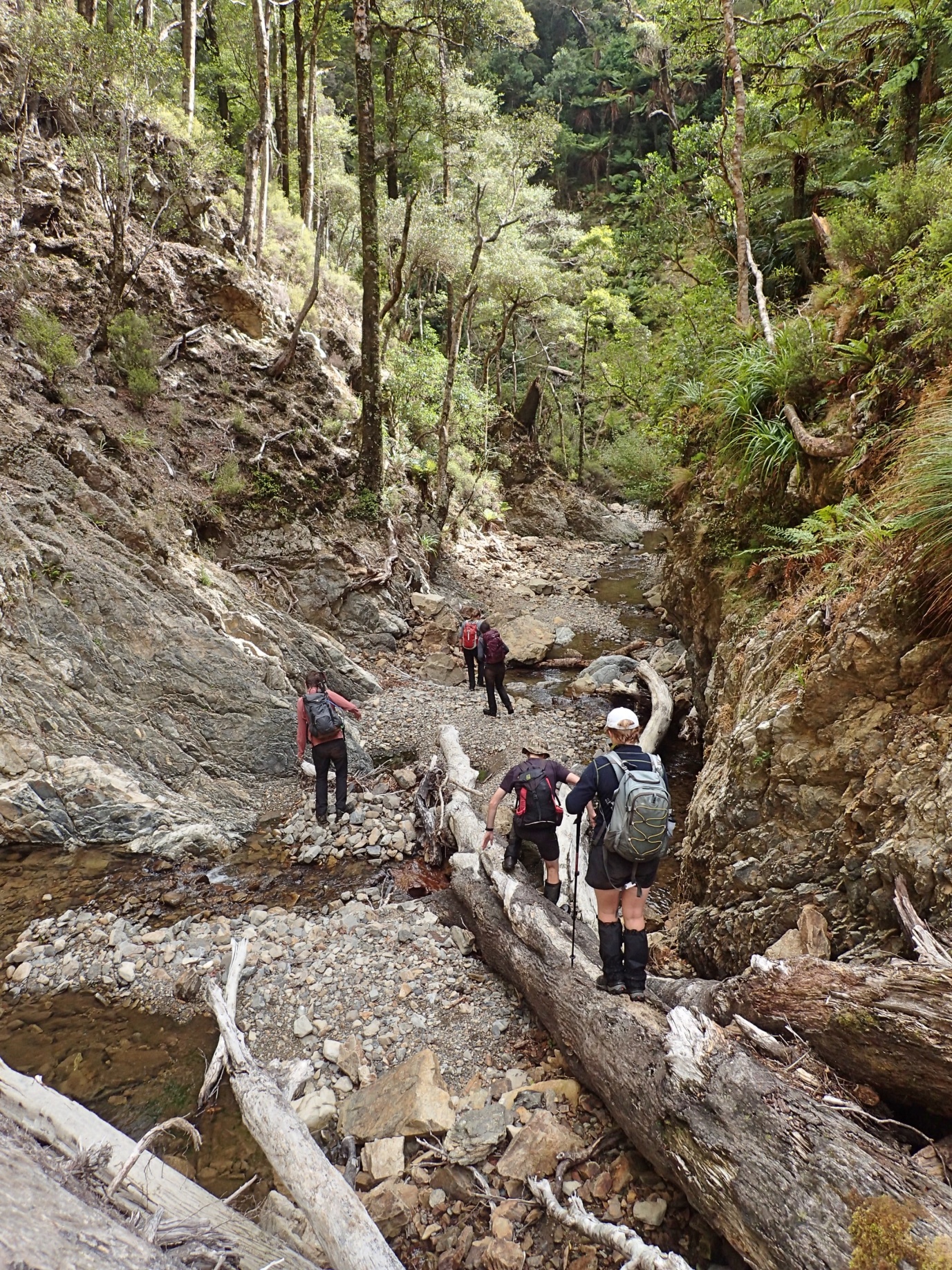 Matt had put a huge amount of work into organizing bushcraft but unfortunately the uncertainty with the rapidly changing Covid-19 situation meant the planned course could not go ahead.  Instead Matt proposed a day trip of navigation, route finding and river travel in the Remutaka Forest Park.

Eight of us set off from the Catchpool carpark and headed over the Orongorongo track.  There was a great deal of discussion about Covid-19 and Meredith pointed out that who of us could have imagined a month ago that we would all know so much (or would have heard so much) about Covid-19.  It was interesting to hear how everyone was coping with the uncertainty.  Some people were already working from home (this was the weekend before the countrywide lockdown).

We soon reached the Orongorongo river and had morning tea.  There were other people in the valley making the most of the outdoors in the uncertain times.  After morning tea we travelled along the Big Bend track for a while looking for landmarks that Matt had pointed out to us on the map.  At the correct spot we headed up a spur onto Turere Ridge.  We started to use the map and compass and some people started to learn how to take and follow bearings.

Once on the ridge we consulted our maps again, took bearings and started walking north-east towards point 497 on the Whakanui track.  We swapped point duties as we went so most people had a chance to practice their route finding.  There is good travel along Turere Ridge through open bush and over gently undulating terrain.

After some time we emerged onto the Whakanui track where we had a quick snack and consulted maps again.  Matt’s plan was to follow an obvious spur (obvious on the map) from the Whakanui Track down to a waterfall in the Turere Stream.  We found the correct place to begin our descent but almost immediately veered off the spur.  The spur was not particularly obvious as we descended and we found ourselves descending steeply and having to use the trees in places to hold onto.  It was difficult to see the spur (a common problem when descending) but we kept heading downwards and after a bit of a scramble emerged into the Turere Stream riverbed.

We had missed the waterfall but after lunch in the sun we travelled a few hundred metres upstream to see the waterfall which is quite impressive and about 10 metres high.  There was a pool at the bottom of the waterfall and I was tempted to have a quick dip but chickened out.

We then turned around and began our journey downstream.  Turere Stream is narrow in places with deep pools.  There were logs jams to negotiate and large boulders in places to clamber down.

It was slow going in places but we enjoyed the challenge of finding the easiest and driest route.  I had travelled down Turere Stream (and we ended up camping on a flattish spot) many years ago but could only remember that I had really enjoyed the previous trip.

I did get a dip in the stream in the end.  A slight slip in a gorgy section meant I went up to my chest in the water.  The others passed their packs to me and scrambled around the edge of the stream and stayed much drier.

As we travelled downstream we spotted a couple of goats and some pigs.  There was also a dead deer in the stream.  We had discussed earlier how it is generally safe to drink water from rivers and streams in New Zealand – we just have to hope that any toxins are well diluted by the time we drink the water.

After a few hours of travel we reached Turere bridge at about 6pm.  As we started back along the Orongorongo track we realized that we had not discussed or even thought about Covid-19 for a few hours.  Focusing on the river travel had taken all of our concentration.  Tramping is very good therapy and allows us to forget for a while some of the cares of the world.

In the end we had a longer day than expected but we had travelled quite a distance.  We had fine weather and good company plus the lovely stream and bush.  This was therefore a fitting way for club trips to finish for a while.

Thanks to Matt for organizing and leading such an enjoyable trip.  Let’s hope we can all get back into the outdoors again soon for more fun trips.