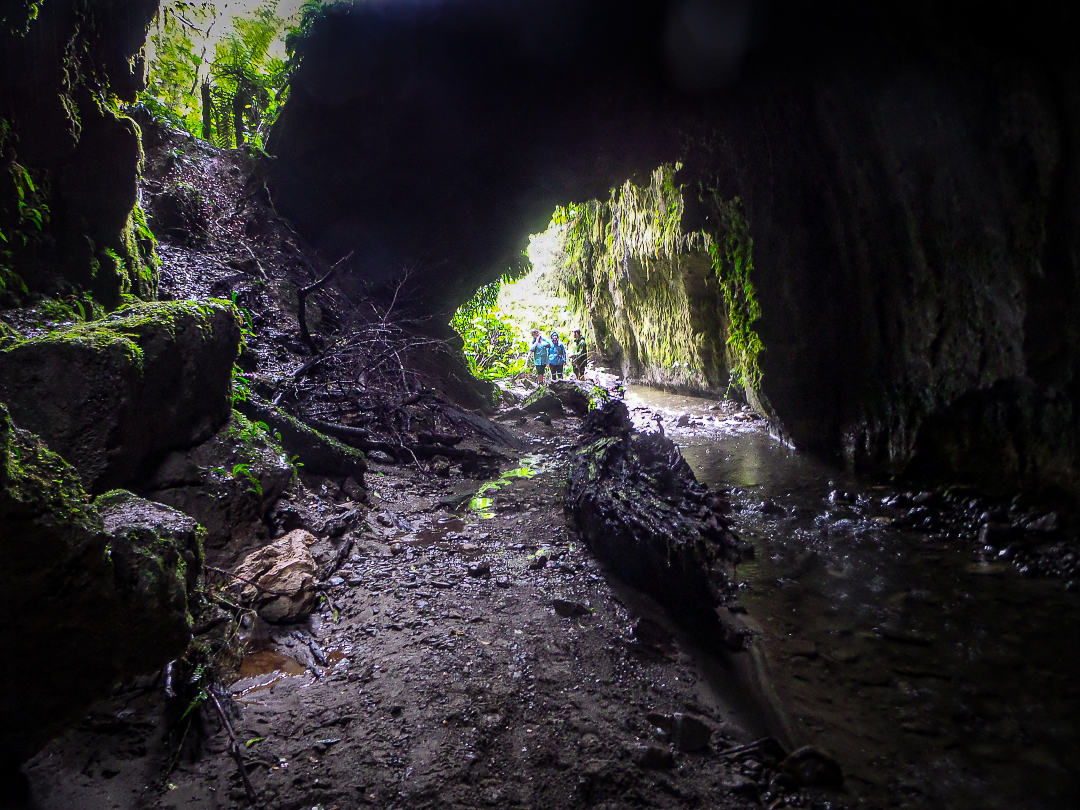 Six left from the railway station at 8 am on Saturday morning. After a mid-morning stop at the Church Café at Sanson—the hot chocolates (two) impressed—we turned off toward Feilding and drove via Apiti to the Petersons Road end where Malcolm was waiting in the car park to join us. I enjoyed the drive into the hinterland—an area I’ve never been to before—through rolling farmland and bush, with mountain views.

The track to the lodge was in good condition apart from some rather large, muddy slips toward the start. It took a leisurely 30 to 40 minutes to reach the lodge. After a quick lunch break we headed off to walk up to the Tunupō trig. A sign told us it would take around 3 hours to the trig. The trig track follows a ridge through forest and ends at about 1300m. The peak, Tunupō, is higher up at 1568m. We knew we didn’t have enough time to get to the trig and back before nightfall so we turned back at about 3.30 pm. Higher up were patches of remnant snow—a few snowballs got lobbed on the way down.

The original lodge burnt down in 2005 and was rebuilt in 2007 by the NZ Deerstalkers’ Association. The lodge is a ‘standard’ hut which sleeps eight and is nicely built and well laid out. There’s a separate bunkroom for NZDA members only but the woodburner is on the public side.

Dinner was a hearty chicken (or chickpea) and vegetable korma with rice. After dinner, our initial plan was to walk back out to the van and drive to take a look at some nearby glow worm caves. But the state of the slips made us reconsider, and so we put it off until the morning. Marshmallows were toasted over the fire (thanks Reuben!) and chocolate and biscuits shared.

Once the dishes were out of the way we embarked on two games of Down the River, Up the River with many screams of laughter and cries of anguish, swearing and table pounding.

In the morning our walk out included a detour to the Oroua River where Georgi and Reuben bravely took a quick dip. Back at the van we stayed in our tramping gear and drove along Limestone Road to begin the walk to the glow worm cave.

But once we got down to the stream (Cone Creek) the track ended. First we tried following the stream to the left but the stream bed was choked with debris and there was no sign of a track. We turned back and walked upstream. This route still meant quite a lot of clambering over banks and boulders and sloshing through the stream. Although we felt a bit uncertain about whether it was worth continuing, we pushed on and lo and behold—a cave entrance—and light on the far side. The water was less than knee deep in most parts but head torches were handy to help judge water depth. A stream of water cascaded down through a gap in the cave roof. We spotted a few glow worms towards the far end, up high on the rock face. Possibly there’d be more to see at night but I wouldn’t fancy tackling that route in the dark. According to the roadside sign this is a 600 m loop track. We continued along the stream, hoping to find the track proper but eventually decided to err on the side of caution and backtracked to our starting point.

After farewelling Malcolm we headed for home. Another stop at the same Sanson café—this time four hot chocolates.