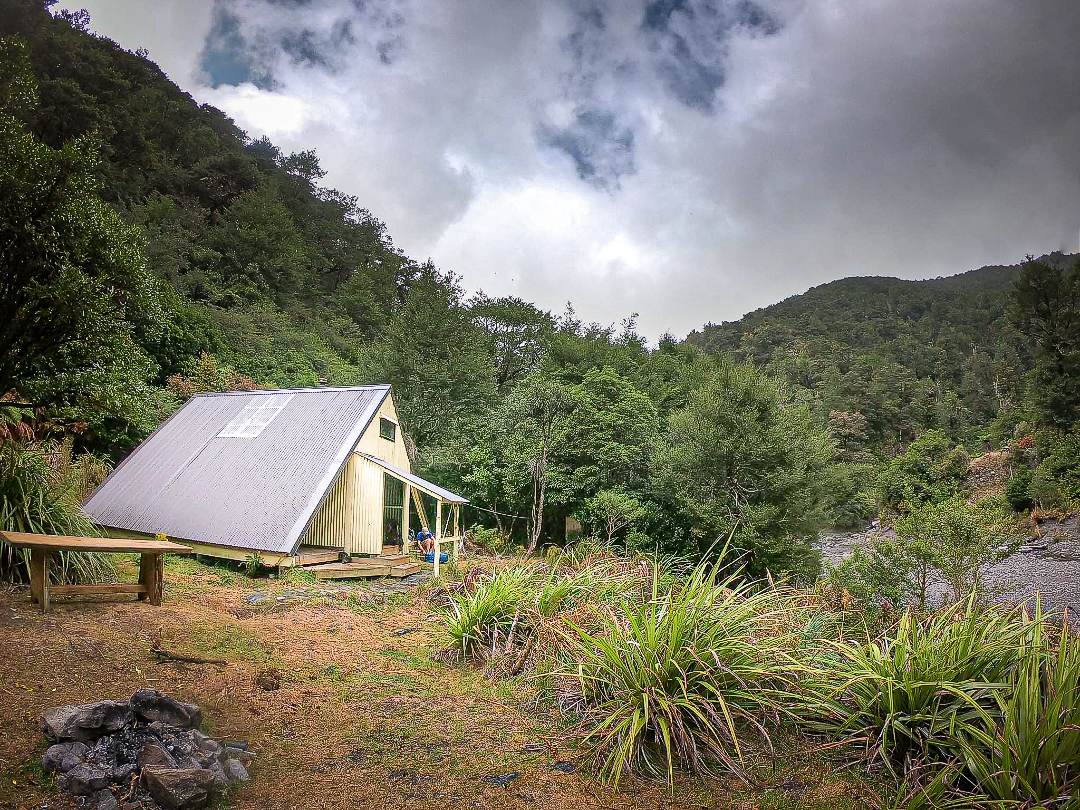 After an eventful Friday night camping which combined fire warning sirens and some local dance music playing at 4-5 am—both of which I managed to sleep through—things were going pretty awesomely on my first trip with the club.

We were dropped off at the Daphne Hut car park and we picked up the trail behind the information sign. The route had warned that there were several river crossings to start, however, it quickly became apparent that in the dry weather we could step over the ‘rivers’ without even having to use any of the stepping stones that were perched in the dry river bed. After the river crossing the trail is well marked and winds up quite steeply out of the valley. It was well-trodden and in the dry weather sections of it had become quite dusty and the valley really did act as a bit of a heat trap—make sure you carry a fair amount of water with you as well as in the scrubland it was much warmer than down in the carpark. On the plus side the low scrubland means that as you climb you are greeted by cracking views looking east.

The change from low scrub to bushland happened really quickly as we approached around 850 m elevation—one moment you’re gazing back at the views along the valley as we tried to grab our breath and I grabbed my fourth snack in an hour—and the next you’re fully closed in and surrounded by the mosses and roots of the forest. Thankfully here the path was really well trodden, without being too uneven or tangled with roots and so we made really good time up to the summit and three way intersection.

The path intersection is clear and marked with big wooden signposts that point across to Longview Hut (well worth a walk—we did it on day two) and then also along the ridge NE to Daphne Hut. It took around 2 hours to reach this point which consisted of around 1½ hours of walking at a steady rate and half an hour of rest

From here we headed NE where the trail follows the ridgeline. For the first kilometer the trail was relatively gentle downwards and we were able to make good time. We had my personal highlight of the trip—sandwiches featuring three types of cured meat, salad, chutney and swiss cheese—just before the pathway became a little steeper. It became apparent that while the trees were blocking many of the views at this point—actually they were also blocking a lot of the bad weather and we could see and hear them swaying as we ate.

As things began to drop a little more steeply there were a couple of more gaps in the treeline which we were told would have beautiful views looking up the NW valley—we got some awesome pictures of hair being blown all over the place but the views (which lived up to what we’d been told) we wouldn’t see until tomorrow when we came back up this direction.

At 8 km from the start and just over 2½ km from the summit and signs, the pathway becomes a lot steeper as we dropped down to the river. In areas we had to use hands to grab on to tree roots to descend as well. You’ll also hear the river long before you see it as you drop down the final section of the decent. The bottom of the valley by the river is fairly flat. To the immediate left is a smaller river and then the main river leading to the hut directly in front of us. If you’re heading to Daphne Hut straight away don’t accidentally take the smaller tributary—there is a sign on the opposite bank with which way to go but it was well overgrown.

We dumped our bags and headed up the smaller of the two rivers to try and find a waterfall written about in a previous trip report. Initially we were able to walk bank to bank and avoid getting too wet but gradually as we went deeper the valley became more of a narrow ravine and wading was unavoidable. In a couple of places there were sudden plunge pools that we had to ballet dance and rock climb round the sides of to avoid swimming. Eventually we reached a point where a giant tree had blocked the way ahead. Sad time—no waterfall—but on the plus side we saw a hefty eel in the final plunge pool. At this point we figured it was time to head back to the bags and so made our way down the stream again.

At this point we started to head up the main river towards Daphne Hut. We could see that this route would be impassable if the river was high as even in drought we were ankle deep most of the way up and crossing all over to avoid the faster flowing areas and slippery-as-hell rocks. Following up the valley was one of the most beautiful areas of the trip and really provided a great contrast to the ridge and bush of earlier in the day. Daphne Hut itself remains completely hidden until you’re right next to it. You’ll tell you’re almost there as to the left (as you’re heading upstream) another river joins with a signed path up to Daphne Spur. The hut is literally hidden behind the trees to the right of you. All in all took 15 mins from the base of the descent.

Daphne Hut was my first proper stay in a NZ mountain hut and I was super impressed—this place was better kept than many of the houses I’ve lived in. Clean and tidy, stocked with coffee, cleaning supplies (washing up liquid etc.) and even an air freshener in the toilet. There were mouse traps out but even so a couple of us who left bags open over night found that some of our food bags had been chewed through by mice—best to keep all food in your backpack where it’s a little harder to get. After chatting to some local hunters we figured the water was drinkable without boiling and so from then on were all good to drink straight from the stream.

The next morning we headed back down the river towards where we had descended and climbed straight back up to the cross roads at the summit where we had paused the day before. This time the weather was much clearer and so we managed to get stunning views along the valleys the whole way along the ridge line. At the crossroads we headed towards Longview Hut. The sign stated 45 minutes along the ridge however at a reasonable pace it took us nearer 1 hour and 45. This section included a little bushwhacking, but the ridge is so well worn that in sections there is almost a path present. Worth making sure you give yourself a little extra time if heading across. After following the path down it quickly changes from forest to shrubland and the views around you completely open up, lowland to the SE and mountains to the NW.

Longview Hut itself was pretty gorgeous. You could tell that in bad weather the wind would have swept up the mountainside and rattled everything about—so much so that the hut has quite literally been bolted down (see photo). After grabbing some grub, we realized we were running on the late side to rendezvous back at the van and so picked up our bags and shot off down.

The trail we picked up was just back the way we came heading ESE. The trail itself was a beautiful little ridge line descending down—in some places relatively exposed with a couple of large rocky drops before coming out to the bottom of Kashmir Rd, thoroughly sweaty and day dreaming of ice cream.

All in all a great round trip, some beautiful views, two huts bagged, and what’s more, some damn good sandwiches.