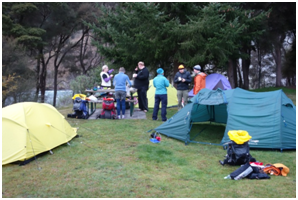 The first (and biggest) problem of the trip happened a month before it took place: the farmer would not give us permission to cross his land so we no longer had access to the track to Purity Hut. This called for Plan B, and after some research, Kevin Cole, who was leading the medium trip to the same road end, suggested Rangiwahia. Problem solved and the tramp was on again.

So on the 18th June four of us met at platform 9 along with the medium party and set off. We had a dinner stop at Bulls and then camped in cold but calm conditions at Mangaweka. 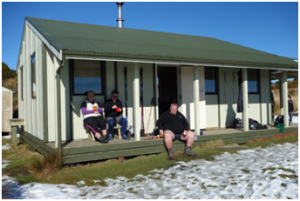 On Saturday it was fine and clear; we had won the weather forecasting jackpot! We drove to the road end and then set off along the track to the hut. The walk was great and the track has been re-cut to provide easy graded access over the top of the slip. The sun was shining and the view was fantastic – a panorama looking over the central North Island to Ruapehu and Taranaki in the distance. The view got better as we climbed the track and got into the snow. A tricky few metres where the track had iced over and then we arrived at Rangiwahia hut. 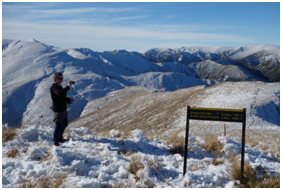 Now for a brew-up but the taps were dry because the water in the tank had frozen solid. Well snow is just frozen water, so the billy was soon boiling and we were able to relax with hot drinks while enjoying the sunshine and the view.

After lunch we organised a division of duties; Joleen offered to keep the fire going and adding more snow to the billies so we would have enough water for dinner. The rest of us wanted to walk further along the track to make the most of the weather.

We got to the ridge-line in good time, and did I mention the view? However there were clouds appearing over the main range and the wind was picking up so we did not stay too long. We retraced our path back to the hut for dinner and conversation. 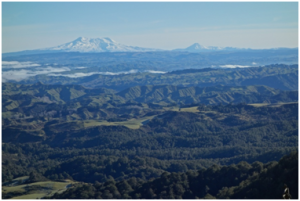 In the evening the wind grew stronger and it started raining. It was a good feeling to be inside a warm hut and in due course everyone was in their sleeping bags and ‘sound’ asleep. In the morning the weather was worse, still raining, but at least there was now water in the tank. We had plenty of time before we were due at the van so Barry joined some of the others in the hut in playing Settlers of Cataan. After he showed everyone how to play by winning convincingly, it was time for us to put on our wet weather gear and head back.

The walk down to the van was uneventful; heads down to avoid the rain and no view. The time passed quickly and we were soon getting back into our civvy clothes. The medium party arrived soon afterwards and it was back to Wellington.