Roaring Stag Hut had been described to me as a typical Tararuas tramp and a staple on the WTMC tramping schedule, so as a fully -fledged member now I thought it was one that I must do.

The tramp started at 9.00am on Saturday morning at the Railway station. Ten of us piled into the van and the last two were picked up on the way through Upper Hutt. We arrived at Putara Road End, not far North of Mount Bruce Bird Reserve, at about 11.30am. The cloud and intermittent showers, which we began the tramp under were to accompany us for the whole weekend.

As someone who is keen to learn about navigation, I had looked at the topo map prior to the tramp (as well as printing out numerous useless copies for my far more experienced co-trampers), making a mental note of features to look out for, so I could tick them off as we passed them. However the suction mud and splashy puddles distracted me, as they always do, so my timings below are very approximate.

The start of the tramp was muddy and bumpy. The first swing bridge was about ten minutes from the carpark. It only allowed one person at a time, and with a large easy grade group in front of us, as well as our own even larger group, it probably took a good 20 minutes for us all to get across. We then followed the “undulating” track on the left bank of the Mangatainoka River for about 45 minutes, coming across a “Tararua Park” sign at the halfway point of this stretch. Next was an even larger, single person swing bridge. At this point it was decided that people should keep going once they crossed the bridge to keep warm, rather than bunching up on the other side to wait for others, so our group began to split. 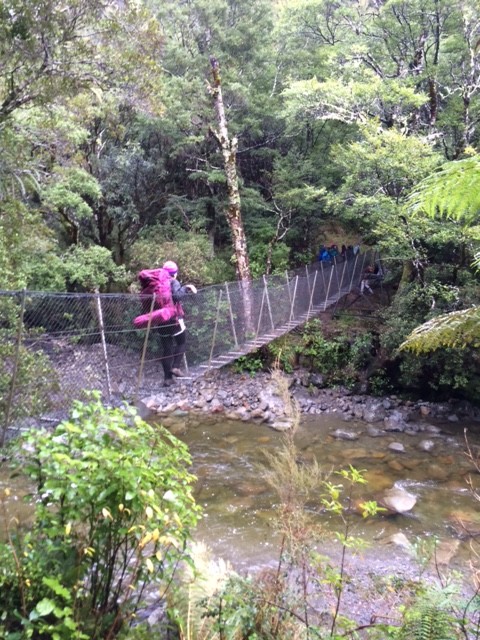 The next obstacle was a big hill of about 300-400 meters. It was quite steep for the first 20 minutes or so but then became somewhat gentler. For us casual people at the back of the pack this hill took about an hour, but the speedy ones may have done it in half an hour. We had a quick bite to eat at the junction to Herepai/Roaring Stag. My lingering memory of this point is big drops of rain making my marmite sandwich soggy.

The next section to the Hut was correctly labeled at about 1.5 – 2 hours. The track was very flat, but there were still plenty of mud puddles and rooty steps.  After about an hour we started a gentle descent down to Ruapae River. Then following about 30-40 minutes  of down hill there were four “river-crossings” (possibly two wouldn’t qualify as rivers, but my boots got wet so I’m counting them). The last two were definitely river crossings, because we had to climb down to cross them and then back up quite steeply. After completing this, the red roof of the hut popped up through the trees in front of us. 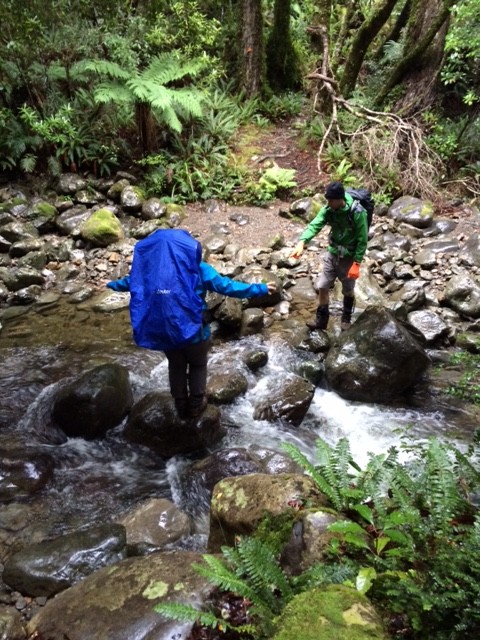 Roaring Stag is a very modern 12 bunk hut. The sink and tap were outside on the deck. I am not sure if it was tank water or river water, but we had no trouble with supply. Our unofficial host for the evening was a man who had spent about 5 weeks at Roaring Stag trapping possums. It also happened that his son and nephew had come in that day to take out his possum fur and bring him supplies. He had lots of good chat, telling us how to catch possums and cracking out his radio at 6pm for the news. Our other hut mates were a large group of hunters who arrived after us, and who likely resented us for dibsing the remaining bunks. But first in first served! 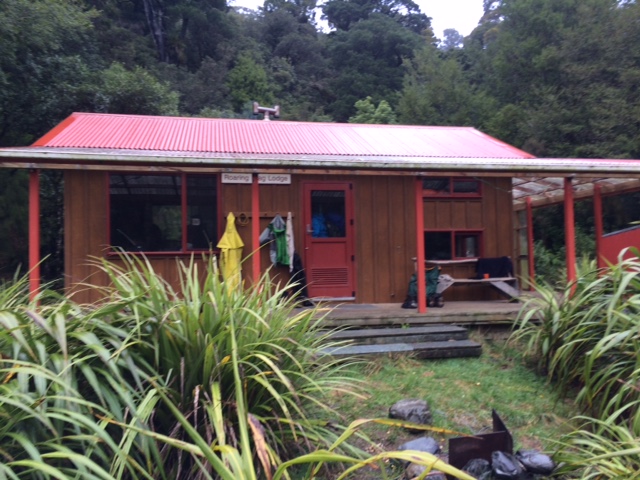 This was my first time organizing dinner. We had vegetable tortillas from the recipie book as a main, and date cake and custard  for dessert, with cream courtesy of Maarten. It seemed to go off without a hitch, and with lots of offers of help and encouraging comments about doing a good job, we all ate on time and no one went hungry. I felt very accomplished, especially when the custard thickened. I feel an appearance on Masterchef New Zealand is on the cards! 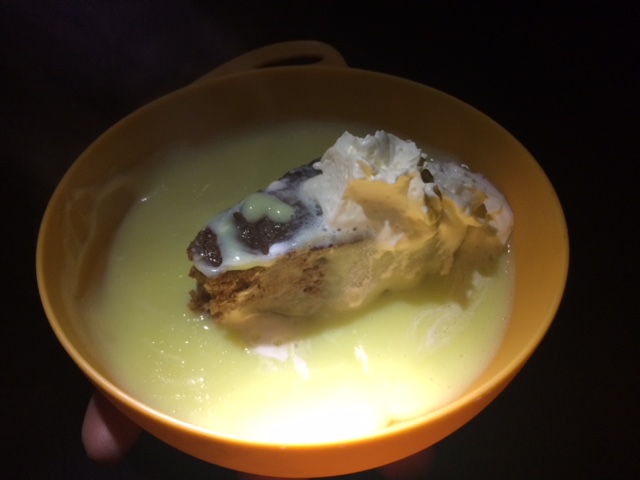 The hut was deliciously warm in the night, and I couldn’t help feeling a bit sorry for the hunters we had ousted sleeping out on the deck. But luckily they had an alcohol blanket to keep them warm!

The next morning, half of our group got up at 7am to do an extra walk to Cattle Creek Hut. I was not in this group so I am unsure how it went, apart from the general comment that it was steep and muddy. But judging from how close together the squiggly orange lines are on the map, I would say that steep and muddy would be an understatement! However our fit half proved themselves very fit, making it up and back to Roaring Stag in about 2 ½ hours. The rest of us casual trampers started the return journey to the van at 9 am. We all regrouped at the van at about 1.30pm, in time for a coffee at the Mount Bruce Bird Reserve on the way home.

Another lovely weekend away, despite the weather! Good company, and good custard.