The rain on Friday night gave us an excuse for a very leisurely Saturday morning start to the tramp. We met at the Railway Station at 7.30am, and stopped for breakfast and a coffee at the Wild Oats Café in Masterton around 9am. So it wasn’t until 10.10am that we were at the Holdsworth road end with packs on ready to go. Unfortunately the rain had decided to reappear, although it was gentle.

From Holdsworth we took the gravel path known as the “Gentle Annie” track up to a viewing platform known as Rocky Lookout. We made pretty good time, getting up in 50 minutes, although I was sweating profusely under my wet weather gear at this point. The gradient of Gentle Annie may be gentle by Tararua standards, but it will still help you get a sweat up. The cloud was low and we couldn’t see too much from the lookout.

After some time to cool off, we kept heading along the much flatter, but still very well maintained track, for 45 minutes until the junction where Totara Creek Track branches off the main Holdsworth loop. We stopped again to regroup and discuss how my pants were now wetter on the inside than they were on the outside.

We stepped out onto the Totara Creek Track and straight into some Tararua mud. I had to laugh at how the stark the change in track was – from lovely level gravel to typical Tararua roots and mush. From this point on the track is mostly down hill (with a small bit of uphill about a third of the way along). Bram was carrying a GPS and teased us with the allure of a “clearing” where we could stop for lunch. However the clearing was really just some less dense bush. I couldn’t wait to stop and get out of my sweaty overtrousers, but in my eagerness to get them off they got stuck on my boots and the group took the opportunity to get some silly pictures of me!

After half an hour for lunch with the wings of whirring Kereru (or Tree Turkeys as Andrei calls them!) for company, we kept on.  After maybe half an hour there was quite a steep section of downhill. But the ground was nice and spongey so it wasn’t too hard on the legs. We crossed a flat wooden bridge and Bram stopped to get a photo of us in action. After maybe 20 minutes more walking we crossed another swing bridge with a limit of 5 people at a time. By this time I was getting a bit tired and looking forward to the hut, so I scurried along the rest of the track as fast as my legs would carry me. I got excited when I spotted the hut through the trees, and went even faster. Then we struck the last mega-bridge. This was another swing bridge across a very wide stretch of Waiohine River. Only one person at a time could cross. With a rather large group of 11 it took some time for us all to get across. After this it was a mere 100 meters to Totara Flats Hut. The section from the turn-off to the hut took us approximately 3 hours (not including our half hour for lunch). 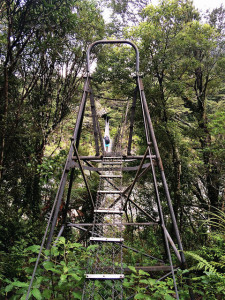 My first port of call was the Waiohine River to cool off. However I only managed one speedy dunk because the water was so cold.

Totara Flats is a modern 26 bunk hut with a wood burner, woodshed and even an axe for cutting wood. There was a pulley contraption type thing for hanging wet clothes on, and plenty of bench and table space. The bunks are in two rooms; 8 bunks in the smaller front room and 16 in the larger back room. And of course two standard long drops.

A large portion of the group were still feeling adventurous and made the 45 minute trip further down the Waiohine River to Sayer Hut, however I could not be coaxed to leave the safety of the hut on this occasion. Instead I stayed to welcome our hut companions for the night – a family with two little boys of 6 and 9 (ish) each carrying their own small backpack, with sleeping bag and one toy inside. The elder sat down beside me, pulled his boots off and proceeded to show me how wrinkly and white his feet had gotten! 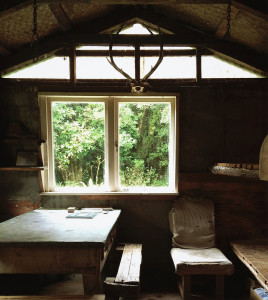 After the return of the adventurous bunch from Sayer Hut, Bram and Marieke tried to show Caryl and I a new card game. Andrei got dinner ready for the whole group, which was a delicious vegetarian shepherds pie (no disrespect to my previous tramping companions/chiefs, but this pie was the best thing I have ever tasted in the bush). We chatted over some sweets before heading to bed. At this point I have to thank Wei min for sleeping outside, getting himself wet, and getting up to catch all my gear which blew off the deck and into the bush! Thanks Wei min!

Our walk out was the reverse of our walk in. We left at 8.45am (I had not adopted day light savings yet) and arrived at the turnoff at 12pm. We were slightly slower as we had to tramp up the steep bits we came down yesterday.  Lunch took 20 minutes at the turn off before the cold wind motivated us to keep going. We emerged out of the bush in dribs and drabs around 1.45pm (still on pre-daylight savings time). This meant we could squeeze in another obligatory stop at the Wild Oats café on the way home!

A big thank you to Caryl for leading this trip. I understand it was her first as a leader and she did an amazing job of looking out for us all!