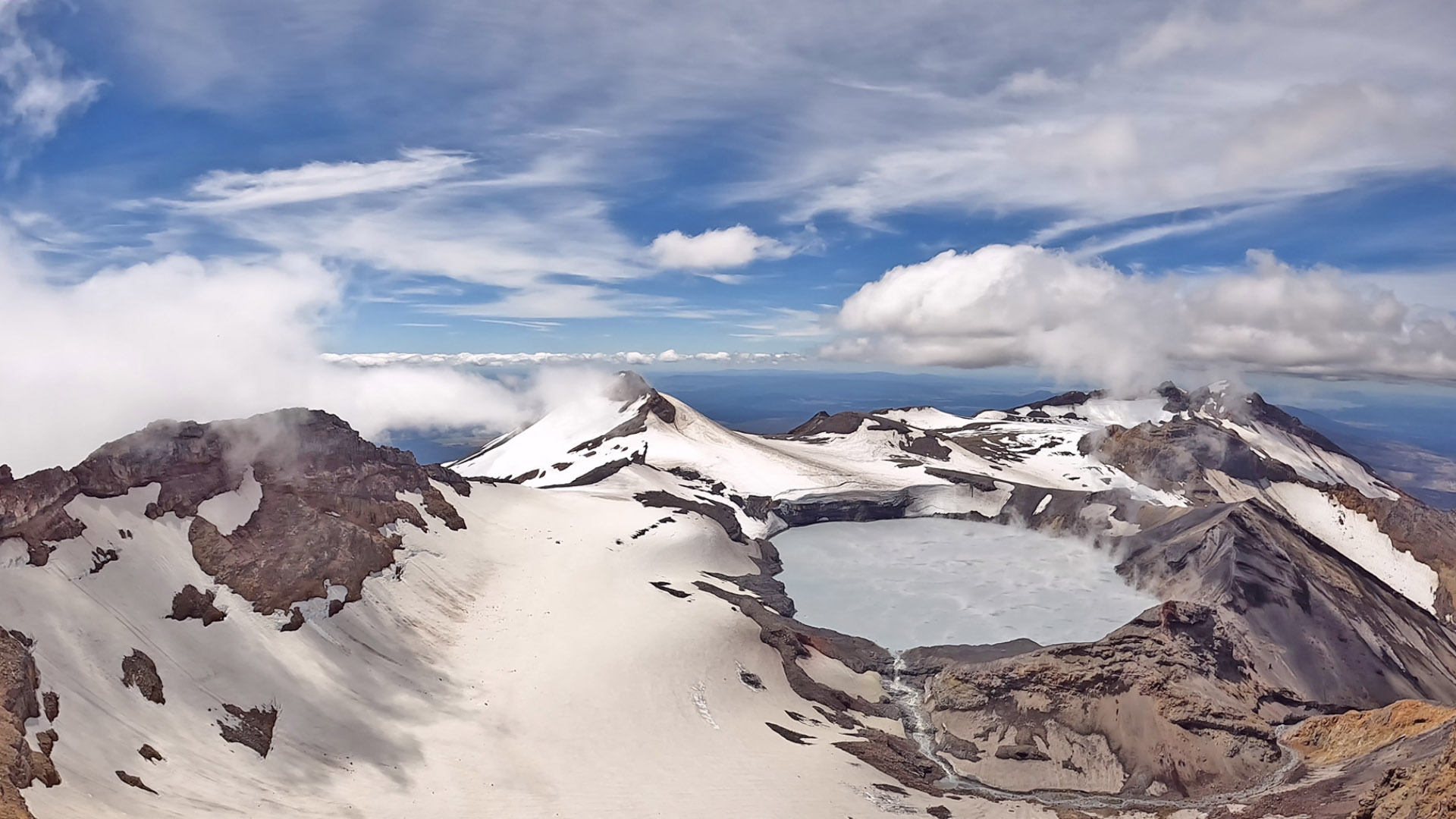 We had a great drive up to the WTMC lodge on Friday night, discussing our favourite tramping trips, travel destinations, and Bluey episodes (definitely Dance Mode). On arrival we met lodge leader Murray, who entertained us throughout the weekend with his stories of how tramping used to be in the good old days. In short: the packs were heavy, but the sausages were plentiful.

After a night of luxury in the lodge we set off the following morning around 8:30am. We worked our way up the four-wheel drive track, through the ski fields, past all the other lodges, and arrived at the top of the gondola. The weather was glorious and offered great views of Taranaki and Ngauruhoe.

We fuelled up on snacks and chatted about which way to go next. A lone tramper and a family of four had headed off west towards Restful Ridge, but we decided to stick with our plan to follow the T-bar up Knoll Ridge. At the top of the T-bar, we stopped again to plot our course. Murray had advised us to keep to the left of the snow leading up to Glacier Knob, so we headed off in that direction. We had to divert around some icy snow patches and back-track near the top where the slope got too steep. This bit was a proper struggle. Everyone behind us headed further east before coming back along the ridge. On reflection we probably should have headed that way too, or stayed closer to the snow.

We stopped at Glacier Knob for a breather, and then stopped again for lunch just below Summit Plateau. After that, the scenery got even more spectacular as we headed up alongside the plateau towards Dome.

We reached the top of Dome around 2pm and lingered to take some photos of the lake. The clouds were beginning to roll in a bit, but we still got great views over to the Desert Road and beyond.

We decided to head back down a different way, via Restful Ridge. The descent was relatively easy: we hopped down the big boulders then surfed down the scree. The scree would have made it difficult going up this route, so I’m glad we went the way we did.

We got back to the top of the gondola just as the café was closing, scuppering our hopes of coffee and ice cream. Chocolate cake was waiting for us back at the lodge though, so we sprinted down the final leg and made it back around 5pm. It took us eight and a half hours in total, although about half an hour of that was spent back-tracking under Glacier Knob.

Dinner was Spaghetti Bolognese, followed by more tales from Murray and watching the sun set behind Taranaki.