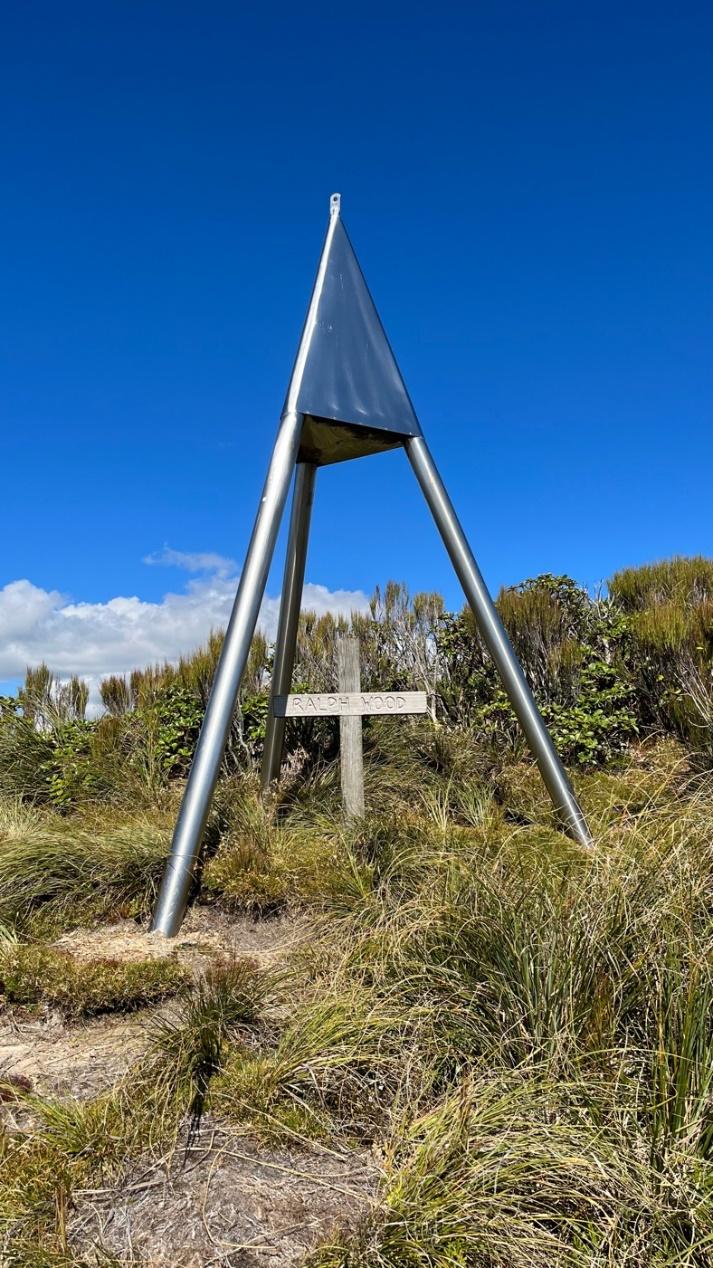 Saturday 5th March – Enjoying the sun along the tops

We had an awesome trip away to Te Matawai Hut in the Tararuas. I had never been into the Poads Road entrance of the Tararuas before so was keen to see some new tracks. Six of us (across a Medium, and Medium-Fit group) set off at a pleasant time of 7.30am Saturday morning from the usual spot at the Railway station. At about 9.30am, after checking the signboard, we headed off, the MF group trekking off into the distance ahead. They were heading off to Dracophyllum Biv – I was not envious of the distance they would be travelling!

After about 15 minutes travelling across the farmland, we started trekking up the hill heading towards Waiopehu Hut. We had gorgeous weather and I was particularly grateful for the shade as we climbed the hill. We stopped for lunch at Bush Corner after having climbed about 500 meters in the last 3 hours –  this went surprisingly quickly as we nattered along. We also had the MF group pass us at this point as they had taken a wrong turn at the beginning and had headed up the Ohau gorge track. Not long after our lunch break, we then came across the old Waiopehu hut site. Less than 1km from here, we popped out of the tree line and could finally see some views! In the distance we could also make out the “new” Waiopehu hut nested in the bush. At 2.30pm we arrived at the hut, we soaked up the views and had a quick water and sunblock stop as we still had a decent way to go. I also found the hut’s ‘boot cleaning station’ fairly amusing especially as we saw practically no mud, but I imagine in winter it would be notorious.

After the hut, we had two short hills to climb up – Waiopehu and then Twin Peaks. On the top of Twin Peaks, there was quite a neat memorial beacon. We took a few minutes to admire it before heading down into the saddle and then trekking up to Richard’s Knob. I was quite glad to get to this point, because I knew most of the climbing was now over, especially because it was getting quite hot up on the ridge as there was barely a wisp of wind. After a snack at Richard’s Knob, we began our 300m descent to Butcher Saddle.

Getting back into the bush was quite refreshing, we were all still feeling quite good at this point, so were strongly considering adding on some alternative options to our trip. One of these included heading up to Pukematawai either tonight or tomorrow morning, as we’d heard from someone that we had passed earlier that it was only a 45-minute trek from the hut without packs. We got to the Yates track junction, and from here the DOC sign said it was only a further 30 minutes or so (which turned out to be accurate). Arriving at the hut at 6pm (one hour after the MF group), we looked up at Pukematawai and decided that was something that would likely take more than an hour and a half return and decided to think about climbing it the next morning.

We had a delicious meal of couscous, chorizo and courgette from the WTMC cookbook generously prepared by Matt. We then chatted and relaxed before heading to bed right when the sun set. We were the only ones in the hut, so we all doubled the mattresses – this was the first time I’d tried this and would recommend it if you have the opportunity.

We decided to sleep in and noticed that the Main Range was in the clouds – there would be no views if we climbed Pukematawai. In the morning we left the hut at a leisurely 9.30am, fully expecting the MF group to catch up to us when we were heading up to Richard’s Knob. We did also consider heading down to South Ohau and walk out the Ohau river but avoided this because we had heard of a slip and couldn’t confirm the location (plus I wasn’t particularly keen on getting wet!). After less than 2 hours, we had boosted up to Richard’s Knob and had a quick snack, quite happy with the knowledge that we had done most of our climbing for today.

Today it was a bit more overcast (but still humid), so it was quite pleasant walking back down along Gable End Ridge. We also had some good views for most of the length of the ridge which was quite different from yesterday where we were in the bush the whole time. There were a few more boggy patches on this ridge with fewer boardwalks, so I can imagine this section being quite muddy after rain! We continued along the ridge until just past Gable End where we stopped for lunch around mid-day.

After lunch we had a steep descent of about 600 meters over the next few kilometers. I pitied Te Araroa walkers who would trek up this way. The downhill was getting quite monotonous, and a few of us (myself included) had a little slide on the dry leaves. Just when we thought we would never see the MF group or the end of the hill, we came across both right about the same time! We met up with the group and had a little chat at the Ohau river junction, discovering that they had enjoyed Dracophyllum Biv but had arrived and left in darkness. Following up the river, we came across the slip detour, which had us heading steeply up the Six Discs Track for a few minutes before heading to the right and scrambling over the top of the slipped section, before a sharp descent.

Once we’d passed this section, it was nice and flat for the last hour as we followed the river around. We arrived back at the van around 4pm and after redistributing some gear we headed off south back to Wellington.

Thanks to Matt (and Jamie our original leader) for organizing an awesome tramp! It was great to explore a new section of the Tararua Forest Park and to tramp with such a great group.