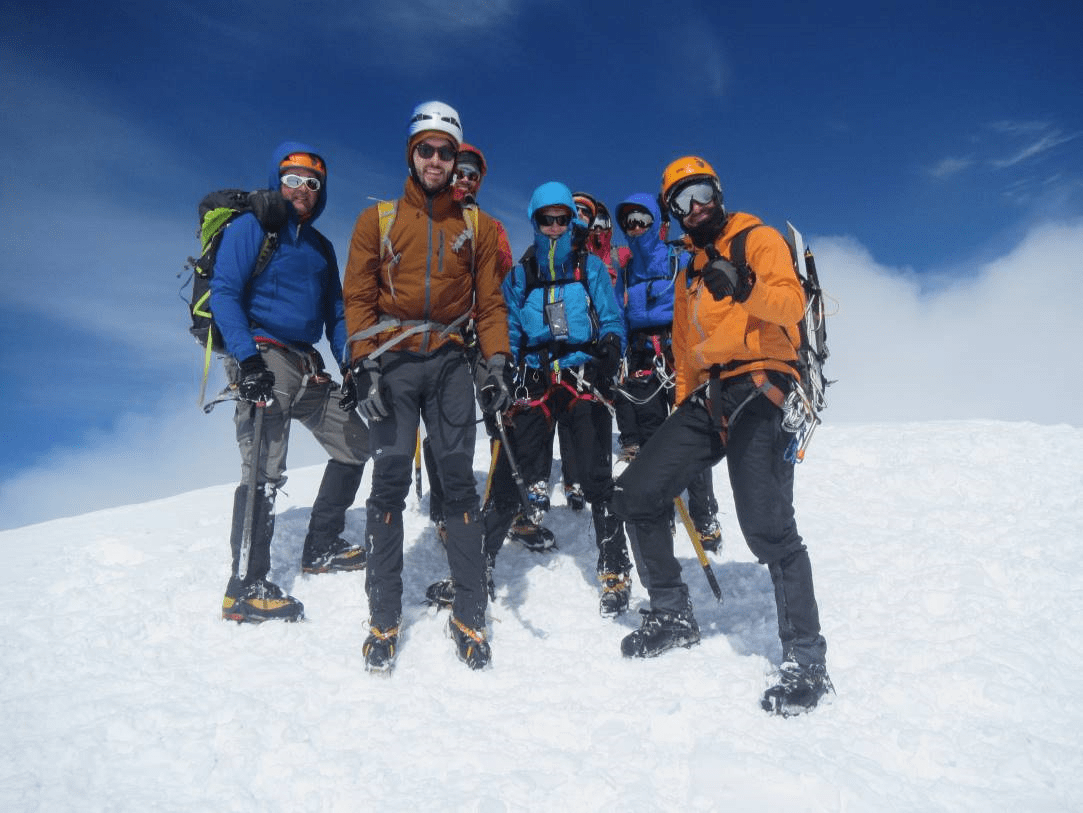 The purpose of running the trip as an Alp1 “PLUS” was to give experienced Alp1-level members a chance to try something with a bit more exposure, and maybe needing the occasional rope to make crossing certain features safer. This proved to be a very popular proposal, and despite this being a Fit trip I had to limit the numbers to 10 … which is a huge group for either an alpine trip or a Fit trip, let alone both. But with the great people who signed up, I was confident I had little to worry about.

I’ve not been a member of the WTMC for very long, and my first alpine trip was to the summit of Tahurangi, in 2014. On that day, I took the photo below and I saw the route described on it in my mind, passing over all the summits of Ruapehu in one day except one, Girdlestone (2,658m), which stands alone to the south-east.

I hadn’t yet seen a trip planning such a day-trip before, though I don’t doubt it has been done many times in the past. I proposed to lead this trip last year, but the weather disagreed with the plan. This year, then, was our second attempt and in the preceding week it looked as though the mountain and the weather were also keen to give it a go.

There was a decent enough amount of snow on the ground on arriving at the lodge, but the air was pretty warm and the recent precipitation left me a little concerned about the condition of the snowpack for the next day. But it looked like we had our weather window still, with winds not forecast to build until later in the afternoon, and the avalanche risk at an acceptable level for our proposed route.

We decided on a cruisy start with around a 6:30am departure, as we knew we were to be out all day and there was little to be gained from a pre-dawn ascent on our planned route. A bit of extra sleep after the long drive, however, was very attractive for maintaining energy levels the next day.

It was a fine and calm morning with great conditions for our ‘all-day-pace’ stroll to the summit plateau. The team was so efficient I think I was the last out, and everyone was looking very professional.

It took us around three hours to get to the plateau edge from the lodge, and we went straight for our first peak, Glacier Knob. We were given a most spectacular view of the massif, and the plains all around, though the wind was already blowing faster than had been forecasted.

We’d agreed to head along the west side of the plateau and the crater to the furthest peaks on the circuit, thinking that if on our way back it was more physically demanding than expected – or conditions had changed – it would be more straight-forward for us to retreat to our lodge on the Whakapapa side.

So, after Glacier Knob we crossed the ridge to Dome, then down and up the steep climb to Paretetaitonga. This got our calf muscles singing nicely, and sticking to the east side of Pare kept us out of the cold wind.

We’d noticed the cloud beginning to zip over the ridge from the south for a little while and visibility in that direction had been coming and going for a while. Then suddenly it was thickly upon us in what felt like a more ‘permanent’ way as we descended Paretetaitonga. Fortunately we had some expert navigators with us and with the persistent strength of the wind we made the call to delete the long exposed walk up past the unnamed peak and Tahurangi Peak. A tough decision, but I think the right one.

So, we headed due east across the north edge of the crater lake in the hope of giving it a bit more time for the visibility to extend beyond a few metres! The lake remained unsighted until we reached Pyramid Peak, though we could certainly smell the strong sulphurous gusts.

I was very impressed with the team during this period of the day, with everyone keeping a close eye on each other and checking their bearings regularly. The route around the Pyramid Peak led us passed some stunning ice formations that were very worth a loiter, and of course Nick couldn’t help a quick tutorial on sticking an ice screw in!

The mountain generously gave us another moment of clarity at Pyramid Peak – another glimpse at the incredible landscape up there.

After second lunch we pressed on to our fifth peak – Cathedral Rocks. The weather was starting to feel more benign as we approached and gained the high ridge just below the icy tops. We could clearly see our intended direct route up to Tukino and Te Heuheu across the plateau. This sight – combined with the knowledge that we were ahead of schedule – tricked us into thinking we had the time to play, and a few people wanted to practice some rope skills.

It was here that I probably used poor judgement in trip planning, as it wasn’t long before the weather closed in again to our thickest white-out yet. We gathered our toys and aimed for the saddle to the north-west of the plateau, where we would have the choice to follow the ridge round for the final two peaks if the weather once again lifted. It didn’t and so neither did we … our descent began and we’d have to settle for 5 out of 10 peaks this time. Considering the conditions, though, we came down with an overall ‘glass-half-full’ feeling!

Sunday was a mighty soggy day. A few of us ventured out for some rope skills practice, with Nick H, Gareth, Tina and Nick B being the most hardy, while Emily and Elisabet showed their experience by remaining cosy and dry in the lodge.

And that was that for another alpine adventure.

Nick H shot some great footage and made another fantastic film :