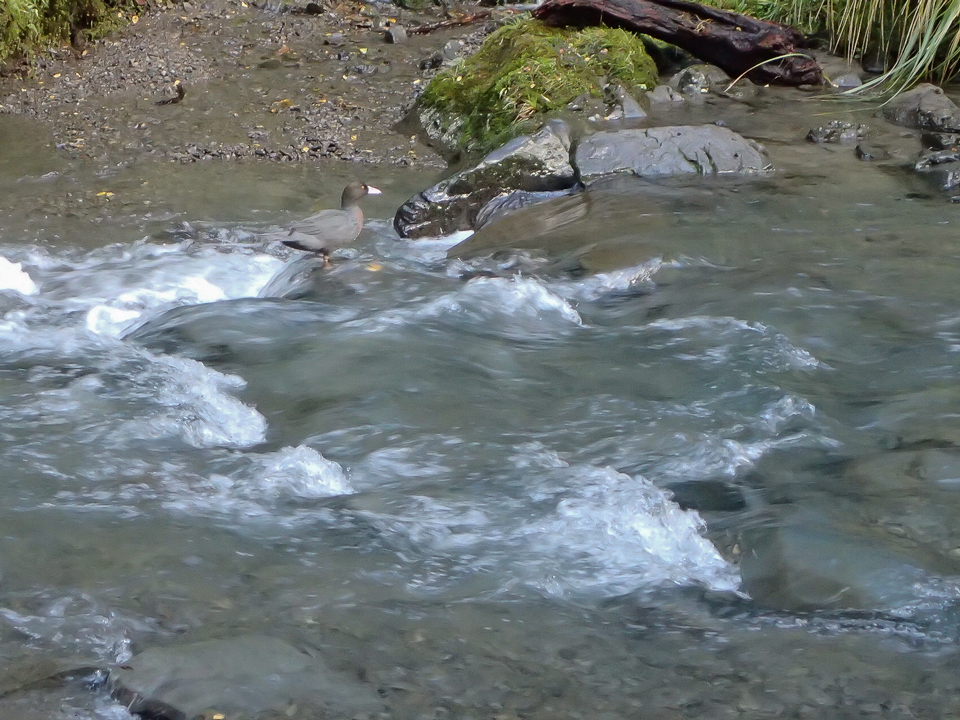 We’ve had an exciting year managing our Eastern Ruahines trap line. Not only have we fulfilled our target of checking the line every month but we’ve also added a new section of self-resetting traps down an untracked ridge, where we found evidence of kiwi.

Since it was installed in March 2015, WTMC has been taking care of a line of DOC 200 traps in the Upper Makaroro area of the Ruahines. These traps are designed to catch stoats, which are the main threat to whio (also known as blue duck). Whio live in fast-flowing mountain streams so can’t be protected in islands or sanctuaries (where this habitat doesn’t exist). There are fewer than 3000 whio left, and if urgent action isn’t taken to protect them, they will become extinct.

Whio are most vulnerable to stoats when they are on their nests—stoats will steal and eat their eggs and kill and eat their chicks. Once they are fledged and leave the nest adult whio can generally protect themselves. So our efforts are aiming at keeping the stoat population down to help chicks hatch and fledge. And we are starting to see larger numbers of adult whio (and chicks) in the catchments that are being protected, which is really encouraging.

Our line is just a small part of a wider network of traps in the Ruahines, sitting under the Ruahine Whio Protectors banner. There’s a big network on the Western side of the Ruahines, spearheaded by Janet Wilson (who was nominated for outdoor hero of the year in the 2017 Wilderness Awards).

In May, I was lucky enough to be part of a DOC-organised volunteer trip to install a new section of self-resetting traps in our line. We choppered into Upper Makaroro Hut, made our way to the Upper Makaroro headwaters and bush-bashed up a ridge to the north, laying traps all the way. These new traps are Good Nature A24s, which are self-resetting. This makes them much more effective, because they aren’t limited to killing just one predator between checks.

During the climb up the ridge we found a kiwi feather and droppings. I would have walked right past but luckily a DOC expert was on hand to spot them and provide positive identification. The reality is that finding concrete evidence of kiwi not only strengthens the argument for our trapping network, which is obviously helping kiwi too, but also the argument for the funding we need to expand and maintain it.

Since our line was installed in March 2015 we have dispatched more than 120 predators, with more than three-quarters of these being stoats. Catches are decreasing over time, which might mean that there are now fewer predators in the ecosystem—or that the ones remaining aren’t temped by the current traps. A multi-pronged approach is really important to predator control, which is why we’re thinking about new types of traps and baits, and why we were pleased to see DOC doing a 1080 drop in the area recently.

We’re hoping to install some very realistic plastic “eggs” in all our DOC 200 traps. These provide a visual cue and—unlike other bait and real eggs—won’t be eaten by mice, which can be a problem at certain times of year. We’ll keep up with our monthly rebaiting of traps and keep experimenting with different edible baits. We’re baiting our A24s with stoat-focused bait, which means we can’t use the lure pumps that are designed to last longer periods. And we will need to replace their gas cartridges at least once a year.

Together with Lisa and Geoff Whittle, who check the lines to the north of ours, we have put in a bid to the DOC Community Fund to strengthen our networks by adding A24s next to DOC 200s. There is good evidence that having two traps in the same location is much more than twice as effective. Hopefully we’ll slowly gain enough funding from different sources to add A24s across the entire Eastern Ruahines network over the next few years.

There are lots of opportunities to get involved in our trapping work. We regularly put trips on the club schedule and these can suitable for people at any level—we try to run EM and MF trips on the same weekend. Because we often split up into pairs or smaller groups to check traps, you can do exactly as much (or as little) as you want. The micro breaks to check traps also make uphills less tiring! You don’t need to have any trapping experience to sign up for a club trapping trip—we are very focused on safety and every trip includes instruction or a refresher on how to check traps.

Once you have learned the ropes, you can join our Facebook group where we organise other more casual trips. Our aim is to check the line once a month, so 12 trips a year. Even just going once a year is a huge help. It’s also really helpful if you can sign up to lead a club trip or put one on the schedule.

If you want to know more about trapping, talk to me, Tony or Illona (just ask the person on the door on Wednesday nights to point one of us out). Or sign up for a trip!

Or you could check out:

An article in Wilderness about ‘tramping with a purpose’

Shauna’s great write up of a recent EM trapping trip