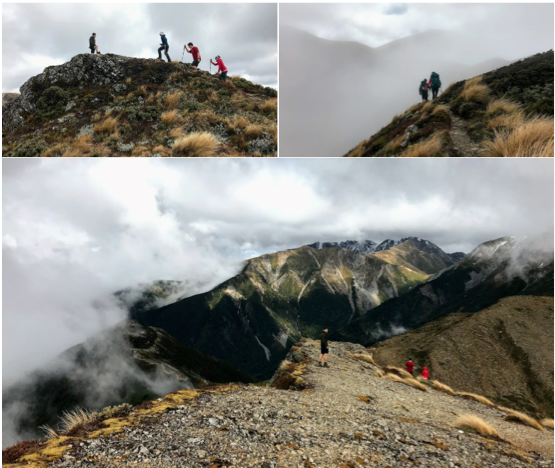 We set off from the railway station on Friday afternoon together with the Easy group and drove the 4.5hrs to the trailhead (I highly recommend our kebab stop at Istanbul in Carterton along the way). The road to the trail head has probably seen better days, so the last few kilometres were a bit bumpy and involved the opening and closing of a few farm gates. We spent the first night at Triple X hut, which is a short 10min walk from the trail head and easy to find in the dark. Just watch out for the alien sheep on the way with their scary blue shining eyes!

The next morning, the five of us in the Easy Medium group started out on our adventure (minus – we thought – 1 blue spoon lost in Triple X). The first part of the walk to Top Maropea hut is a straightforward slug up the hill to Sunrise hut. The track is well maintained and family oriented. We got to Sunrise hut within 2 hours and had a quick look around at this large, well equipped hut with its stunning views. Sunrise hut was our Easy group’s destination and they were definitely going to have a comfortable stay.

Right behind Sunrise hut, the track continues onto Armstrong Saddle, but not before passing a doc sign warning about the dangers of continuing on. The track, the sign says, is only for experienced trampers and should not be attempted in high winds. The name of the saddle doesn’t give much confidence either, being named after an aeroplane pilot who crashed here in high winds. Bram confirmed the track’s exposure to high winds. He was attempting the track for the second time because the winds had been too strong at this point last year to be able to stand up. Luckily for us, it was still. The clouds hung low over the saddle ahead and they swirled and broke apart to reveal amazing vistas of mountain tops, steep valleys and patches of snow. We felt like we had stepped into the Southern Alps.

After our little detour, we continued on our way along another stunning ridge and down into the trees to Top Maropea hut. The walk from Sunrise hut took us just over an hour minus the detour.

Top Maropea hut is a bright orange old forestry service hut, and it quickly became apparent why this is a free hut. The insulation mats against the corrugated iron roof had half disintegrated and were missing in places, there was a hole in the floor and another in the door and someone had left all their litter behind. This galvanised Tash into a cleaning spree that we were all very grateful for, and within half an hour the hut was slightly more presentable with a swept floor and wiped down mattresses. Bram and Mike nevertheless opted for their tents and set them up while Bart, Tash and I made ourselves at home in the hut. 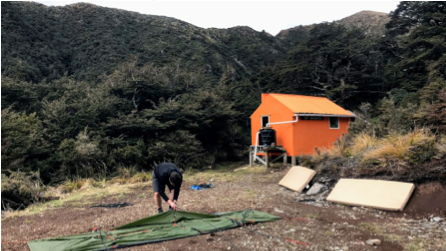 Since it was only 1pm, we had some lunch in the sun and then set off to explore the rest of the path. The path supposedly continues on from Top Maropea hut for about 1km before abruptly ending at the river. We soon realised, however, that this path involved a lot of very steep clambering and slipping and sliding. So after stopping to enjoy the view of a waterfall, we continued back up to the hut, collecting firewood along the way. There was no firewood at the hut, and everything we found was damp, so we had a fire for all of 30min before we it started smoking us out and then petered out altogether. It was now only 5pm and we had exhausted our activity options, so we cooked dinner to stay warm and searched for two lost blue spoons and a lost blue hat. By 7pm we gave up and all went to bed, propping up the spare mattress against the hole in the door for warmth.

The next morning, we were up bright and early and got going quickly to get warm. The wind had picked up overnight and gusted around us along the ridge back to the saddle while the clouds hung low all around us and obliterated any views. This did not bode well for the saddle. And indeed, when we got to the saddle the winds were so strong that we had to inch across it. We crouched low and took the saddle a few steps at a time, stopping every few steps to hunker down as gusts of more than 100km/hr swept past us. We reached Sunrise hut with adrenalin coursing through us and high fiving each other as if we had just won a race (the only thing that did not withstand the wind was one of Mike’s many blue hats). Elated, we walked into Sunrise hut where the Easy group was just getting up, and responded groggily to our excited descriptions of the sheer force of nature that we had just endured. After some well-earned brownies, tea and sitting by the fire, we ambled down the hill to the car and drove back to Wellington.

It was a great weekend that was well planned by Mike, and we all bonded over our ramshackle hut, missing blue items and battle with the elements.