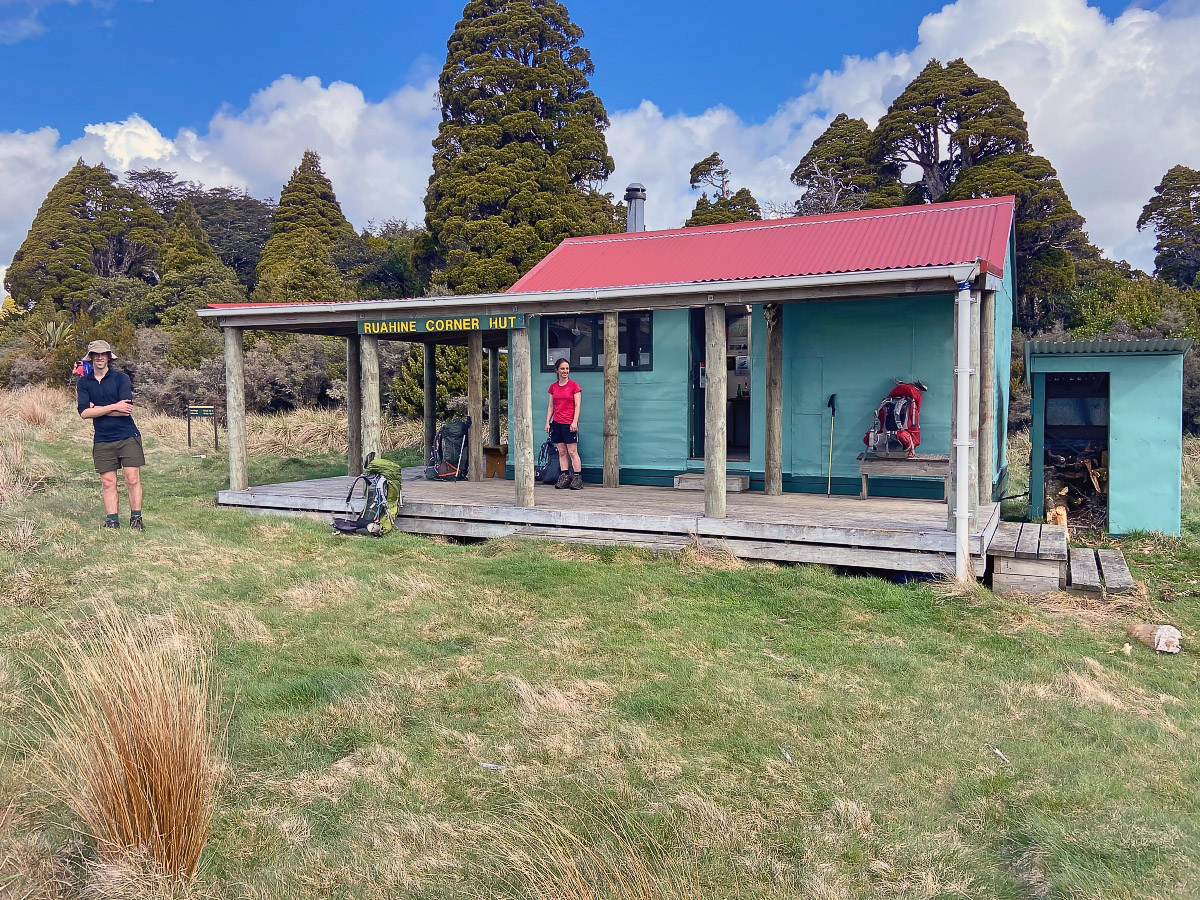 Any trip worth its salt has an epic long drive and it seems this one was no different – it involved Matt having to do a superb job navigating around a pack of farm dogs that seemed intent on stopping the club van progressing up the road – I think they got the club van confused with the sheep they were trained to herd!

Arriving at the roadend we immediately noticed the farm sign on the gate that said to beware of the bulls and keep the gate closed – the gate was wide open, which didn’t seem to bode well for us. I was now having visions of getting chased up to Sentry Box Hut by a pack of angry bulls in the dark – luckily the field was completely empty and the only drama was Batty falling into some mud in the first 5 minutes of the tramp. I knew there was a reason I had put myself at the back as tail-end Charlie!

Sentry Box Hut looked very inviting to stay at after the long drive but we had to get ourselves up the hill to Parks Peak Hut if we wanted to have a good shot of reaching Ruahine Corner Hut. This is a punishing climb for a Friday night but it was a beautiful clear night with a lovely night sky so I really enjoyed it. We made it to an empty Parks Peak Hut just after midnight after taking it easy on the climb.

Saturday morning we woke up to the sun shining – it had been a few years since I had last been in this area so it was great to visit Upper Makaroro Hut again and see all the traplines along the way that the club does such a fantastic job maintaining. After Upper Makaroro Hut it was all new country for me – it was straight up again to point 1503 via Totara Spur. The long slog up the spur was worth it with rewards of amazing views over the Ruahine Main Range, across to Kylie Biv and back over to Parks Peak. Matt said he had been up there four times and never once got clear visibility until our trip – it must have been all the sun dances I had done during the week. I really enjoyed walking along the tops surrounded by the tarns – I had introduced one of my running friends to the word “tarn” over summer but she remained unconvinced and preferred calling them a puddle of water.

Coming off point 1503 we found a junction sign for Lake Colenso stuck in leatherwood – I guess leatherwood has some other uses aside from ensnaring unsuspecting trampers. We could actually see Lake Colenso – it’s definitely on my list to visit now as it looks like a lovely hut to stay in. We found a few small patches of snow along the way and Jamie had fun popping the snow under her hat to cool down.

The last part of the track to Ruahine Corner Hut follows a craggy ridge that has some dramatic rock formations and spectacular views back to the main range. The hut itself is right at the edge of the Ruahine Range and as you emerge from the bush onto a plateau of tussock it actually feels like you have been transported to a different world.

After a dinner of satay noodles and chocolate we had fun reading the intentions books that was dated back to 2017 as the hut doesn’t get a lot of visitors and most are hunters who have flown in. There were some entries from a group who had named themselves “Yeti & Weta”; an Auckland tramping group who had given themselves individual identifiers next to their annual hut passes such as “Flogging us”, “struggling”, “ambling”, “carrying wet gear” and “walking fast.” One of Batty’s favourite entries was from a group who said they were going to camp at “Unknown Campsite” which turns out is actually a place on the topo map south-west from Lake Colenso Hut. My favourite entry was from the DoC Snail Monitors who had several entries in the book – under the main activity section of the book they had written they were “snailing” in one entry. Another group had written they were stalking the snail hunters and that the snails were roaring! These snails are the Powelliphanta Marchanti snails which are a near threatened species and are most commonly found in the Northern Ruahine. There were a few shells in the hut that unfortunately I forgot to take a photo of – one recent snail hunt found a snail that had a shell of over 56mm! With the incredible work done by the DoC snail monitors on predator eradication, hopefully these snails will maintain strong numbers in the Northern Ruahine.

Unfortunately for Jamie and Matt squared, Batty and I had possibly consumed a little too much chocolate and spent the evening talking endlessly about “snailing”, searching for Ruahine Mountain Dolphins and giggling at how I went to find the toilet in the dark and nearly fell down a rabbit hole – luckily my name isn’t Alice. The next morning Matt squared said ear plugs were a beautiful invention – apparently we were both completely batty and crackers the night before.

On Sunday we walked back up to point 1503 and while it was still sunny, there was a stiff wind that meant we had to layer up. We saw two people in the far distance above Totara Spur but aside from these two we saw no one else all weekend. We bagged Piopio and had lunch at the top of one of the climbs – couldn’t get a better view for a lunch stop. Finding the track just under point 1396 wasn’t as obvious as I expected. Luckily Matt spotted a rock cairn that led down the hill before we found a track marker about 5 minutes later. From here it was a well marked track that had recently had some maintenance down on it. We got to Aranga Hut around 3pm. We had planned to camp here as Aranga Hut is derelict but as we got there early and there appeared to be bad weather chasing us down, we decided to continue on down to Sentry Box Hut for the night. Some of us did a 5 minute side trip out to Pohatuhaha Trig. Getting back to Sentry Box Hut is a knee bashing descent – like abseiling without a rope especially if you are not a fan of downhills like me. Luckily I was behind Jamie who makes going downhill look easy so I was just following her steps. There were a few slips or as Batty called it “slippage”  – when you simply sit down and slide down on your shorts – apparently Batty’s shorts were a bit lacking in this technical feature.

On arriving at Sentry Box Hut, Batty realised she was close to 50,000 steps for the day so she decided to do laps up and down the track to make it up to 50,000 steps while Matt and I cooked dinner, the other Matt sensibly read and Jamie put up her tent. She was still out there going back and forward in the dark!

On Monday morning we just had a 5 minute walk back to the van, which meant we got to stop at a cafe in Norsewood. Norsewood is a really interesting place to visit that I would also highly recommend exploring.