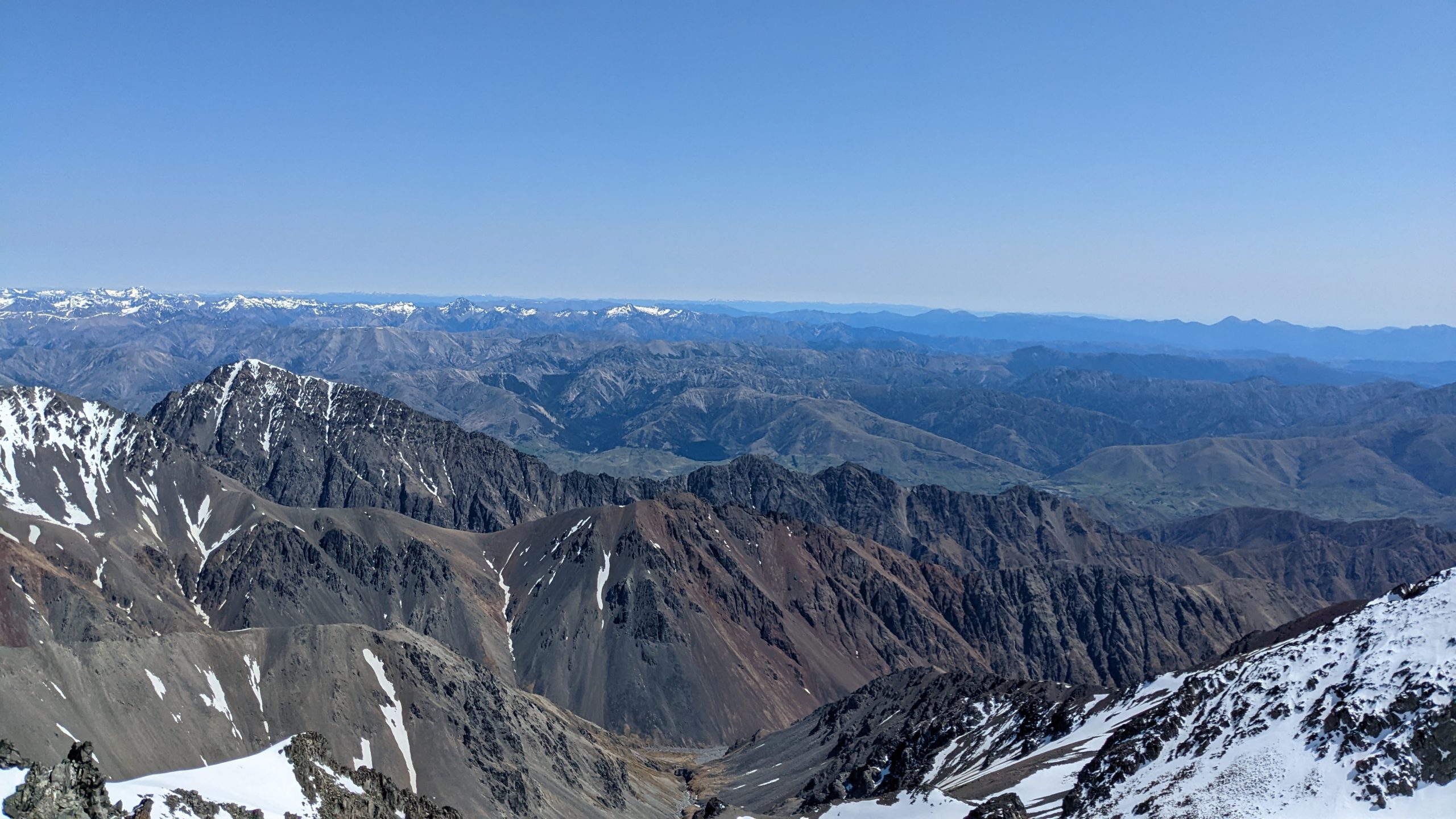 Looking across the Cook Strait my eyes habitually fixate on one striking feature – the centerpiece and highest peak of the Kaikoura Ranges, Tapuae-o-uenuku, also affectionately known as ‘Tappy’. A couple years ago I started consolidating the skills and experience to attempt Tappy and enjoy its panoramic and lofty summit at 2885m.

Miraculously the stars aligned and the best weather an alpinist could ask for was scheduled to arrive on Labour weekend. Ample snow was still on the peak, visible still from Wellington. With a bit of shuffling of the team and administration, everything was in order and myself, Diego, and Christie made our way south to the South Island and to the Hodder River suspension bridge marking the start of our long river approach from the Awatere Valley. Allan, the landowner, strode down to welcome us and after a warm exchange of pleasantries, he relayed the conditions, “The river is clear and in low flow, should be a good one up the mountain!” We made a start, excited by our few glimpses of the peak on the drive in.

We crossed, and then crossed, and again crossed the river, its banks and surrounds continually closing in as we made the 100 crossings (as advertised). Trail shoes proved a wise choice for the approach as our feet stayed comfortable and our proper boots dry. Didymo underfoot in the river and dense matagouri on its banks made for tedious travel in the narrows.

Seven and a half hours later, we landed at the tidy duo of Hodder Huts at 1400m where we would base ourselves for a couple nights flanking our summit attempt day. The snowy ridges above gleaned in the twilight as we tucked in plenty of food and carried out final prep for the early start and summit attempt.

6.00am Saturday – The faint morning light and din of the stove roused the three of us from our sleeping bags. We were underway from 7.15am and progressed quickly up the Staircase Stream route, crossing a few bands of snow and small streams cascading from the slopes of the mountain. As we passed the last stream crossing and reached 2000m, the rock gave way to a consistent sheet of snow sloping up the mountain toward the jagged crags marking Point 2711 on the map. Now cramponing up the slowly steepening slope, we made good time and reached a saddle between 2711 and Tapuae-o-uenuku. Peering northeast up the ridge to the summit cap, it is an intimidating sight with its right side nearly vertical and its left side a steep and varied mix of rock, ice, and snow. We skirted up the penultimate pitch and ridge before the summit cap before pausing for a brief break. Five early risers made their way front pointing down the summit face as we watched on. Rapidly approaching our turnaround time and with the winds rising, we made a bid for the summit.

One step after another, we carefully plodded the steep route to the top. Elated, exhausted, and relieved I followed Diego to a point just below the true summit. Expansive views stretched in every direction. To the north a faint glimpse of Wellington and the South Coast, to the east the Clarence Valley, Manukau and the Seaward Kaikoura Range, to the south Mount Alarm, and to the west the peaks of the Richmond and Nelson Lakes ranges.

After a brief celebration and embrace, we made our way down the maunga, the snow now softened in the afternoon sun. As the last light reached Hodder Huts, we returned in time for an early dinner, closing out the nine hour day. The hut was kept surprisingly warm in the day’s sun. The waning sunlight receded to reveal Jupiter brightly shining down. In short order it was joined by plentiful stars dotting the dark ink above.

7.00am Saturday – A welcome sleep in got us off to a relaxed start walking down the Hodder River out to the road. Navigation was easier traveling downstream, though the river was also further chilled from snowmelt. As the river widened and warmed on its path to the Hodder River bridge and road end, we were awarded with a perfect swimming hole one kilometer out. Before departing, we enjoyed a quick plunge to refresh us for the drive and ferry back to Wellington. Sailing through pleasant seas in the Sounds and Cook Strait, we recounted the trip, shared photos, and felt fortunate to have enjoyed such an ambitious trip without any major hitches, in incredible weather and good company.