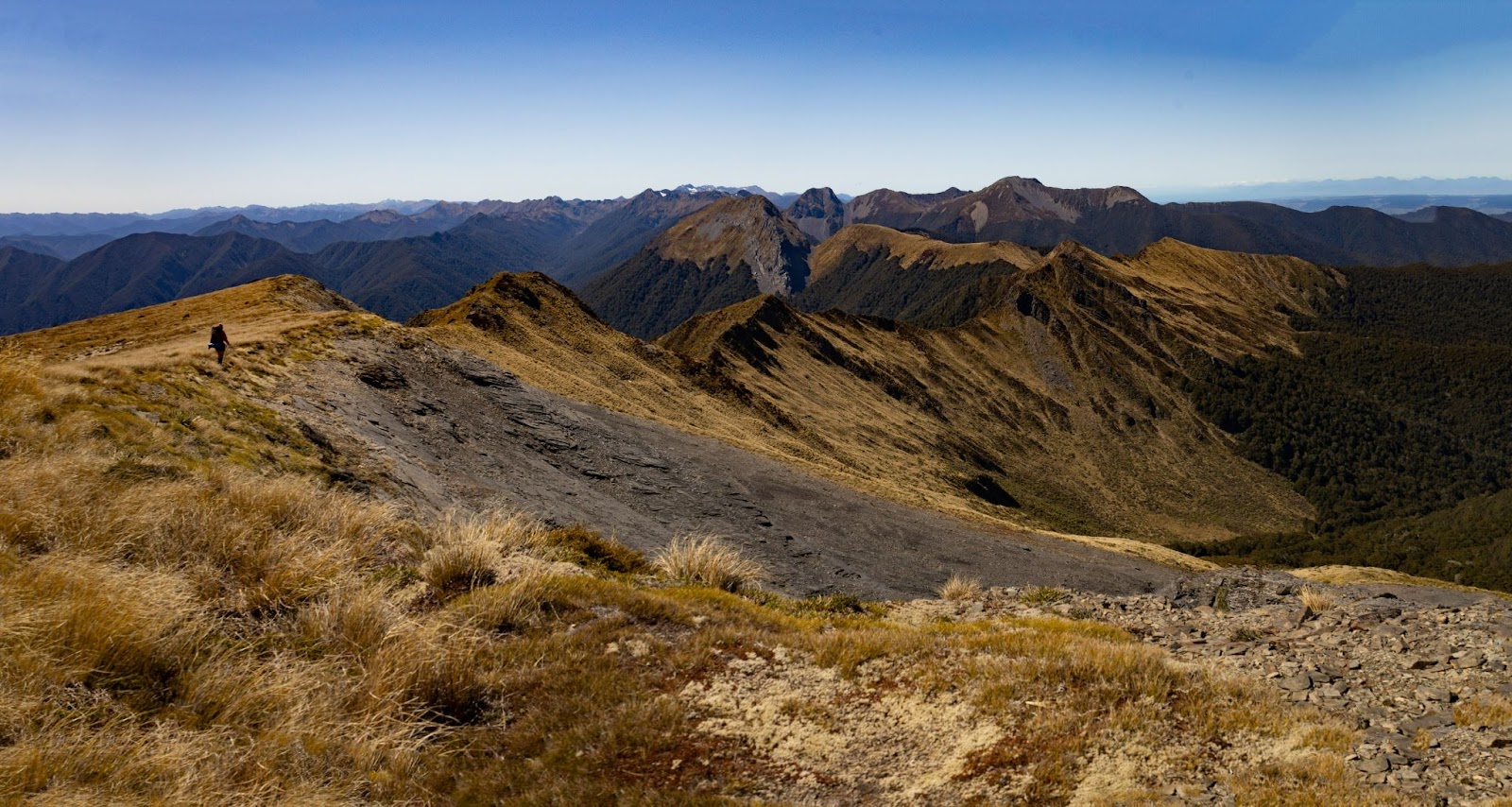 I love a mystery and was intrigued when this tramp appeared on the schedule: Top of the South Mystery Tramp. Jump on the ferry and go on an adventure! Interesting rock formations, travel on the tops and along a river. Good snacks and optional river swims. Expect up to 6 hours walk every day. Track may be rough in places. I was in!

Then hints started trickling in . . we were sharing the van with the kayaking trip going to Marahau . . . we would be staying the first night in Nelson . . . one of the huts had a flush toilet . . . there were tree falls on the track . . . More and more mysterious. Finally, Anne sent out a trip plan for Nelson to Pelorus bridge via Rocks hut, with a warning that there were significant slips on the track.

However, a week before departure Anne confirmed the track was closed so we were back to square one – where were we going? After some research she came back with two options – Heaphy or Wangapeka. The vote was overwhelmingly for Wangapeka but the destination was still officially a mystery.

Friday 21st rolled around so we assembled at Wellington railway station, then departed to catch the 4pm Interislander ferry. The sailing was uneventful but there was just enough swell to make some people queasy, and we arrived in Picton ready for the next stage – driving to Marahau to drop off the kayakers and spend the night. Anne had found space at Old Macdonalds Farm and Holiday Park – a lovely 4 bed cabin.

We woke early on Saturday, had breakfast under the watchful eyes (and beaks) of the local chickens, then set off for a pre-tramp coffee and snack at Motueka, before driving to the start of the Wangapeka track. The weather was good, the river at Dart ford was not even up to the level of the concrete roadway and the Wangapeka river looked eminently crossable for our planned return leg. We left the van where we planned to exit and walked the final few kilometres to the start of the track.

The tramp proper started at Rolling River bridge and we walked for a few hours along the Wangapeka river, stopping for lunch at a convenient clearing. The track is gently undulating, allowing good views of the river and surrounding hills. We reached the Kiwi Saddle turn-off in the early afternoon and discussed our plans. We agreed to split into two groups – the mediums who would complete the planned trip to Kiwi Saddle hut then back to the start via Mount Patriarch and John Tait hut, and the easies who would continue along the valley. A true easy-medium tramp.

We walked for another half hour then arrived at King Creek hut. It was empty so we decided to take a bunk room each. However we were joined by a family of four, and then later by an older couple so we generously offered them the use of ‘our’ bunk rooms – still lots of space with only 8 people in a hut that can hold 20. It was pleasant company, with good conversation. The older couple had started, and then sold, a company making freeze dried tramping meals and it was fascinating learning the differences between dehydrating and freeze drying food and tasting some samples of their freeze dried food. In conclusion, I think the club could invest in a freeze-drier.

The weather on Sunday was perfect – not a cloud in the sky with a very light breeze – so we continued up the valley with a day walk to Stone hut and return. First was a brief stop at Cecil King hut. It’s been restored and looks comfortable – in a rustic way. Great for a group of four.

The track to Stone hut is well benched and easy going. Stone hut is nicely situated with a view over a grassy flat to the river. Plenty of space to sit, enjoy our lunch and then snooze in the sun. After an hour or two we walked back the way we came, enjoying the track, the weather, the bush and the birdlife. On our return to King Creek hut the family who’d remained there gave us directions to a swimming hole and Katie was able to go swimming with the whio. Then an early night.

On Monday we woke early because we had a long day of travel to get back to the ferry. The weather was reasonable and it was a brisk walk back down the track to meet the mediums. There was enough time for a refreshing dip in the river before setting off to Marahau for the kayaking group.

After saying our goodbyes to the Easies, and reluctantly accepting we wouldn’t get to taste David’s homemade dehy shepherd pie and apple crumble, we headed up Kiwi track – a gentle gradient with minor windfall, and took our time to reach Kiwi Saddle Hut. Only one other person was staying there and we had plenty of space to spare. After a little break to get changed and enjoy the last bits of sunshine we feasted on a nice mushroom risotto and were tucked in bed by 9pm.

We had a slow ish morning on Sunday and left the hut at 8am on the dot. The climb was a bit of a slog at times, and we stopped a few times to check whether Lynsey’s water bladder was leaking – it was not! After enjoying the morning sun through the trees, we finally reached the bushline. We dropped our packs and made a quick return trip to Mt Patriarch. The track was rocky but mostly straightforward, and we found some helpful cairns marking the most practical way to reach the summit. The views from the top were incredible, looking South at Mt Owen, West at Big Tops and Mt Kendall, North towards Mt Arthur, and West all the way to Tapuae-o-Uenuku.

Once back down, we travelled along the ridgeline and enjoyed some more views of Kahurangi National Park. The track was mostly easy to follow and to walk on, but had sections that were quite exposed and may not be recommended to people who aren’t comfortable with a bit of scrambling or who are scared of heights. After a leisurely, hour-long lunch, the wind started to pick up but we made good time along the track. After spotting John Reid from the tops we decided to take the shortcut and head straight down towards it – which involved some fun and effective bumsliding on the tussocks, and less fun walking on uneven ground to the hut. We found the hut empty but were quickly joined by a friendly party of three for the night, who ate sad looking redox meals while we enjoyed another delicious mushroom risotto and a chocolate fondue for dessert.

On Monday, we got up early and headed off at 7am. The track awkwardly sidled along the slope for a while, until we reached the bushline and headed down the spur. The track required a little bit of route finding on the last section, but we made it down without trouble. After a solid three hours we reached the river, and resigned ourselves to cross the knee-deep river after three days in dry boots. A quick rinse/swim in the river, before picking up the Easies who were right on time.

Then it was drive back to Picton and the ferry home. It was Bluebridge this time and there was a discussion about which ferry was better – I don’t know whether we definitively answered that one. The ferry was running late and we thought this might turn into a five day trip but we made it back on to dry land with seconds to spare, rolling off the boat at 11:59:58pm.

Overall this was a true easy-medium trip: we did both and had a great time. And, yes, it had everything that was promised in the trip schedule, plus great weather and great company.