First of all, if you’ve never done the snowcraft course or been on trips in the snow, I would highly recommend doing the course – or having a go 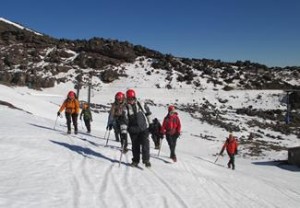 and getting ‘stuck in’. The alpine environment is beautiful, challenging and requires a whole new set of skills. We had a good mixture of weather conditions over two weekends up at Ruapehu – everything from black ice on the road (picture the van sliding backwards with the brakes and handbrake on!) to energy-sapping knee-deep snow to almost full white-out conditions…oh and yes, the sun did make an appearance too.

Our first weekend started with some true winter conditions on the Friday night on the Bruce Road up to the lodge, all looked very wintry with snow at the side of the road. The patch of black ice on the road saw us abandon the van to walk to the lodge while Marie and Mike got the chains on and managed to park the van nearer the lodge.

After a hearty breakfast on Saturday (how many trips have bacon!), we headed out to practice some snow techniques. The snow was too soft and deep to don our crampons but walking in deep snow is a skill in itself and 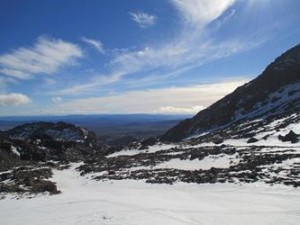 was good practice. It became important to assess the terrain to conserve energy. We determined our goal was to take the opposite routes to those of a snowboarder (as a skier, I had to adjust – deep powder was no longer my friend). We wanted to stick close to ridges (high winds might change this) and avoid concave basins where the snow would be deeper.

We practiced techniques walking in snow. Going uphill in knee-deep snow? You can kick those toes in and go straight up if you’re feeling keen and have a spare lung – but traversing and kicking the edges of the side of your boots in saves a lot of energy. We tried to ensure we made good steps for those behind us and rotated the people in front doing all the hard work cutting steps. Going downhill, we resisted the urge to have a good slide, and kicked our heels in, walking downhill in control.

Come the afternoon, the weather was packing a bit of a sad (as they say) and we based ourselves close to the lodge…cue project ‘Mr Magoo – I’m gonna build me an IGLOO!’ The group engrossed themselves in various activities such as building snow caves and flat p 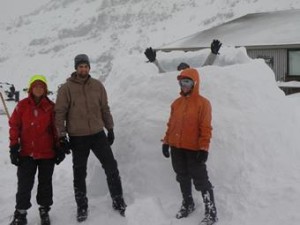 latforms for tent laying while our in-house team: Adam, Doug, Emily and Fiona plus an assortment of helpers at various times set themselves the task of building an igloo. The team filled plastic boxes with hard-packed snow to create ‘bricks’, a bit similar to making sand castles in the snow and house-proud Adam and Doug, meticulously placed the bricks and smoothed the walls. The construction continued into the darkness but our team didn’t give up and come dinner time, possibly the greatest igloo in the history of Ruapehu had been completed. To demonstrate their faith in the construction, Adam and Doug slept the night in the igloo (although they were still in the lounge when we went to bed and were not in the igloo in the morning when we got up – we’ll just have to take your word for it boys).

Sunday saw us leave the mountain early. The mountain was in medium stroppy mode by now and we dug the van out and drove down a slippery, snow-covered road. A good call made by Marie since the road was closed shortly after we made our escape.

We returned to the mountain on the second weekend to much less snow (and a melted igloo) and more suitable conditions for testing out our crampons. We headed up to a gully beside the Pinnacles for some practice. No more digging in those boot edges or heels, we now had to maximise the point of contact of the crampons which called for some flexible ankle work when sidling around slopes. After some deliberation, we settled the discu 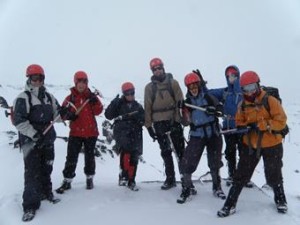 ssion that while generally you don’t need to ‘kick’ steps when wearing crampons, this changes when walking in deeper snow where you might need to kick through the soft snow to get a grip with the crampon. We found descending sun-melted snow slopes wearing crampons felt much better when we down-climbed, with toe kicks and our axe.

The melting snow caused small rocks to become dislodged and fly down to our gully so we retreated to the lodge for some lunch and ice-axe arrest and navigation practice.

We arose on Sunday to reasonably good conditions and headed off at 7:15am for an attempt to climb Mt Minger, as she was later named. We hoped to reach Dome shelter near the crater lake if the weather was kind and we continued uphill along delta ridge where the instructors satisfied our sugar needs with a steady supply of jelly beans. We had a good break at delta corner (2010m) outside the NZ alpine hut. The club members looked cosy in their hut as we executed ‘the penguin’ and some groovy dance moves outside to keep warm.

We continued on above 2200m in diminishing visibility with our jelly-bean-fuelled group sticking together at a steady pace. We were approaching white out conditions and the skills of our chief navigators using altimeters and GPS became increasingly important. As we turned onto the ridge above the plateau, the precipitous drops besides the path appeared as flat ground in our goggles and we decided it was safer to retreat rather than continue to Dome shelter in dangerous conditions. We felt a height of 2600m was a good achievement for the day. Mt Minger had challenged us well and left a lingering temptation to return another day…