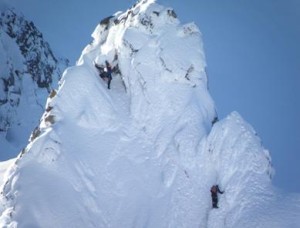 Planning mountaineering trips like this in advance you hope for at least one goodish day out of two so that you can get to the summit. This time was different – the forecast was brilliant 5 days before and fell to a little windy by Friday. The only problem with weather like this is the mountain gets crowded. We knew of two other groups heading up just from Wellington. We therefore drove up to Ohakune in ‘high hopes’ (or in the WTMC van as some call it).

An early start on Saturday saw us walking for a while with the Tahurangi group before Mike and I took the turn to Girdlestone. We headed around the back towards the south slopes. The snow was hard and occasionally icy which boded well.

We headed up the south slopes and probably could have found a route without getting the rope out, but that wasn’t the idea! Mike spotted a 40 m pitch of 60 to 70 degree snow and ice off to the side and away we went. Another pitch and a half of 50 to 60 degrees took us to the summit.

Here we met Simon, Lorraine and Elizabeth and we sat down for lunch and a chat. As it was only 1pm we discussed some time fillers and decided to try the ridge up to Tahurangi.

A soft snow down climb got us onto the ridge and away we went. Michael passed the first main gendarme whilst I looked up and saw a nice ice gully which seemed to have been in the shade. I pointed this out and Michael enthusiastically climbed the far more vertical mixed rock and ice next to it. This involved good axe placement as sometimes they were used to haul ourselves up!

We did not have enough rope to top out and so a half pitch involving a near vertical down climb was needed to get us to the top and the obvious belay. I wondered if the route we had taken had been climbed before. Certainly the gully had, but we took photos as the wall would not often be in such condition.

From there we waved back to Girdlestone where Sharron, David and Marie were topping out after much pitching on the south-east ridge. The descent was a straight forward abseil and the others came over so that they could borrow chocolate and walk out with us. The next day saw us over to Tongariro and that is told elsewhere