The one line summary: long drive for an overnighter in an old nurses’ home with a damp tramp to a hilltop hut sauna for fine dining, escaping the worst of the weekend weather. 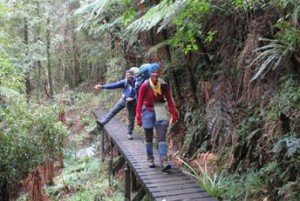 was being lashed by weekend gales and rain, a group of trampers escaped the worst of the weather in the Whanganui National Park. The planned destination was Tahupo Hut, but with the weather forecast looking pretty wet, Illona made a well supported call to go for a Saturday night hut with a fire, Pouri Hut on the Matemateaonga Track. It did mean a slightly longer drive around to the West of Whanganui National Park.

After a Friday evening 6pm station departure, we reached Stratford at about 10:30 with a short stop in Bulls to eat. The Transmore Backpackers (ex-nurses’ home) provided a $20 comfortable overnighter and we hit the road the next morning for another hour’s drive to reach Kohi Saddle at the western end of the Matemateaonga Track for a 9:25am start. The track follows an old Maori trail and settlers dray road. The whole 43km could be easily walked in 3 days, but would need a pre-arranged jet-boat pick-up on the Whanganui R 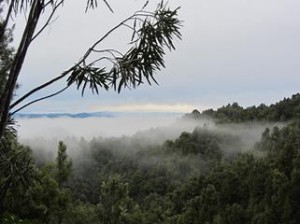 iver at the eastern end.

About 200m up a road from Kohi Saddle, the path broke off left over a stile onto a pretty well maintained track. Apart from one scramble around a wind-blown tree, the track was clear, but slippery in places with greasy mud and some exposed planking where it wasn’t wire covered. The track hugged the contours pretty well and there were no noticeable climbs until a deliberate exploratory leg after lunch.

About an hour from the start, we passed Omaru Hut where a family had established themselves for the school holidays. The bush enclosed the track for much of the route, but occasional openings gave some good views to the north with low cloud lining some of the valleys. The rain held off for the morning and with little wind and mild temperatures, waterproofs were soon packed rather than worn. We made good progress, covering distances in about two thirds of the DOC times. With a few snack stops to keeps us going, we pushed on for a lunch stop around 1pm at the track junction at the base of Mt. Humphries.

After lunch, Murray pressed onwards to Pouri Hut while the rest of us took a small excursion for a couple of km up to the top of Mt. Humphries. Shame the rain spoiled the views. Picking up our packs at the lunch stop, the track continued over similar terrain to the Hut, where Murray had pulled a roaring hut fire out of his magic hat and forced a kit change to shorts and t-shirts. No other hut company; it looked like the last visitors had been the previous weekend.

Megan’s magic hat produced a spread of starter nibbles and Illona orchestrated the preparation of a great pasta dish. Her pudding surprise was berry fruits with sponge biscuits and cream, so we ate like lords. Sleeping bunks had three levels, but the bottom levels were prefer 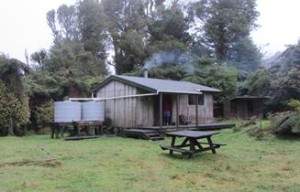 red by those with winter sleeping bags. Too hot above!

Facing a long drive back to Wellington, we were up early for a dawn walking start and a faster pace back along the same route we had come in. We saw some sunshine and blue sky briefly mid-morning, but by the time we reached the minibus around 12:30 the rain had set in. We had enjoyed a pretty good weather window compared to most of the country. However it became stormier on our drive back. The gusts even stripped some plastic trim off the minibus, but didn’t prevent us making the waffle shop in Hawera on Debbie’s recommendation for a late on-the-road lunch. It was a long day for the drivers (Illona and Megan), getting back to Wellington around 7pm.

After hearing the weekend weather Wellington had endured, our trip was a pleasant escape to see some country off the beaten track.